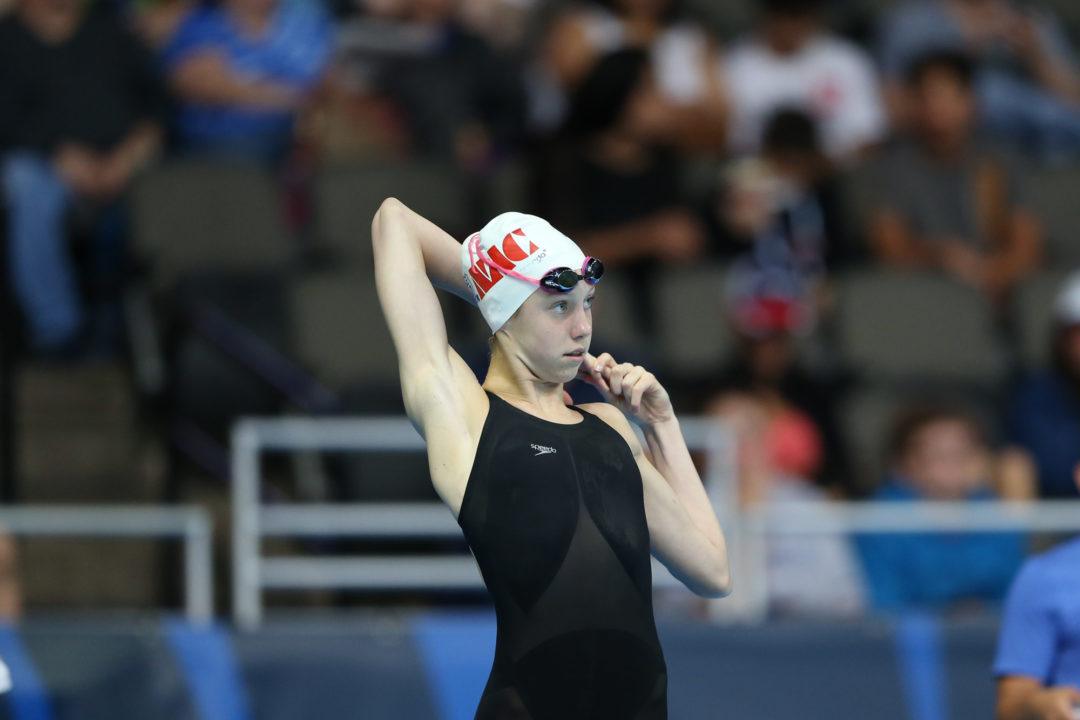 Gretchen Walsh had already been faster than the 15-16 National Age Group record, while she was 14. Archive photo via Tim Binning/TheSwimPictures.com

15-year old Gretchen Walsh has broken the 15-16 National Age Group Record in the 50 yard free, swimming a 21.85 on Saturday at the Southern Premier meet. That’s also a personal best for her, undercutting her own previous best time of 22.00, done when she was just 14 at Winter Juniors – East in December.

Although she’d already been faster than the old record, she had to await her 15th birthday to go after the 15-16 age group records, which were set by matching 22.04s from Simone Manuel at the 2013 NCSA Junior Nationals and Kate Douglass at 2016 Winter Juniors. Douglass did her time when she was just 15 as well, while Manuel has gone on to win Olympic gold.

Walsh’s older sister, 16-year old Alex Walsh, placed 2nd on Saturday in 22.08. That moves her to (now) 4th place in 15-16 age group history in the event. Between the two swimmers, they hold a combined 10 National Age Group Records now, including 2 long course relays that they’re both on. They would have more relay records, but again, Gretchen was too young at Winter Juniors, so their relay swims didn’t fall into any official category in spite of in at least one case being the fastest 18-and-under marks ever. In short course, Alex has 6 records, while Gretchen now has 2.

I think Tammy Touch Pad Error might need to consider a name change ?

For a 15 year old? Any age this is incredible, she would have gotten 8th at NCAA’s last year

Congrats to Gretchen. That’s fast. She will easily break the 25-second barrier next summer. And why not a qualification for Pan Pacs in the 50 free?

She could honestly be second or third. Weitzeil is having a good year though.

How would you like to face those two young ladies at your neighborhood summer league meet.

So many outstanding swimmers coming up through the “ ranks “.
Thank you GOAT – MP – and many others!
Taking swimming more than “ main stream “ –
Thanks for swimming beyond college and earlier beyond high school (girls).
Love seeing people being empowered.

Just wow. And 22.0 for big sis — amazing swims from the Walsh sisters. Future is BRIGHT!

BTW does NAC and Coach Morse still do 80k per week in yardage at peak training? Coach Troy type philosophy?