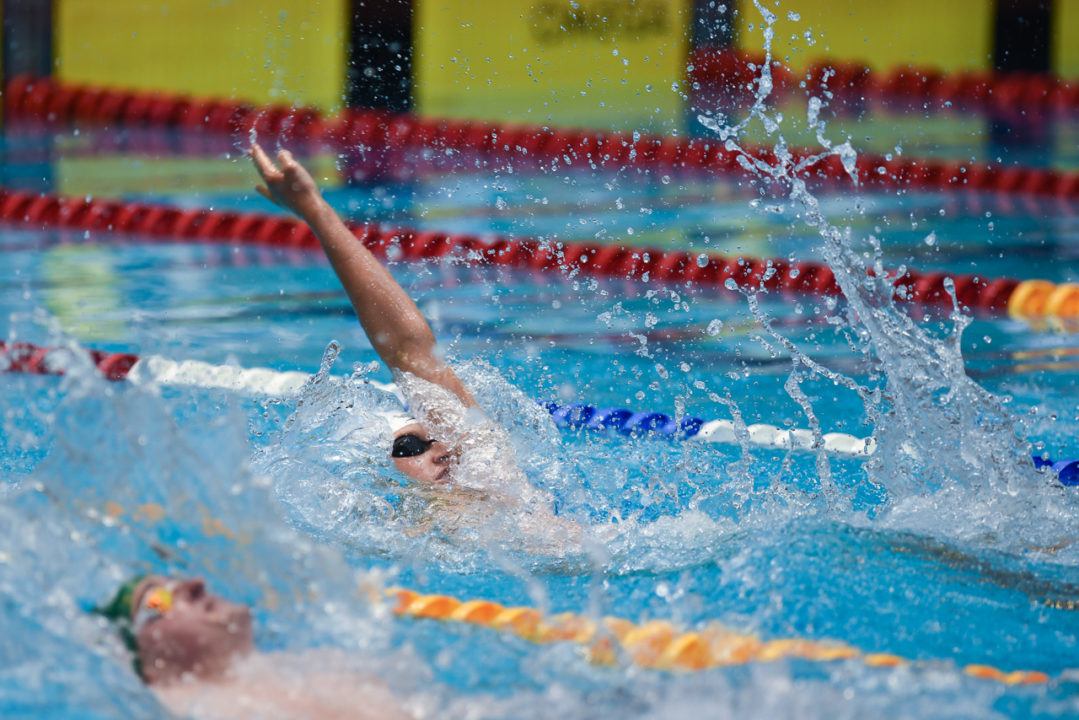 Great Britain fell just .06 shy of a World Championships medal in the men's 4x200, but Luke Greenbank re-introduced himself with a bronze. Archive photo via Peter Sukenik/www.petersukenik.com

The final event on night 6 of these World Championships saw a downright electrifying battle in the men’s 4x200m freestyle relay. Great Britain entered the contest as the most recently gold medal-winning time, claiming the top prize both at the 2015 and 2017 editions of the World Championships.

The combination of Duncan Scott, Calum Jarvis, Tom Dean and James Guy collectively clocked at time of 7:02.04, resulting in a 5th place finish, remarkably just .06 away from bronze as a testament to how close the race truly was.

The nation of Australia set itself apart with the help of Mack Horton’s 1:44.85 anchor split, but the remaining teams were all charging to the wall evenly, with the Russia touching in 7:01.81 for silver, United States taking bronze in 7:01.98 and Italy wrapping up 4th place in 7:02.01.

Although the men walked away without a medal, they have qualified Great Britain for this event for next year’s Olympic Games in Tokyo.

Of his performance, Scott said,“I’m delighted with my leg but at the end of the day I’m just part of the team and everybody was doing their individual legs and I don’t think anyone had a bad swim. At the end of the day we swam very fast, it’s just that was a very fast race. It was a really solid effort and we’ve got to walk away proud.”

For his part, Jarvis commented, “We’re a competitive team and being on the outside was always going to be hard, and I think if we were a bit further in we’d have been a bit more in the mix.”

Finally, Guy stated, “I thought it would be a tough race tonight as a lot countries have stepped up this year. It’s faster than we went in Budapest so it was just a very, very fast race to be fair. That being said we’d rather come fifth here than at the Olympics next year.”

Prior to the men’s 4x200m free, however, 21-year-old Luke Greenbank of Great Britain produced the swim of his life to land on the podium with the bronze in the men’s 200m back tonight in Gwangju.

One of SwimSwam’s quiet contenders entering these World Championships, the Loughborough athlete powered his way to 3rd place in a stacked field, hitting the wall in a time of 1:55.85, a new personal best.

In Baku at the 2015 European Games, Greenbank took 100m and 200m back gold medals, while also collecting 2 relay silvers. He more recently grabbed silver on the Gold Coast as a member of Britain’s 4x100m medley relay. He was right on the cusp of individual Commonwealth hardware, finishing 4th in both the 100m and 200m backstroke events.

Greenbank entered Gwangju with a new personal best 200m back time of 1:55.89 from the British Championships this past April.

Of his race bronze medal-worthy race tonight, Greenbank stated, “To be up in the medals at a World Championship is a dream come true really. I went in there quite relaxed, but confident, and I just stuck to my race plan and it seems to have paid off. I knew if I had a good last 50m I’d be in for a good swim – it’s quite difficult to put it into words.

“I’ve changed my training programme up a little bit this year, doing a few more metres and a bit more volume, so if I keep that going hopefully I can improve on what I’ve done this year. I’ve had a couple of disappointing years so we tried something new with the training and it seems to have worked!”

Bottom line, the 21-year-old British backstroking ace is infusing excitement into the discipline for his nation since Olympian Christopher Walker-Hebborn’s retirement.

Allow me to reintroduce myself… my name is GREENBANK

Good performance for him in amongst some pretty poor performances from the Brits. I expected a few of our athletes to do a bit better like Guy and Wilby (in the 200 breast). I do predict that the next year will be a struggle for GB. But, I think we will improve again in 2021 when some of our juniors come through (hopefully)

Have to disagree. I think we’ve seen quite a few PBs. Hopkin, Anderson, Greenbank, Peaty, Wilby, Dean, Scott, Renshaw, McLay looked great, the relays all swam really well too. Guy moved it on from his poor trials so can’t complain there.

Agree RE Juniors – They’re by some way the best crop we’ve had on the boys side. Not just breaking them, but obliterating them. We look to have some very big talents in the likes of Shanahan, Colbert, Richards, Van Selm, Whittle, Mildred, Cameron Williams. Noticed Ed Mildred destroyed Richards’ NAG in the 200fr from last year today too – Broke it by 1.5s going 1.49.3.

I’m probably just being pessimistic as I want to see my country do as well as possible. Another junior to watch is Kayla Van Der Merwe. I predict that her, Shanahan and Richards make the Olympic team. Daring prediction however the way they are improving I think it’s possible.

Exactly the three juniors I feel could make the team.

Loughborough has become a world class Center for Excellence in elite swimming.