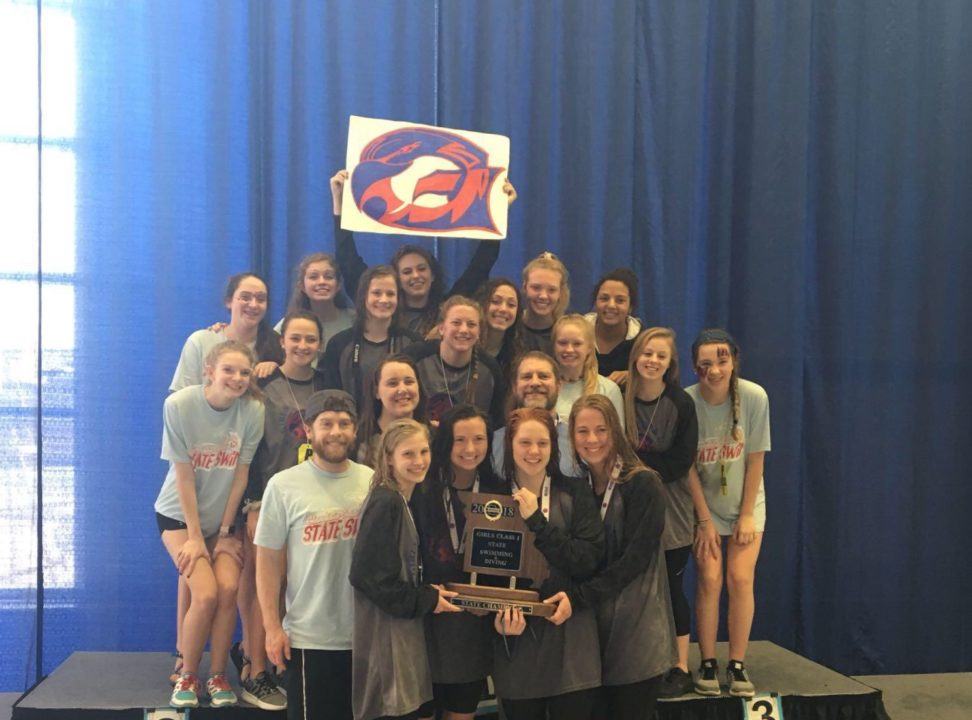 Springfield Glendale relied on depth to put themselves in position to claim the first MSHSAA team title of the new era.  Heading into the final event, the Falcons were at a three point deficit, but were able to secure the top trophy with a final relay that got in the lead and stayed there, leaving no doubt that Head Coach Steve Boyce’s Girls had won the day.

The story of the inaugural MSHSAA Class 1 Championship starts and ends with Glendale making a statement with relay wins. The 200 Medley Relay squad of Maddie Duncan, Danielle Robinson, Audrey Mace and Ashley Baldwin took ownership of the first event with the only sub-1:50 performance. Their 1:49.77 held off Parkway Central (1:50.17) and Kearney (1:52.47) who pushed aside three other teams at 1:52 for the third spot on the podium. The Glendale squad in the aforementioned meet winning 400 Freestyle Relay was Baldwin, Samm Rathjen, Jessi Hicks and Duncan, whose 3:38.12 held back hard-charging teams from Webster Groves (3:39.05) and Summit Prep (3:39.25) to put the stamp on their team victory.

Swimmer of the Meet honors went to Autumn Looney from St Charles, who claimed victory in both the 50 Freestyle and 100 Butterfly events. Maddie Hernandez from St. Joseph’s Academy (24.03) and Kreiling from Kearney (24.33) we’re close behind Looney’s 23.73 for 2nd and 3rd places respectively. In the Fly, she won by a more considerable margin with 54.99, ahead of Battle’s Lauren Naeger with 56.82 and Peri George from Villa Duchesne at 59.30.

The 50 Free Prelim proved to be one of the more dramatic events of the Class 1 Championship, as the clear favorite in the event, Summit Prep’s Molly Moore, was disqualified for a flinch on the block during the preliminary session.  That led to a swim-off for 8th place between Mary Bean from Webb City and Sarah Nelson from St Dominic’s, with Bean winning the showdown for the spot in the A-Final.  Moore went on to establish the Class 1 Record of 23.19 on the lead-off leg of Summit Prep’s preliminary 200 Freestyle Relay, and also claimed the 100 Backstroke finals with 54.77. The backstroke was rounded out by Parker Hagemann from Webster Groves with 59.03, and Tiny Martucci from Thomas Jefferson at 59.78.

Other top 3 finishers include:

MSHSAA Class 2 Championship Finals are this Saturday, February 17th, with Diving beginning at 9am and Swimming events starting at 3pm in St. Peters.