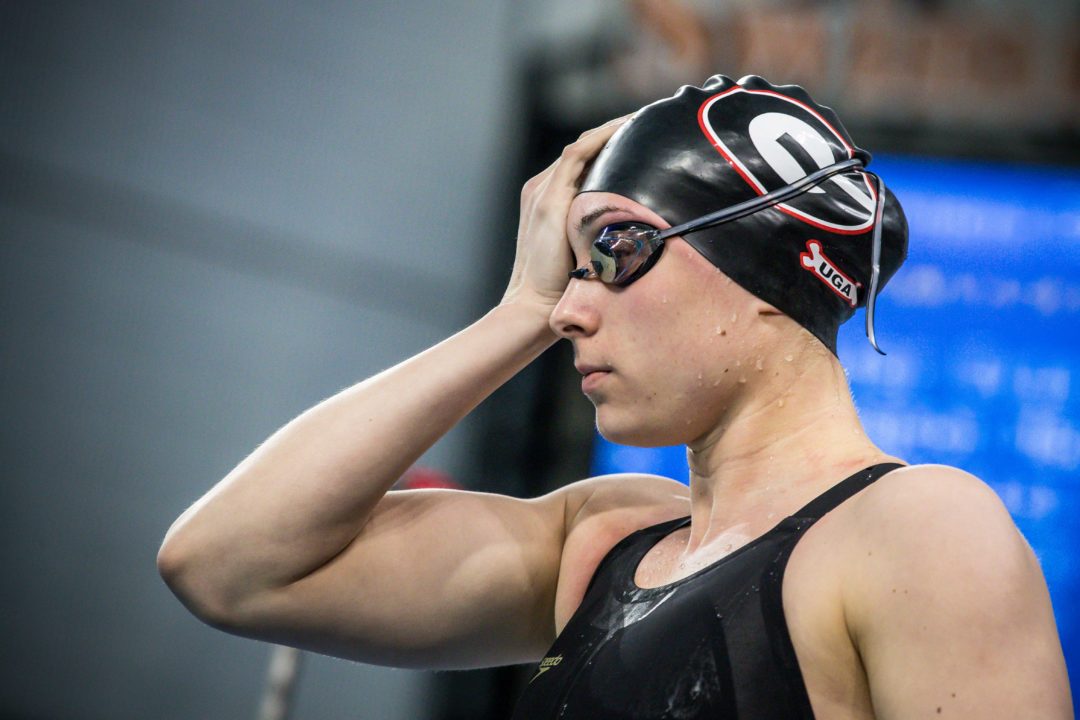 UGA seniors Jack Dalmolin and Courtney Harnish have been named the conference's Men's and Women's Swimmers of the Week. Archive photo via Jack Spitser/Spitser Photography

Men’s Diver of the Week: Leonardo Garcia, Florida
Florida’s Leonardo Garcia, a junior from Cali, Columbia, won the 3-meter springboard versus Miami and FIU with a personal-best score of 416.10. Garcia was runner-up on the platform with a final score of 336.10.

Men’s Freshman of the Week: Jake Magahey, Georgia
Georgia’s Jake Magahey, a freshman from Dacula, Ga., recorded three individual victories against South Carolina. In the 50 freestyle, Magahey tied for the win with a personal-best time of 20.53, followed by a winning time of 1:36.88 in the 200 freestyle. In the 500 freestyle, he earned his third win with a time of 4:27.09. In the 400 freestyle relay, he posted a split of 44.77 on the second leg of the exhibition performance, helping the Bulldogs notch the fastest-overall time of 2:59.74.

Women’s Swimmer of the Week: Courtney Harnish, Georgia
Georgia’s Courtney Harnish, a senior from York, Pa., earned three individual wins in the home finale win over South Carolina. In her first 100 freestyle performance of the season, Harnish took first with a B-cut time of 49.45. She also made her season debut in the 100 backstroke, placing first with a time of 54.33, before closing the meet with a winning B-cut time of 53.33 in the 100 butterfly. In the opening 200 medley relay, Harnish swam a split of 24.08, the fastest butterfly leg of any swimmer.

Women’s Diver of the Week: Brooke Schultz, Arkansas
Arkansas’ Brooke Schultz, a junior from Fayetteville, Ark., swept the springboard events in the 171-63 Arkansas win over Drury. Schultz won the one-meter dive with a final score of 351.15. She also racked up a win in the three-meter dive, with a score of 367.28.

Women’s Freshman of the Week: Mona McSharry, Tennessee
Tennessee’s Mona McSharry, a freshman from Dublin, Ireland, won two individual events against No. 10 Kentucky while helping the Lady Vols to a first-place finish in the 400 freestyle relay. McSharry was also a part of UT’s second place 200 medley relay. In the 100 breaststroke, McSharry won the event and broke the meet record with a time of 59.91, besting the old meet record set by Olympian and Tennessee alumna Molly Hannis. She also touched the wall first in the 200 breaststroke with a time of 2:12.27.