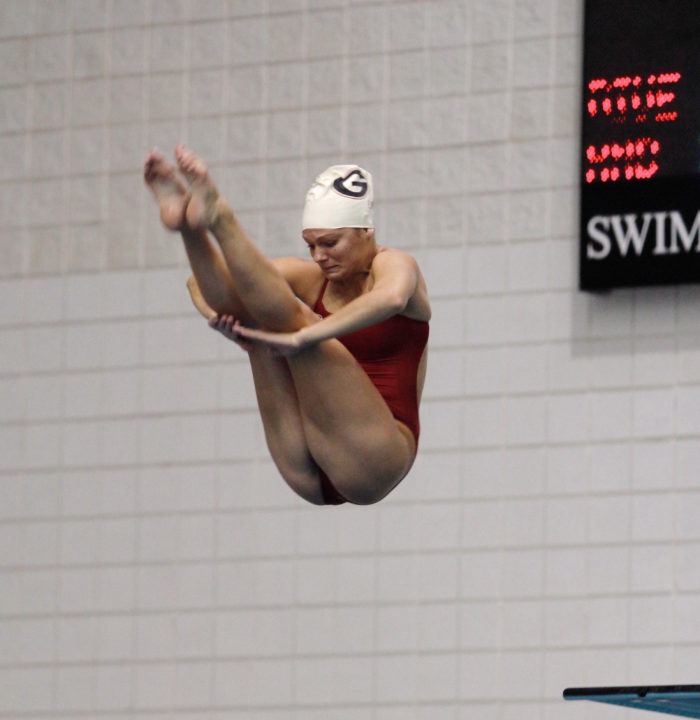 Three divers, two Georgian and one Floridian, sign with the University of Georgia's Class of 2022. Current photo via Shanda Crowe, shandacrowe.weebly.com

In addition to Addison Kelly’s verbal commitment, which was previously reported, the University of Georgia Bulldogs have added another three divers to their Class of 2022.

The first diver is Hudson Coldren, who is Georgia’s only male diving signee of the Class of 2022, as well as the only diving signee not from the State of Georgia. Coldren hails from Fort Lauderdale, Florida, and attends Cardinal Gibbons High School. At the club level, Coldren competes for Pine Crest. Coldren currently stands at 5’11” tall, which is relatively tall by diving standards, as is his future training partner, current sophomore Charlie Clifton (6’1″). Coldren is a USA Junior National Championships qualifier, and competed at the 2016 and 2017 USA Diving National Zone B Championships. The Bulldogs announced Coldren’s signing via their Instagram account:

The second signee is Kelliann Howell from Moultrie, Georgia. Howell competes for Moss Farms Diving and and Colquitt County High School. At Moss Farms, she is coached by Chris Heaton, and at Colquitt High, her coach is Amy Hardigree. Howell is the 2016 6A Georgia State Champion in the 1-meter springboard. In 2017, she competed at the USA Diving National Championships after qualifying from Zone B. The Bulldogs announced Howell’s signing via their Instagram account:

The final signee is Ellie Crump from Dunwoody, Georgia. Her club team is the Atlanta Diving Association, which is the same club where Stanford freshman diver Abby Gardner trained. Crump is an All-American for The Marist School, and is the two-time runner-up in the 1-meter springboard at GHSA 1-5A State Championships. Now that four-time 1-meter champion Gardner has left for Stanford, Crump looks to capture the state title in her final high school season.

She is also talented on the 3-meter springboard, having scored 411.20 in the event at the 2017 USA Diving Junior Region 2 Championships. The Bulldogs announced Crump’s signing via their Instagram account: