Georgia blows out Florida at home, taking 23 of 32 events 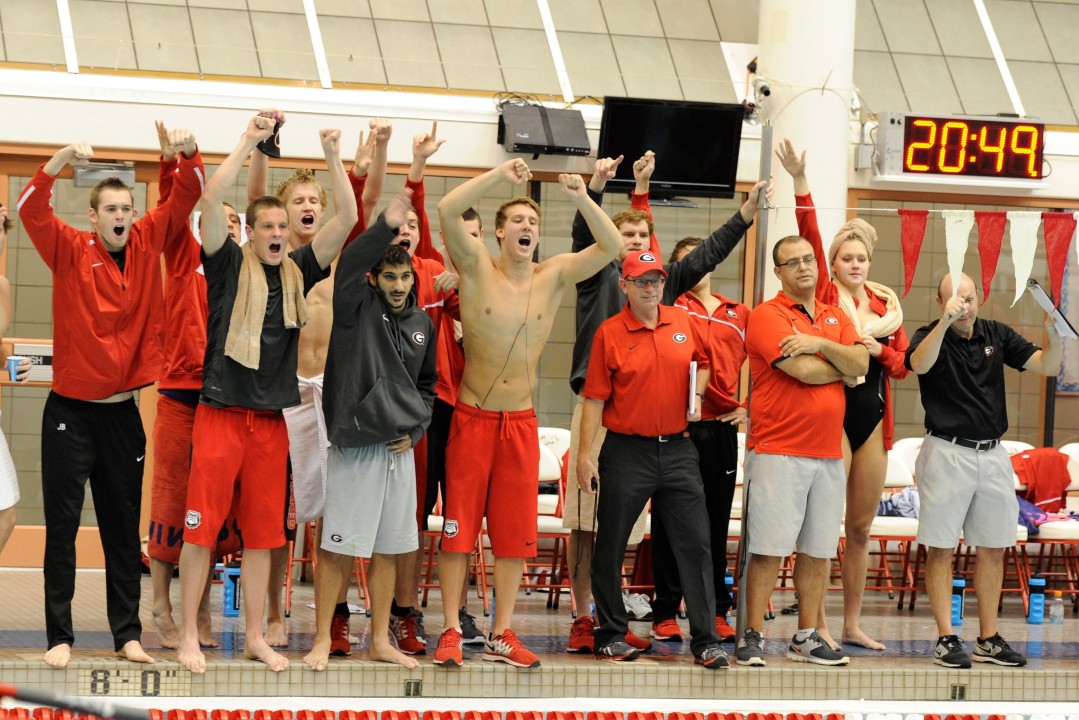 Among the most damaging stats: Georgia put together 1-2-3 sweeps in 3 different events and went 1-2 in both of the women's relays. Current photo via John Kelley and Georgia Swimming & Diving 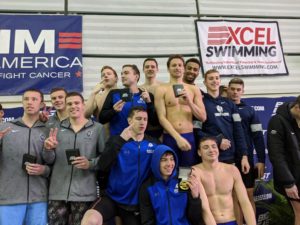 The Georgia Bulldogs ran roughshod over SEC opponents Florida on Friday afternoon, combining for 23 event wins between men and women. Among the most damaging stats: Georgia put together 1-2-3 sweeps in 3 different events and went 1-2 in both of the women’s relays.

The Georgia women dominated enough to exhibition their final two events, including a 400 free relay where they put up the two fastest times.

You could tell the visiting Gators were in for a long day from the first event, when Georgia split its medley relays and nabbed the top two spots by a half-second margin. All Georgia really had to do was flip its two breaststrokers, sending Annie Zhu to the B and bumping Emily Cameron up to the A. Though Florida’s Lindsey McKnight actually outsplit both (McKnight was 28.26 for Florida to Zhu’s 28.80 and Cameron’s 29.04), the butterflyers easily made up the difference.

Freshman Kylie Stewart split 23.83 on the A while Lauren Harrington was 24.22 on the B. The duo combined to make Florida pay for using fly/free specialist Natalie Hinds on freestyle, outsplitting the Florida squad by well over a second on fly. Hinds wasn’t able to make up more than a tenth on the anchor leg and Georgia jumped to an early 15-2 lead in the points. The A relay was 1:40.90 and the B 1:40.97. 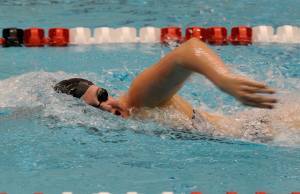 But the Bulldogs did most of their damage in backstroke and breaststroke. Kylie Stewart and Annie Zhu won the 100s of each stroke back-to-back early in the meet, with Stewart going 53.42 in the back and Zhu 1:02.98 in a 1-2 breaststroke finish. (Behind her, Emily Cameron beat Florida’s Lindsey McKnight by just .05).

McKnight would also come back to win the 200 IM. Even though the meet was out of hand and Georgia was exhibitioning its swimmers, McKnight still fought hard, going 2:01.43 and winning a very tight race with Georgia’s Cameron.

Though the event was exhibitioned, Georgia capped off its dominance with a 1-2 finish in the 400 free relay, meaning the ‘Dawgs swept both relay races. Chantal van Landeghem was 51.60 leading off one relay, with first-year Meaghan Raab going 51.68 on the front of the other team. Van Landeghem’s relay got a 51.29 from Maddie Locus, plus a 51.45 from freshman Kylie Stewart and went on to win in 3:26.41.

Exhibitions and all, Georgia topped Florida by a crushing margin of 176-119, and these Bulldogs certainly look like they’ll be in the hunt for a third-straight NCAA title come the post-season.

The men, coming off a painful loss to NC State on the road a few weeks ago, were actually more dominating than the women, taking 12 total events and going 1-2-3 in a pair of them.

Maybe most impressive was the 200 fly, traditionally a dominant event for the Gators. But Georgia went 1-2-3 in the event to assert their dominance, led by versatile junior Chase Kalisz‘s 1:45.64. Kalisz was followed by freshman Mick Litherland (1:47.15) and sophomore Pace Clark (1:47.20). All three beat one of Florida’s top swimmers, Dan Wallace, who won a gold medal for Scotland at the Commonwealth Games over the summer.

That was the first of two wins for Kalisz. The sophomore beat out the 200 IM field late in the meet, going 1:47.13 and leading a 1-2 punch with rising star Gunnar Bentz.

The other big hitter for Georgia on Friday was junior Tynan Stewart, one of the veteran leaders on a fairly young squad. Stewart went off late in the meet, with both his wins coming after the first diving break. He led Georgia’s other 1-2-3 finish in the 200 back, going 1:45.17 with Jay Litherland and Jared Markham coming in behind. Then Stewart came back to crush the 100 fly in 47.91, yet another 1-2 finish for Georgia.

As with the women’s meet, Florida was at its best in the sprints, which is a bit of an identity shift for a program known for yardage and endurance. Freshman Caeleb Dressel won the 50 and 100 frees, which were matchups of Florida’s biggest freshman talent with Georgia’s most glaring weakness. Dressel was 20.06 to win, but in an encouraging sign for Georgia, Michael Trice was a season-best 20.16 for second place. The Bulldogs still aren’t deep enough in the sprints to put together truly threatening relays, but if they can get a guy under 20 seconds mid-season, they could at least be formidable in the individual 50 this year.

Dressel came back to win the 100 free in 44.35, topping Georgia’s Matias Koski by a tenth. Koski, typically known as a distance man, stepped down in yardage to try to fill Georgia’s weakness in the sprints, and filled in admirably. He also swam the 200 free, going 1:36.78 to nip Florida’s Pawel Werner (1:36.93).

Even with Koski leaving the 1000 free, Georgia was still fine in the distance race. Freshman Kevin Litherland picked up the slack, winning his own close race with Florida’s Mitch D’Arrigo 9:05.26 to 9:05.91. 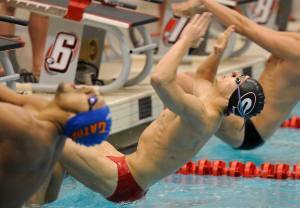 Taylor Dale led off the winning medley relay and also won the 100 back. Photo courtesy of John Kelley and Georgia Swimming & Diving.

Georgia won both relays with ease. In the 200 medley, each Bulldog put up the field’s fastest split in his own stroke to help the team blast a NCAA-leading 1:27.08. That team was Taylor Dale (22.01), Nic Fink (24.19), Pace Clark (21.26) and Michael Trice (19.62), with all four splits boding very well for the rest of the season. Trice’s 19.6, especially, suggests the team might have just enough sprint speed to get by in its weakest discipline.

All that added up to a 174.5-122.5 win for Bulldogs, who seem to be kicking it into another gear after dropping that road contest to NC State earlier this month.

Georgia is back in action next Friday against Georgia Tech and the Savannah College of Art and Design (SCAD) on the road. Florida, meanwhile, returns home to host the Minnesota Gophers next Saturday.

Florida is probably dead after a long month of hardddd training. This result doesn’t surprise me.

I knew the rumors would fly about a ‘rest’ for the Dawgs. Nope completely false. They were just as beat up and rundown as the Gators…..except the Dawgs wanted it more.

Gator fans just jealous 😉 No rest buddy… Dawg domination totally!!! Can you say fave once again for the national title on the women’s side? 🙂

It looks like UF women are pretty thin…i don’t care who was rested/beat up….they will have trouble being top 10 at NCAA’s….they need that German gal now.
UGA women will be tough to beat this year….especially when you look at the performances of Cal and Stanford this week vs Texas.

The UF women still have Ashlee Linn & Georgia Hohmann that didn’t compete as well as the German girl being eligible in January, they will still be a top 10 team without a doubt. Credit to UGA getting the job done today but UF women will still be contenders at the end of the year especially with several January signings

Stanford will be there in the finals for sure. They have enough talent in their freshmen for a shot at 2nd I’m thinking. Cal looks like they are on a down swing might have to settle for 4th. Or lower… No one will seriously challenge Georgia’s depth tho!

UF has one of the women’s team members injured who would normally contribute in relays along w backstroke events. Gators will be just fine come SEC and NCAA. Medley relays will be very competitive this year. SEC is strong this year and the Gators will be in the top five (5) this year.

Can UF women beat UGA, TAMU, or TENN (see today’s results vs IU) at SEC’s? They might be 4th in the SEC alone.
I do think their men will be good come conference….not so sure of the women. They only swam 2 girls in the 200 free and 100 free?!? crazy

Thats because they have 5 girls who are weren’t there… 3 of them being 200 freestylers. It will be tough with TA&M but easy to sweep Tennessee. UF girls will be vastly improved with a little more depth at the end of the year. They need more credit for the talent they have. The SEC is great!

Where was O Smoliga?