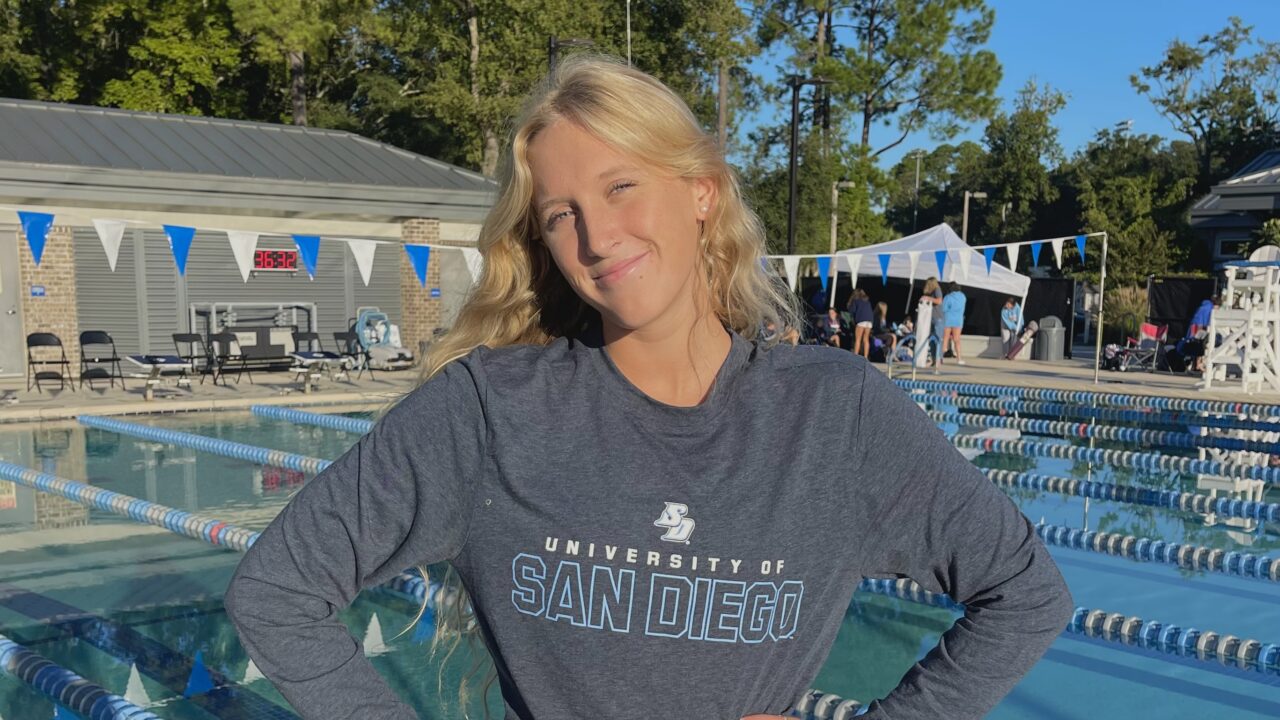 Skylar Bruner from Hilton Head Island, SC, has announced her verbal commitment to compete at the NCAA Division I level for the University of San Diego. Current photo via Skylar Bruner

Skylar Bruner from Hilton Head Island, South Carolina, has announced her verbal commitment to compete at the NCAA Division I level for the University of San Diego for 2023.

“l’ve never been more excited to announce my commitment to swim and study at the University of San Diego in California! Huge thank you to my brother, parents, coaches, teammates, teachers, and friends for being with me every step of the way from east coast to west coast! I can’t wait for this next step and I’m so happy it’s with USD’s swim and dive team and coaching staff! GO TOREROS!!”

Bruner is a senior at Hilton Head High School and represented the school at the 2022 SCHSL 4A State Championship earlier this month. At the meet, she finished 2nd in the 500 freestyle (5:06.13) and 3rd in the 100 backstroke (59.23). In addition, Bruner also competes for Hilton Head Aquatics, where she is the reigning South Carolina Senior State Champion in the long course 1500 freestyle (17:44.02). Bruner currently holds Futures cuts across the 500, 1000, and 1650 freestyle, along with the 100 backstroke.

When she arrives across the country  next fall, Bruner will bring some much-needed distance freestyle depth to San Diego’s roster. Her best time in the 500 freestyle would have led San Diego’s roster by almost 7 seconds during the 2021-2022 and would lead the roster by 8 seconds this season. In addition, her best 1650 freestyle would have been the fastest on the roster by a whopping 50 seconds last season, with no times logged in that event yet this season. With the 1000 freestyle often not offered at the NCAA D1 level, Bruner still has 2 strong event options for her third individual event in the 200 freestyle and 100 backstroke, both events she would lead the roster in this season.

At the conference level, Bruner will also provide a significant boost for the San Diego women. Her best time in the 1650 freestyle would have placed 6th at the 2022 MPSF Championships to score 13 points. In addition, she would have made the C-finals of the 200 freestyle and 500 freestyle, just coming in out of scoring range in both events. San Diego’s top scorers at that meet were Abby Muaddi and Jane Riehs, who each contributed 13 points. As a high school senior, Bruner is already in the position to match, and potentially exceed, that number.

With her commitment, Bruner is set to join Andie Daignault, Milan Bever, Gwendolyn Smith, and Holly Tarantino in San Diego’s class of 2027. The class boasts several strong backstrokers, as almost every commit would have been near the top of the roster in both the 100 and 200 backstroke events.

That Bruner talent runs deep in the distance events. Glad to see the next generation representing.

Is she the granddaughter of the great Mike Bruner?? That’s awesome!