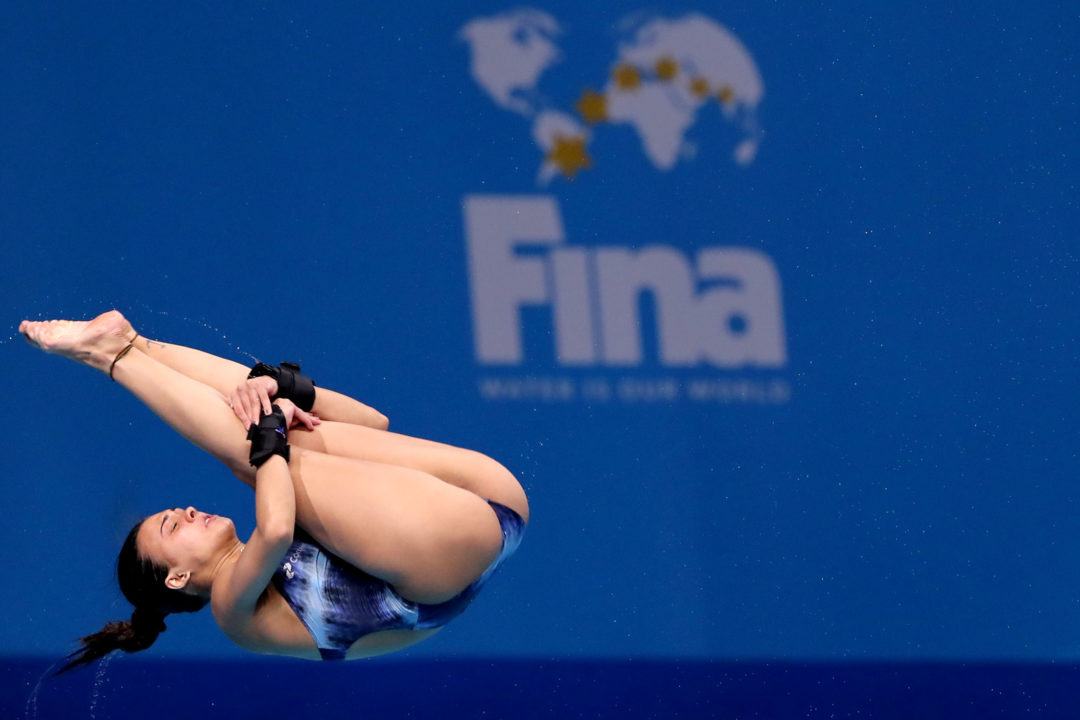 Tom Daley won gold in the men’s 10m platform to close out diving at the FINA World Championships.

Day 5 of diving at the Danube Arena in Budapest started off with prelims and semis of the women’s 10m platform. The Chinese have been dominant thus far in diving, and the trend continued today.

After sitting 3rd after prelims, China’s Si Yajie qualified 1st overall for the final with a score of 382.80 in the semis. The 18-year-old won the world title in this event at the 2013 championships in Barcelona and also took silver in Rio. She already has a gold here in Budapest from the 10m platform synchro event.

Her teammate Ren Qian qualified 2nd overall with a score of 367.50 after posting the leading score of 376.65 in the prelims. Ren is the Olympic gold medalist in this event, and already has two golds here in Budapest. She won the 10m synchro event with Si, and was also on the winning mixed 10m synchro team with Lian Junjie.

The day closed with finals of the mixed 3m & 10m events, and it was the French who came out on top.

Matthieu Rosset and Laura Marino combined for 406.40 points, winning France’s first diving title of the championships. The two won the European title recently, and were 5th in Kazan.

Mexicans Rommel Pacheco and Viviana Del Angel Peniche, who held the lead heading into the final round, won silver with a score of 402.35. Pacheco, a veteran who won his first international medals at the 2003 Pan American Games, had a pair of 3m dives that scored over 90 points to put the team into the lead late before France came out on top.

Americans David Dinsmore and Krysta Palmer solidified the bronze medal with a score of 395.90, well ahead of the Germans who took 4th with 379.55.

Wow, it’s so interesting that France wins a diving event. but still can’t win in the pool.

Why are you bullying ppl who have not even begun their events?

Ellie, it’s so interesting that USA wins in the pool but still can’t win in diving or open water. 😉

No offend here, just find it a little amazing.?BTW I’m not from the US.
?Our country hasn’t won a single medal by now, if that makes everyone here feel better.

Jessica Parratto is the daughter of Mike Parratto, who was previously Jenny Thompson’s coach and is now Regan Smith’s coach.