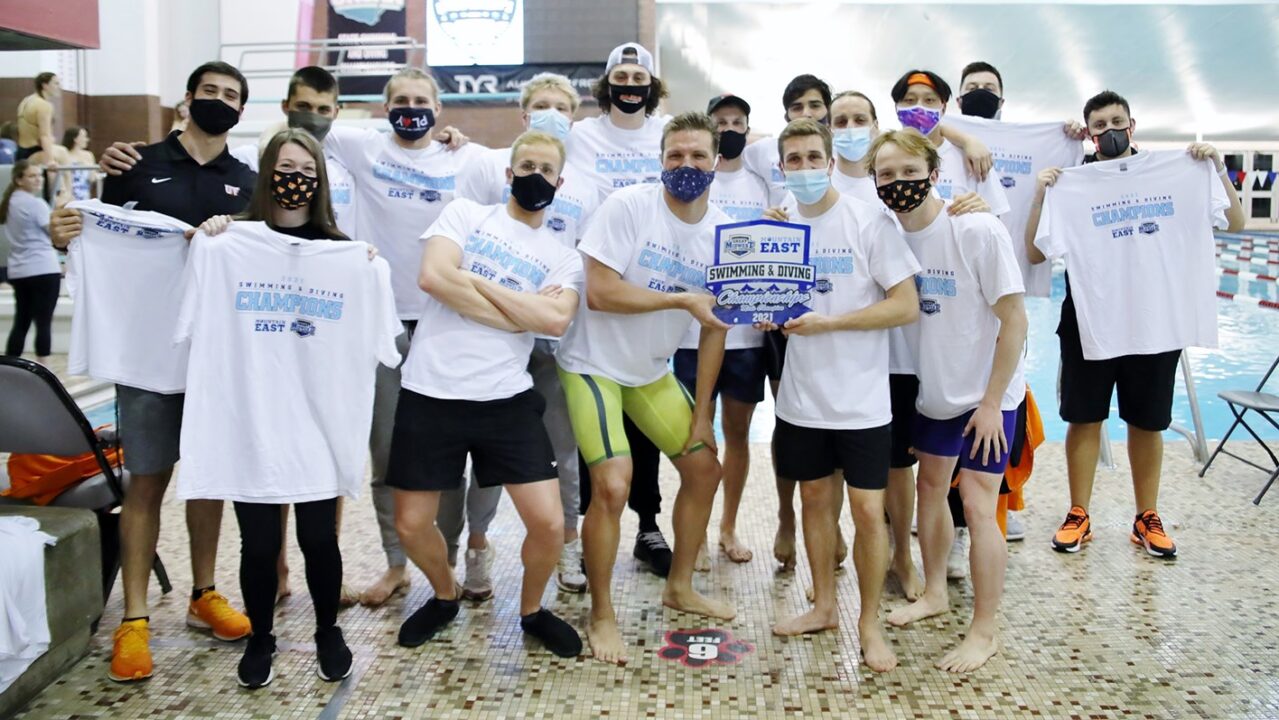 The Huskies were headlined by Andy Thomas who broke a trio of records and helped BU earn every relay victory in the meet.

The University of Southern Indiana will furnish men’s and women’s swimming and diving teams beginning in the fall of 2022. They will compete in the GLVC.

CANTON, Ohio – The term dynasty is applicable to the University of Findlay men’s program as the Oilers officially captured their fourth consecutive title in the Great Midwest Athletic Conference/Mountain East Conference Championships on Friday.

Findlay won by basically 500 points over runner-up Notre Dame (OH) as the Oilers continued to expand their lead each day of competition. The Oilers have worked hard for team championship victories in 2018, 2019, 2020 and now, 2021.

Appropriately, it was a sweep for the Oilers with multiple individual awards specifically tailored for the meet based on their respective performances.

Since the event’s inception with the collaborative effort from the Mountain East in 2018, Findlay has been on top. Stollings was responsible for a share of the meet-best 128 points including championship wins in the 50 freestyle, 100 butterfly, 100 backstroke and 200 butterfly, while contributing to team victories in the 200/400 medley relays and the 400 freestyle relay to end Friday night.

It was a dominant display in the water for the 2021 NCAA Champion, who was billed both swimmer and freshman of the meet in 2020. He set a total of four different meet records in this year’s championship format.

Garcia also accounted for 128 points, everything virtually touching for gold as he blazed his way to wins in the 200 IM, 400 IM, 100 breaststroke and 200 breaststroke. Garcia completely re-wrote the combined conference records in the 100 and 200 breaststroke races and 200 IM. He also helped win the 400 freestyle relay in another record-setting time of 3:01.00 to conclude tonight’s session.

Shevlin was the conference champion in both the 1-meter and 3-meter diving events while accounting for 64 points. Both of his efforts resulted in top 10 placement in conference history from those distances. Makepeace saw his group set multiple overall and meet records in Canton. Paul Pavala won his third consecutive 200 backstroke title while he and Dags Bregis, Adam Hornak, Jared Toaz and Luca Chiandussi, virtually scored over 100 points each.

Meet host Malone would finish third in the team scoring behind Notre Dame (OH) by a very slight margin. The Pioneers collected 938.5 points and fended off Fairmont State, which had 926.

Each conference will announce seasonal awards in the same categories on varying timelines to celebrate the conclusion of the 2020-21 season. The NCAA Championships have already been conducted in Birmingham, Ala.

The Chargers were able to keep their distance from runner-up Findlay with an edge of 1690.5 points to 1,464 points. Malone was fourth with 721.5 points and Ursuline tallied 177 in a 10-team field.

Hillsdale was also rewarded by the coaches for a pair of individual meet awards including G-MAC/MEC Freshman of the Meet Cecilia Guadalupi and G-MAC/MEC Coach of the Meet Kurt Kirner.

Guadalupi swept the 200 and 400 IM conference titles while finishing runner-up in the 100 breaststroke and 200 breaststroke. She helped secure a 200 freestyle relay victory and second-place points in the 800 freestyle and 400 medley relays.

Guadalupi accounted for 120 of Hillsdale’s team points. She had plenty of help as the Chargers were again very successful in advancing multiple swimmers past the prelims and into the finals where guaranteed points awaited.

Kirner guided his program to a second straight team title and capped it with a celebratory splash in the pool.

Findlay’s charge during the event was paced by Ashton Klopp and Sarah Miles, who each tallied 105 points for the Oilers. Leah Vander Roest was named the G-MAC/MEC Diver of the Meet while winning the 3-meter competition.

UNC Pembroke NCAA qualifier Gillian Manning was voted as the G-MAC/MEC Swimmer of the Meet as the Braves finished second in the team race. Manning won the 500 freestyle, 200 freestyle, 200 butterfly and contributed to a pair of relay race wins as well.

Each conference will announce seasonal awards in the same categories on varying timelines to celebrate the conclusion of the 2020-21 season. The NCAA Championships have already been conducted in Birmingham, Ala.