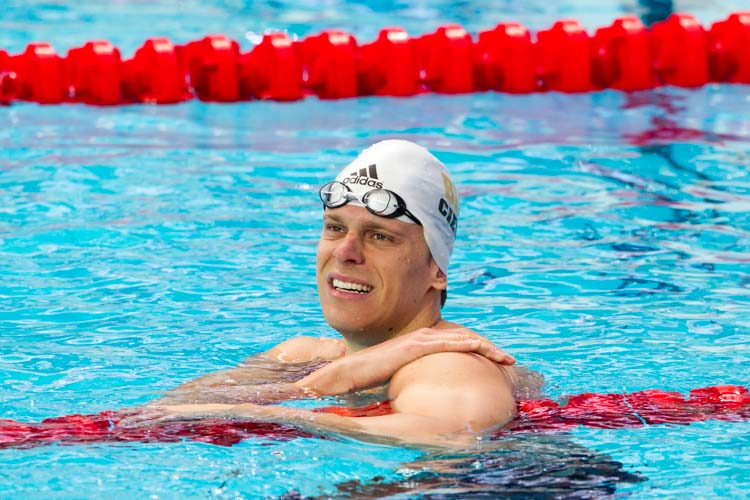 With Cesar Cielo leaving the FINA World Championships prematurely due to injury, the door is wide open for a number of swimmers to capitalize on his absence from the 50 free. Current photo via Tim Binning/TheSwimPictures.com

Day 6 of the FINA World Championships will begin with the Men’s splash and dash, and this may prove to be one of the most intriguing events of the morning with defending World Champion Cesar Cielo out of the picture. Having left the Championships prematurely due to a shoulder ailment, this leaves the door wide open for heavyweights Florent Manaudou out of France and Vladimir Morozov out of Russia amongst several other competitors. USA veteran Anthony Ervin comes into the event with the second fastest seed time and he has never been afraid to take out his morning swims extremely quickly.

The women’s 50 fly is Sarah Sjostrom‘s to lose, and it is very difficult to imagine anyone else topping this event tomorrow evening in finals. As the World Record holder and the only woman to ever break 25 seconds in this event (and by over a half-second at that), it shouldn’t be surprising if Sjostrom posts a time this morning that could win the final outright. Her closest competitors will come in the form of Denmark’s Jeanette Ottesen and Great Britain’s Fran Halsall, though Ottesen was nearly a full second-and-a-half behind Sjostrom in the 100 Fly on the second night of competition.

After a self-proclaimed “disappointing” 200 fly, Chad Le Clos will be the one to look out for in the Men’s 100 fly this morning. It will be far from easy for the South African, as American Tom Shields, Poland’s Konrad Czerniak, and Hungary’s Laszlo Czeh are just a few of many other talented swimmers vying for a middle lane in the semifinal heats. Cseh deserves a special mention given how good he has already been this week, and he can take some confidence from his surprising defeat of Le Clos in the 200 fly just two nights ago. A dark horse in the race is Denmark’s Viktor Bromer who was especially good in the 200 fly, though the longer distance caters to his endurace particularly well.

Missy Franklin of the United States will finally receive an opportunity to race in her arguably best event, the 200 backstroke, though she will need to do much better than she did in the 100 backstroke if she wants to retain her top seed. She will be right next to Australia’s Emily Seebohm, and though Seebohm is certainly better in the shorter distances, the ability of her fellow countryman Mitch Larkin to perform extraordinarily well in both the 100 and 200 may serve as some inspiration for her. We will also see Hungary’s Katinka Hosszu race again after not swimming yesterday at all.

The men will take their turn at the 4×200 freestyle relay this morning as well, and following the conclusion of that, Katie Ledecky will highlight the field in the Women’s 800 free to finish off the action for the morning.

France’s Florent Manaudou led all competitors this morning with a 21.71. Though this was largely expected, Nathan Adrian was nearly equally as impressive with a 21.73 out of the second circle-seeded heat to nab a middle lane tonight a well.

Greece’s Kristian Gkolomeev and Russia’s Vladimir Morozov were the only other athletes to dip under 22 seconds this morning with times of 21.87 and 22.01 respectively. Morozov will surely be looking to bounce back in the subsequent rounds after being disqualified from the 100 free earlier this week.

Though he had a relatively disappointing swim, Anthony Ervin still managed to secure a second swim with a 15th-placed 22.44.

To no one’s general surprise, Sweden’s Sarah Sjostrom paced the field this morning with a 25.43 out of the final heat. She looked very controlled throughout the race and only had to fend off the Netherlands’ Inge Dekker who finished just behind in a 25.66. Sjostrom will almost certainly get faster as the rounds progress, so it’s a good sign that she is still on top of the field without putting forth much effort this morning.

Denmark’s Jeanette Ottesen looked very powerful this morning en route to winning her heat with a 25.51. The Dane is doing a very good job of swimming her own race despite how impressive Sarah Sjostrom has been this week. Known to be a great racer, Ottesen will surely be very quick in the semifinals heats as well.

Great Britain’s Fran Halsall also dipped under 26 seconds with a 25.86 to win Heat 6, and she should not be taken lightly in the subsequent rounds. Having a best of 25.20, it is very likely she has a lot left in the tank for tonight’s race.

Kendyl Stewart out of the United States also got the job done this morning with a 26.07 to tie for 7th in prelims. This is just off her incoming time of 25.99, but she is in great position for semis this evening. The other American, Claire Donahue, finished 17th and will miss the semi-finals.

Laszlo Cseh blitzed the field this morning with a new Hungarian national record of 50.91. Cseh smashed his previous best of 51.45 from the World Championships two years ago in Barcelona, and he continues to impress every time he jumps into the pool this week.

One of the big surprises this morning came from China’s Li Zhuzao broke the World Junior Record with a 51.54. This clipped 0.37 seconds off his own record from last year’s Asian Games, and he will have a great lane tonight in the semifinals.

American swimmers Tom Shields (51.09, 2nd), and Tim Phillips (51.90, 10th) both secured second swims with their efforts this morning and will look to move up tonight. Shields’ swim was actually a best time, and he is very close to becoming the only American outside of Michael Phelps, Ian Crocker, and Tyler McGill to dip under 51 seconds in this event.

South Africa’s Chad Le Clos took 8th this morning with a 51.83, but he typically tends to get faster as the rounds progress.

Hungary’s Katinka Hosszu looked very smooth with a 2:07.17 this morning to pace the morning heats. Hosszu has rapidly been improving in the backstroke in recent years, and she will make a serious case for an event title if she shows a progression from prelims to finals similar to that of her previous swims.

Though Missy Franklin has not been at her best this week, she still cruised to a 2:07.84 for 2nd place overall. She looked cheerful as always following her race, and given that this is her best overall event, she will likely be controlled once more tonight and do just enough to win her heat.

Elizabeth Beisel of the United States also posted a top 8 time this morning with a 2:09.54, and though that is far off her personal best of 2:06.18 from the London Olympic Games, she did show some great closing speed at the end of her race. She was actually .05 seconds faster on her last 50 than Franklin was, and a good swim from her tonight would serve as a great catalyst for the Americans as a whole in finals.

The foursome of Grant Hackett, Kurt Herzog, Daniel Smith, and Thomas Fraser-Holmes paced the morning heats with a 7:08.40. They were especially good on the back half of the relay with Smith and Fraser-Holmes posting 1:46’s to take down the then-leading United States relay out of Lane 7. Smith’s split of 1:46.02 was the fastest split of the morning amongst all competitors.

The United States posted a 7:08.55 to take second this morning, though they showed some great racing ability even without Ryan Lochte on the prelims relay. Michael Weiss provided a key 1:46.14 second leg that temporarily launched the USA team out in front in Heat 2, but the second half of Australia’s relay reeled Michael Klueh and Conor Dwyer in to just slip into the wall ahead of the Americans.

Also in the picture are the British who managed a 7:09.00 this morning without the help of 200 free individual event winner James Guy. Florida Gator alum Daniel Wallace provided a key 1:46.03 split on the third leg of the relay that briefly propelled Team GBR to the lead in Heat 2, but they would relinquish it soon after. The British should be extremely competitive tonight with the addition of their ace middle distance swimmer for their finals roster.

The Netherlands’ Sebastian Verschuren completed an incredible comeback to take down Japan, Russia, and Italy in the final heat with a 1:46.38 split of his own.

Katie Ledecky did not chase the World Record this morning, but she still comfortably led all competitors this morning with a 8:19.42. We alreay know that she has a considerable amount of speed left in the tank considering that she was an 8:13.25 to her feet in the first 800 of her World Record-setting 1500 on the third night of competition, so a smooth heat win this morning is an encouraging sign for the United States’ distance star.

Australia’s Jessica Ashwood posted the second fastest time of the morning with a 8:22.17 out of Heat 4, and she was only a second off her seeded time of 8:21.33. She was very good on the first night of competition when she set a new Oceania record in the 400 free, so it should be expected of her to make another record-breaking push tonight.

Denmark’s Lotte Friis was also fairly comfortable this morning with a 8:23.12, and it is very likely that she gauged her performance off Ledecky from just one lane over. Friis will be fortunate enough to swim next to Ledecky again tonight, so there is no doubt that she will get some good pacing in the finals session.

Just missing a second swim was Becca Mann of the United States with a 8:28.44 at 10th place.

So Youngquist goes all the way to Kazan and not get to swim? Yikes.

Is there some mixed relay they can throw him into?

It is a shame Santo isn’t in the 50 free. May be his best event.

Generally the men’s meet hasn’t been too exciting… because of all the absences. Wish Manadou and Morozov were in the 100, but hopefully they make the 50 spicy.

Mexico is my darkhorse pick in the 4×2. I hear they were throwing down some huge times heading into this meet.