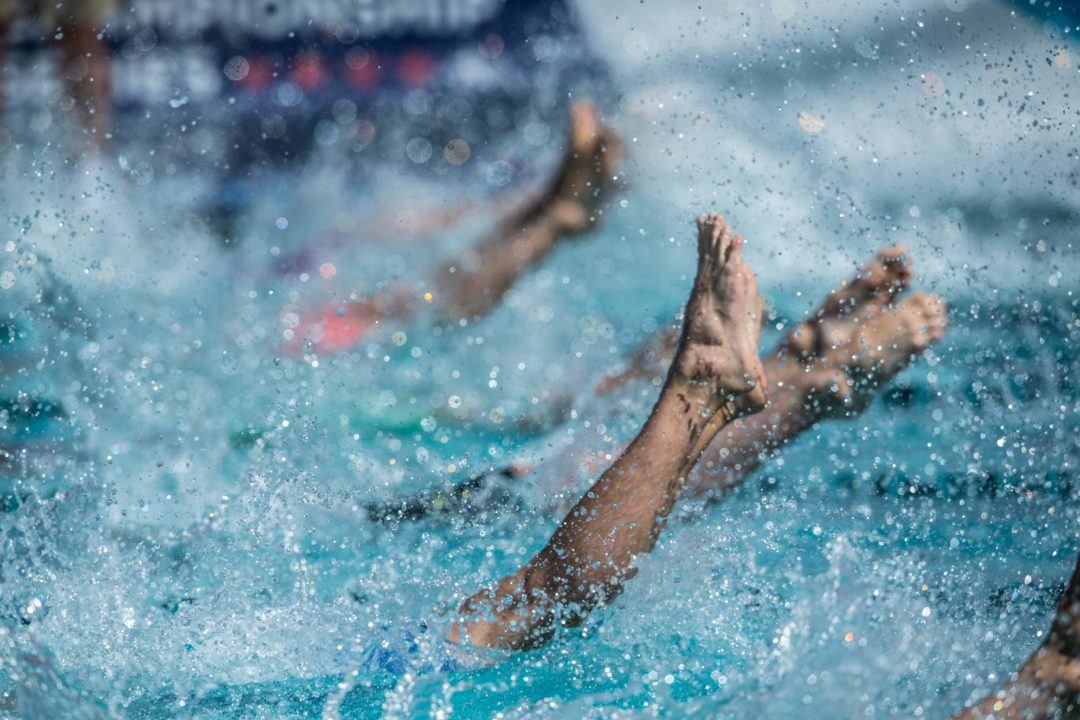 A clarified rule interpretation by FINA could bring serious consequences for athletes and organizing bodies of the Energy For Swim 2018 meet. Meet organizers say the interpretation is FINA's attempt to "destroy" the meet in an attack on the International Swimming League (ISL). Stock photo via Mike Lewis/Ola Vista Photography

A clarified rule interpretation by FINA could bring serious consequences for athletes and organizing bodies of the Energy For Swim 2018 meet. Meet organizers say the interpretation is FINA’s attempt to “destroy” the meet in an attack on the International Swimming League (ISL).

The rule interpretation would essentially reclassify the Energy For Swim 2018 meet as an international-level competition that would need further FINA approval, without the time to obtain the approval before the meet happens. Sources tell SwimSwam the conflict could lead to sanctions on the meet hosts and on athletes who participate in the Energy for Swim event – even potentially disqualification from future World Championships or Olympic Games.

“They decided to destroy this event,” said Dmitriy Kachurovskiy, former president of the Ukrainian swimming federation and current ISL official. “That event – that many elite athletes from all over the world want to participate in – has become more and more popular, and I think they try to destroy it because they are afraid of it.”

Documents obtained by SwimSwam show that FINA (the international federation governing aquatics) contacted FINA Bureau members to “request advice” as to an interpretation of the organization’s bylaws. The interpretation specifically targets whether meets are classified as “international” or “national.” Organizers of international competitions have to seek FINA approval at least six months before the start of the meet, while national competitions do not.

The ISL had originally planned a December competition that would emphasize fan entertainment, team-based competition and generous athlete compensation. But Dmitriy Kachurovskiy, former president of the Ukrainian swimming federation and current ISL official, says FINA made clear that it did not recognize the ISL, even going as far as to contact all national federations to announce it wouldn’t recognize an ISL-organized meet and that athletes who participated in such an event could face disqualification.

The December competition was eventually reformed into what was clearly labeled in meet invites as a “national competition where national and foreign swimmers will participate on individual basis not representing member federations, in respect of LEN and FINA rules.” The Italian swimming federation (FIN) would host the event, which is funded by the Energy Standard Group. The ISL isn’t technically connected to the Energy for Swim 2018 meet, though the ISL, Energy Standard Group and Energy for Swim event all have the same organizer: ISL Advisory Board Head Konstantin Grigorishin.

But when FINA contacted its Bureau, the rule interpretation specifically noted that “a competition which is conceptually designed to have a majority of foreign participants… is not a national competition.” That interpretation would count the Energy for Swim 2018 meet as an international competition, effectively legislating the meet out of existence because the six-month window to get FINA approval has long since passed.

Kachurovskiy said the move was an attempt to “destroy” the format of the ISL.

We asked FINA for comment, but have not yet received a response.

It’s unclear what the consequences would be for involved parties if the meet doesn’t ultimately get FINA approval. Kachurovskiy says the Energy for Swim 2018 organizers are continuing to prepare for the meet, hoping to work with FINA to get the meet approved.

If the meet isn’t approved, though, sources tell SwimSwam that athletes have been warned by their national federations that they may be caught in the middle of a game of chicken between FINA and meet organizers.

For his part, Kachurovskiy said he didn’t believe athletes could be disqualified from future international competitions for competing at an unapproved meet, based on precedent involving the international skating federation.

We have reached out to several involved athletes to learn more about what they have or haven’t been told, and what they would choose to do if the meet isn’t allowed. We will follow up with more commentary from them at a later date.

Kachurovskiy said that if the Energy For Swim meet doesn’t ultimately move forward, that organizers would still pay contracted athletes 50% of their appearance fees.

Go ahead FINA, ban Kolesnikov, Le Clos, Sjostrom, Peaty, Cseh, Proud, Romunchauk, and possibly more big names from the sport. I’ll laugh when all of a sudden all of your support from national federations suddenly disappears in favor of a new one…

You probably don’t know what FINA abbreviation stands for. One way or another if national swimming associations coordinate their efforts internationally they form FINA.

Captain, there’s an ice berg ahead!

Well, tell it to move! This is the FINA Titanic, we don’t change course for anything!

Despite the fact that ISL declared that this organization will not be in competition with FINA this Energy for Swim meet is definitely in the conflict with the FINA’s SC World Championships. Not many swimmers are willing participate in both meets. It would be practically ineffective because swimmers won’t have time to adjust for the difference in time zones and difference in climate. Plus so much traveling doesn’t help neither. No wonder that many leading European swimmers will choose to stay close to home.
There are no doubts that organizers of European meet perfectly understood the situation and foresaw that it would lead to the strong reaction from FINA.
In this particular case I’m not sure which side… Read more »

FINA doesn’t seem to have a problem with weak participation in their various World Cup events, though. So why do they suddenly act desperate now? This is not the first time that some of the biggest stars have decided not to swim in the SC Worlds. Maybe some swimmers just don’t want to prepare for another big meet this late in the year?

FINA’s problem is that the best swimmers in the world have realised that ISL is the future of swimming and that they are choosing ISL instead of corrupt FINA.

FINA is the federation of national swimming associations. And each association is not only for the purpose of providing professional swimmers with the means of living. Want you it or not but some kind of bureaucratic system is needed and you cannot get rid of the army of administrators that govern it.

How many people care about Olympic medals in tennis? It is great that we have high prestige grand slam tournaments but they don’t interfere with OG.

FINA licks toes and the worst part is, is that they like it

This is the most unified comment section I’ve ever seen!

Bobo better not comment, or it’ll break the streak.

Until FINA finds this article

This is outrageous and masochistic. These guys care more about themselves than they do the sport.