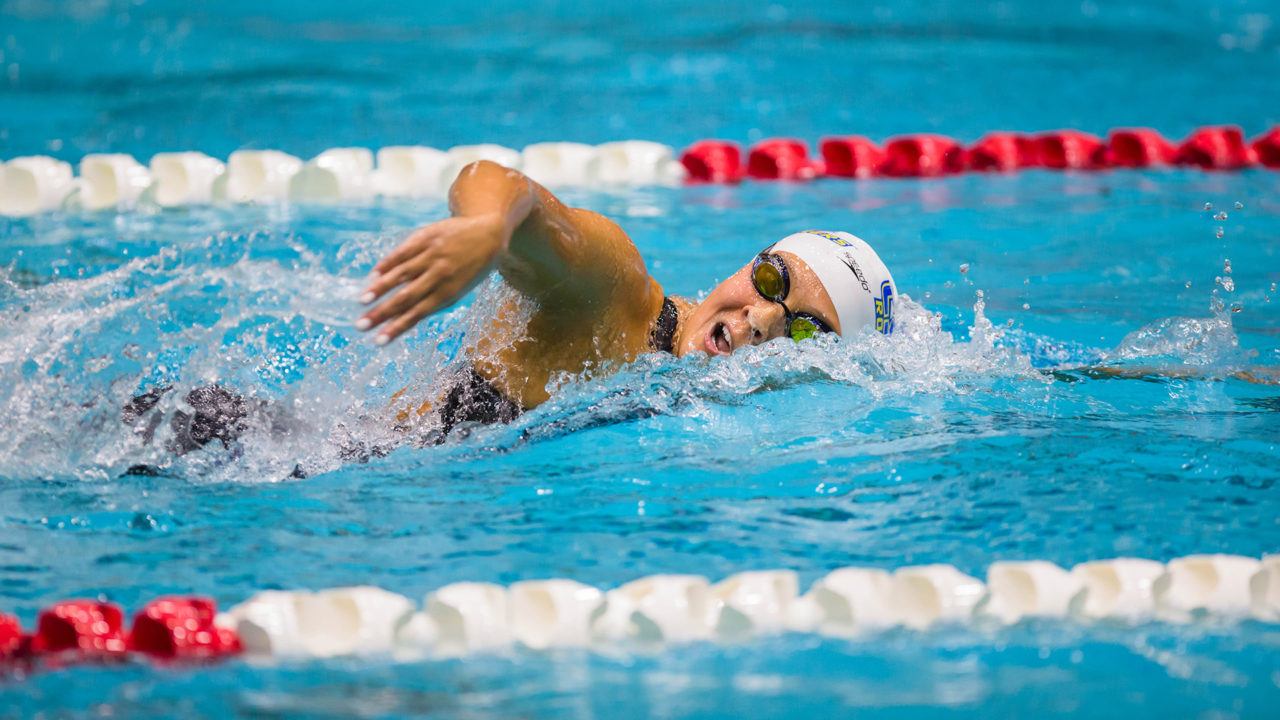 Competing for the third straight weekend at the John S. Hillman Memorial Aquatics Center, Jayssie Haynes won three individual events and was a part of CSU Bakersfield's winning relay team to lead the women's swimming and diving team to a 185-109 victory over Pepperdine. Current photo via Cal State Bakersfield Athletics

BAKERSFIELD, Calif. – Competing for the third straight weekend at the John S. Hillman Memorial Aquatics Center, Jayssie Haynes won three individual events and was a part of CSU Bakersfield’s winning relay team to lead the women’s swimming and diving team to a 185-109 victory over Pepperdine on Friday.

The Roadrunners won 13 of the 16 events contested this afternoon to earn the dominating victory in the squad’s second dual of the season.

“Today was a fun day,” said CSUB Director of Swimming Chris Hansen.  “We got to swim some off events and some fun events.  We have nothing now until UNLV at the end of the month, which will allow us to have a mini three-week training camp and then rest for a few days.  The UNLV Invite is big for Autumn (D’Arcy) and Jayssie to see what we have to do to get them to NCAAs.”

Autumn D’Arcy, the reigning Western Athletic Conference Swimmer of the Week, continued an impressive freshman campaign on Friday, winning the 200 free in 1:53.88 and the 200 backstroke in 2:08.43.  Her sister Summer D’Arcy also touched the wall in first in the 200 breaststroke (2:28.33).

The Roadrunners will compete against next weekend when the divers head to USC for the Trojan Diving Invite.

BAKERSFIELD, Calif. – Taylor Basin of the Pepperdine women’s swim and dive team had a first place and a second place finish at the John S. Hillman Memorial Aquatics Center on Friday afternoon in a loss to Cal State Bakersfield. The Roadrunners beat the Waves 185-109.

MEET RECAP
The Waves had three victories on the day. The first came when Juju Chan won the 100 breaststroke by 2.17 seconds with a time of 1:05.28. Anna Riekhof came in second place with a 1:07.45. In the 400 free relay, the team of Sammie Slater, Amy Griffin, Caroline Boone and Paige Brackett took the victory with a time of 3:33.10 to go along with Basin’s victory in the three meter dive.

QUOTABLE
“As a team we swam extremely well,” said head coach Joe Spahn. “This team is really learning how to race and compete. We had several life time best times, Olivia Kayye and Pia Anderson in the 500 Free, Lindsey Marian and Heather Brown in the 1,000 Free, Cassie Anderson in the 100 Back lead off and Catherine Gibbs in the 100 free lead off.

“It’s great to go out and set the pace in our conference. The confidence is very high especially coming so close to times from conference last year at this point in the season. The girls are ready to race again tomorrow!”

UP NEXT
The Waves are back in action tomorrow afternoon as they travel to Cal Poly for a dual match at 11 a.m.