FGCU Swim & Dive Heads to Miami To Take On Hurricanes 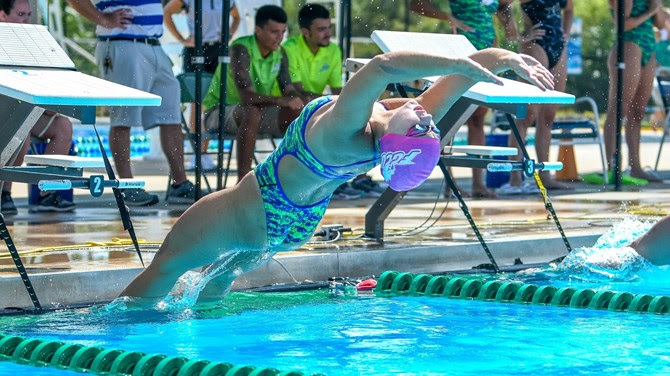 The FGCU swim and dive team hits the road for a dual meet against the University of Miami, Friday afternoon. The meet is scheduled to begin at 4 p.m. Current photo via FGCU Athletics

FORT MYERS, Fla. – The FGCU swim and dive team hits the road for a dual meet against the University of Miami, Friday afternoon. The meet is scheduled to begin at 4 p.m.

The Eagles are coming off their first home meet of the season against Vanderbilt this past Saturday. Despite setting a few top results in the CCSA, FGCU fell to the Commodores, 151-143.

Senior Petra Halmai (Dombovar, Hungary/Lanczos Kornel Secondari Grammar School) was named CCSA Swimmer of the Week after picking up three victories against Vanderbilt. She set top CCSA times in the 100 breast (1:03.42) and the 200 breast (2:17.62) en route to wins while also winning the 400 IM. As part of the 200 medley relay, Halmai set another top CCSA time at 1:43.89.

Halmai was not the only CCSA honoree for the Eagles this week as junior Reese Wakefield (Guelph, Ontario, Canada/Bishop Macdonell CHS) was recognized as Diver of the Week. She took home the victory on the 1m with a score of 268.95, more than 20 points ahead of the next-best CCSA score. She also finished second on the 3m with a solid score of 250.20, which is third-best in the CCSA this season, and just behind her sister Megan Wakefield (Guelph, Ontario, Canada/Centennial CVI), who won the event with 259.75 points.

Senior Wiktoria Czarnecka (Lublin, Poland/Liceum NR 10 W Lublinie) also set two new CCSA top times in two events, swimming 23.43 in the 50 free and 55.98 in the 100 fly, extending her own CCSA advantage to more than 1.5 seconds over the next-best time.

For Miami, this will be the Hurricanes’ second dual meet of the season after defeating FIU, 162.5-137.5 on October 2. They also finished fourth at the SMU Classic behind some of the top teams in the country in Michigan, Louisville, and Missouri and ahead of SMU and Arizona.

FGCU and Miami have met in the pool 13 times since 2009, with the Eagles holding an 8-5 advantage. However, the Hurricanes have won four straight in the series.