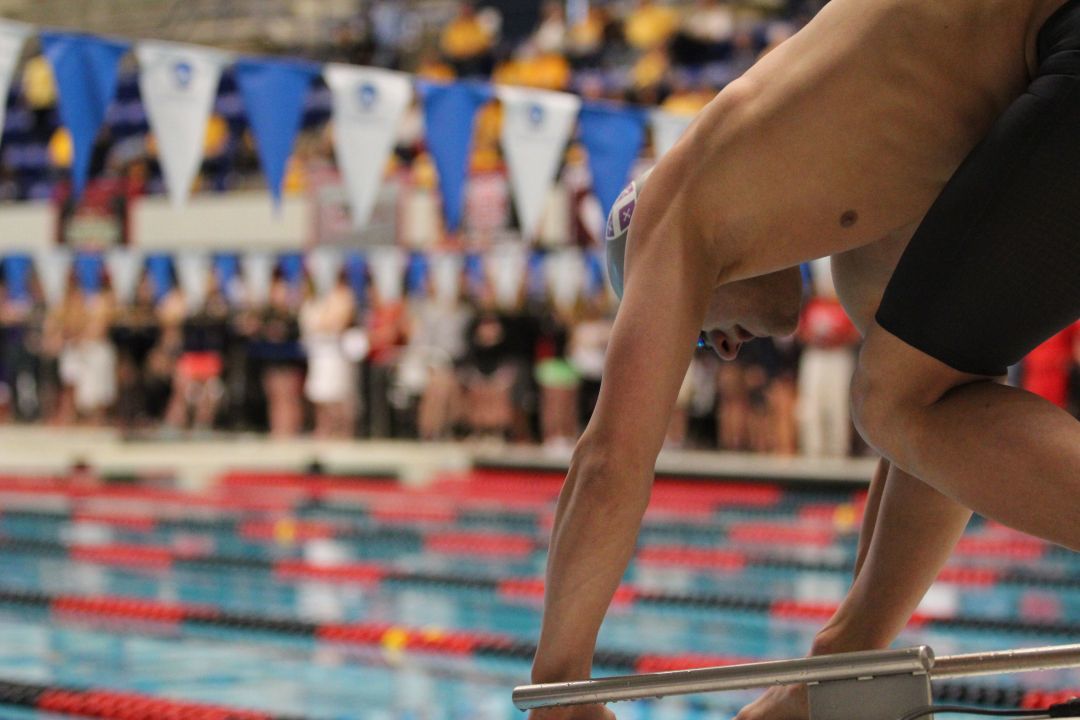 During the NCAC relays, Kenyon took control early and held on. In the swimming portion, contested in Gambier, nine event records fell and several swimmers put out some splits that may give us a glimpse of what this season will hold. Current photo via NCAC Staff

On Saturday, many of the North Coast Athletic Conference swimming and diving teams took to the water for the annual NCAC Relays. The relays include actual events – the 200 and 400 medley relays, for example – and some “for fun” relays, like the 3×500 relay for distance swimmers, or the 4×50 breaststroke relay. While not all the relays are normal meet fare, taking a look at the results can give us some idea of the depth we’ll be looking at for this season.

On both the men’s and women’s sides, the order of the top three teams was identical: Kenyon, Denison and Wooster.

For the women’s relays, the Kenyon Ladies reset three meet records including the 200 yard medley relay, which started the evening off. The quartet of Celia Oberholzer, Katie Kaestner, Hannah Cooper and Jenner McLeod posted a 1:45.65 to better the previous meet record by over a second. If we’re comparing across the board, that’s just a hair faster than the Eagles were in their winning relay against Wilmington, mostly due to a 26.77 split from two-time NCAA champion Oberholzer, and the closing speed of sophomore McLeod, putting up a 23.25 – a full second faster than the next quickest anchor in the NCAC meet.

The Ladies claimed three of the top four spots (although only the top relay from every team scores in the meet) in the 200 backstroke relay. Oberholzer was joined by Megan Morris, Cooper and Sam Palicz. With three of the four splits under 27 seconds for the Ladies, they might have some backstroke depth to be reckoned with this season. Denison’s Ashley Yearwood, a strong sprinter, posted the fastest split in the event, anchoring with a 26.42 to help Big Red to a runner up finish.

The Ladies reset the 200 yard breaststroke record by over a second, posting a 2:02.93 to take the top spot. The team of Laura Duncan, Kaestner, Ellie Crawford and Natalie Parker were just over a second ahead of Denison’s A relay. Kaestner’s split of 29.52 was the only sub-30 breaststroke split on the women’s side.

Possibly the most confusing event of the meet, the 500 crescendo relay is an exercise in counting skills and precision speed. The first athlete does a 50, the second a 100, the third a 150 and the anchor finishes up with a 200. Kenyon’s Ladies posted three of the top four relay spots, with Denison coming in runner up. It was back and forth across the splits the whole way between the Ladies and Big Red. McLeod’s lead off 24.24 was the fastest first 50 by four tenths. Denison’s Carolyn Kane posted the fastest 100 split (52.71) ousting Morris by two tenths. The Ladies’ Kaestner had the swiftest 150 at 1:13.4 and Big Red’s anchor Campbell Costley finished up with the fastest 200 split: 1:53.59, though it wasn’t enough to catch the Ladies.

The 200 butterfly relay went to the Ladies, showing some sprinterly depth for this coming season. McLeod, Cecina Babich Morrow, Morris and Parker all split 26-mid. The fastest split of the event, however, belonged yet again, to Big Red’s Yearwood, who posted a 26.07.

The 1500 relay is probably one of the best indications of the quality of distance athletes coming in for the year. The trio of Ladies who won this year – and set a meet record by nearly six seconds – were led by the runner up in the 500 freestyle from last year’s NCAA meet, Mariah Williamson. Williamson was joined by the talents of two distance freshmen: Kanchi Desai and Julie Dierker.  Williamson started the race off with a tight contest, just outsplitting the next fastest swimmer – Big Red’s Costley – 5:02.54 to 5:02.97. If nothing else, it’s clear the Ladies will have an outstanding distance crew this season, and the 500 and 1650 may be some of the more exciting events at the NCAC conference meet, and NCAAs.

The next event was another fun one, with each athlete swimming a 100 Individual Medley. None of the women touched under a minute, but the Ladies’ Kaestner came pretty darn close with her 1:00.06 lead-off leg. The Ladies claimed the victory in an extremely tight with Big Red as runner up less than a tenth behind.

In the second “real” relay event of the meet, the 200 freestyle relay, the Ladies again came out ahead. McLeod, Kaestner, Morris and Babich Morrow teamed up for the win. Kaestner – who had an impressive meet already, also put up the fastest split – and the only woman under 24 – in the event at 23.74. With a meet format that runs as quickly as the NCAC relays, the sprinters didn’t get quite as much rest between events and swam many more than they will at the end of the year. Still, Kaestner’s endurance should stand her in good stead for her events in the coming season. Additionally, the College of Wooster broke into the top four in this event with three-quarters of the relay being underclassmen.

For full meet results, click here. The Ladies will be back in the water on Halloween at The Ohio State University. Big Red returns to the pool on Saturday October 26 to host Malone University.

On the men’s side, they also took down a number of meet records, also beginning with the evening’s first event: the 200 medley relay. The team of Harrison Curley, Trevor Manz, Ryan Funk and Austin Caldwell posted a 1:32.72 to finish eight tenths faster than the record set the previous year. The two fastest breaststrokers were Manz (25.69) and Denison’s Al Nennig (25.79), about two seconds quicker than the rest of the field. The top four finishing teams (three Kenyon, one Denison) all had splits under 21 seconds.

The Lords went 1-2-4 in the 200 backstroke relay, led again by Curley. He was joined by Wes Manz, Kevin Magee and Alex Swaim. Denison was third. The best split of the bunch belonged to Magee, who posted a 22.58.

Denison displayed its strength on the breaststroke relay, putting together a meet record breaking effort with the team of Nennig, Damon Rosenburg, Brendan Howley and Joe Brunk. The quartet posted a 1:46.39 to beat the Lords’ A and B relays by over a second. Wittenberg was fourth. Denison’s Rosenburg is the national record holder in the 100 breaststroke, and split the fastest leg of anyone in the field by over half a second, putting up a 26.00. While Andrew Wilson may be one of the men to watch this year in breaststroke, Rosenburg may also make a big play at the year’s end.

The Lords took down yet another meet record in the 200 butterfly relay. All four of the quartet – Funk, Wes Manz, Christian Josephson and Caldwell – split under 23 seconds for a meet record 1:30.91, more than two full seconds ahead of their Big Red competitors. The fastest split of the event was also a Lord, but one who didn’t even swim on the A relay. Magee split a 22.44 swimming on the B relay which took third, a few tenths behind Big Red.

Arthur Conover, Joe Guilfoyle and David Perez teamed up to take the 1500 relay for the Lords by over three seconds. The Lords had three very strong athletes up in the distance relay, and showcased the strength they will be bringing to the show this year. After having lost a phenomenal distance athlete in Al Weik, Big Red looks to be regrouping and starting up another young distance crew with the two freshmen on its relay. Hohm led off with the fastest split in the field at 4:42.35. Big Red’s anchor leg Kevin Benson finished on a very strong last 150.

In the 4×100 Individual Medley, the Lords broke yet another relay record, this one set in 2011 by Denison. The quartet of Caldwell, both Manz brothers and Ian Reardon touched in at 3:32.10, over a second under the meet record. Denison was runner up. Trevor Manz posted the fastest 100 IM time in 51.56.

In the second “real” event for the men, the Lords showcased some of their sprint power with Caldwell, Duronio, Gates and Funk leading the way for a win. Three of their four were sub 21 with Gates putting up the fastest split in the event at 20.44. Denison’s runner up quartet showed some promising youngsters, who will likely make important contributions in the coming year or years. Ohio Northern finished fourth.

For full meet results, click here. The Lords will return to the water on Halloween at The Ohio State University. Denison will be back in the pool on Saturday, October 26 to host Malone University.

I am Percy Gates ‘ grandmother, love his swimming so well.