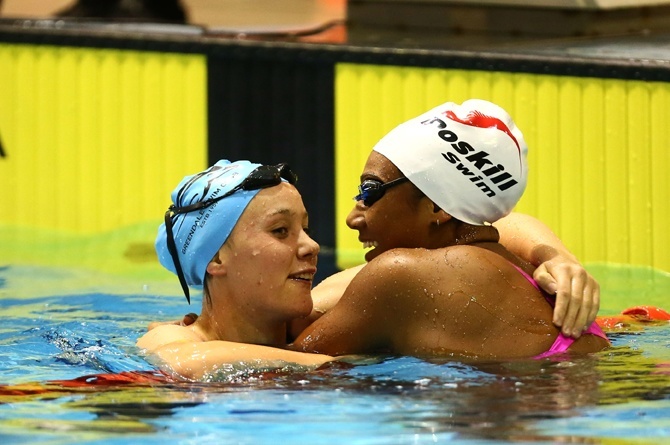 Fa’Amausili is Australian powerhouse Minna Atherton’s closest competitor in the women’s 50m backstroke at the meet, as evidenced by the heats and semi performances from today’s action. Atherton is attempting a backstroking sweep in Singapore, after already having claimed gold in the 100m and 200m distances.

In the heats, Fa’Amausili registered a 28.09 to Atherton’s 28.00, which overtook the old New Zealand national mark of 28.39 held by Emily Thomas since 2010. Ironically, for her part, Atherton’s time took down Fa’Amausili’s former meet record of 28.14 she set in 2013 at just 13 years old.  That time from Fa’Amausili was also the previous World Junior Record. You can read about that new record in more detail here.

Following up on her heat swim, Fa’Amausili was a tad slower in the semifinal, clocking a 28.14, but still holds the second seed behind Atherton going into Finals.  Atherton was the only swimmer to dip under the 28-second threshold in that semi, registering yet another new World Junior Record in the process (27.92).

Fa’Amausili is coming off of a monster New Zealand Short Course Nationals meet just over a week ago, where the youngster swam away with four meet titles (100 back, 100 IM, 50 free, 50 back).

The women’s 50m backstroke battle will continue in Singapore, with the women’s final slated for day 5.