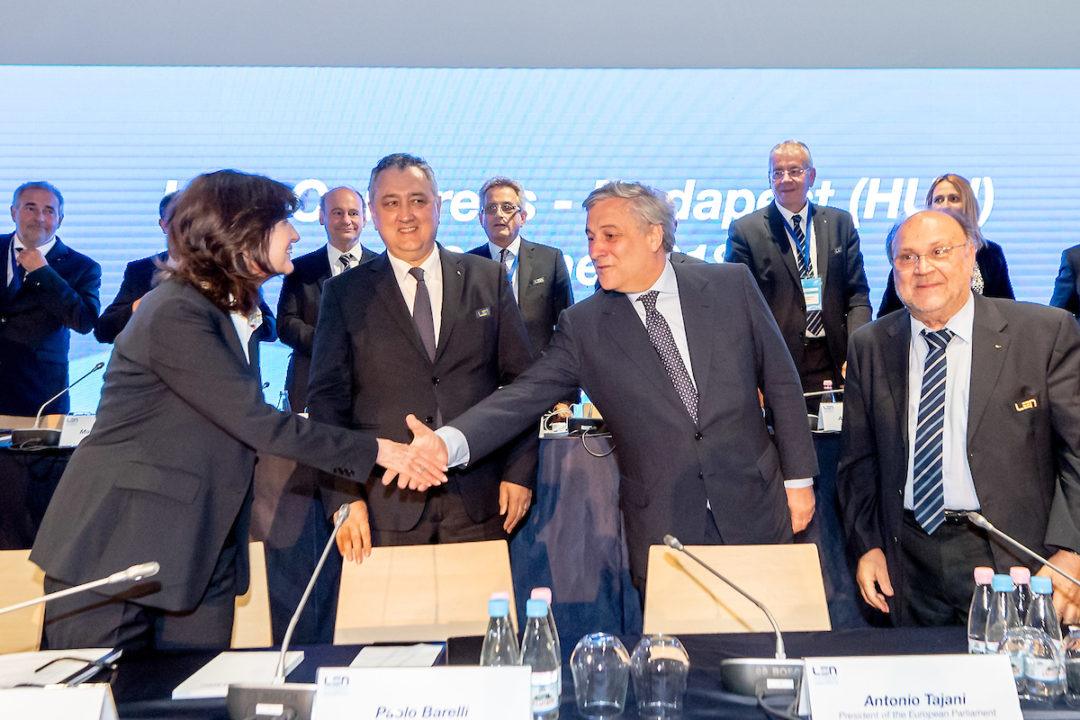 Antonio Tajani, President of the European Parliament met the LEN Family at the federation’s annual congress held in Budapest and gave his firm support to a new program ‘Learn-to-Swim, Prevent Drowning’, presented by LEN President Paolo Barelli. The LEN Congress approved the reports on 2017, as well as some rule changes and welcomed the positive financial results. Two new Bureau Members were also elected.

Highlighting the important role European Aquatics is playing in the continent, Tajani paid a visit to Budapest to meet the members of the LEN Family on the occasion of the 2018 LEN Congress. Accepting the invitation of Barelli, Mr Tajani gave his firm support to the federation’s new program called ‘Learn-to-Swim, Prevent Drowning’.

According to recent statistics by the World Health Organization (WHO), 27,000 people drown in Europe in every year, three in every hour, mostly children aged 3-12. LEN has launched this initiative targeting to decrease the number of the fatalities by at least 20 per cent in the next five years.

In his speech, President Barelli asked all 52 Member Federations to join the European Blue Card Program as well as to introduce the LEN Standards in swimming education.

“This is to be connected with a campaign on the values of swimming, promotion of the Culture of Water which should lead to have more people in Europe swimming more effectively, more regularly and more safely” he said.

LEN senior consultant Kelvin Juba underlined swimming’s impact on the health of a population which might also improve economic-related statistics as well.

In his speech, Tajani gave a brief overlook on sport’s role in Europe’s history and in the current days of the European Union. He described it as one of the most important activities which is part of our culture and equal with peace – as well as an area producing 3% of the EU’s annual GDP and offering 5.5 million jobs.

“Thanks to LEN’s efforts, swimming enjoys a growing popularity in Europe” the President said. “However, we all know that swimming doesn’t only have positive impact on health but also a live-saving skill. That’s why I fully support LEN’s program ‘Learn-to-swim, Prevent Drowning and I kindly invite you to Brussels to present this initiative to the top decision-makers of the European Union.”

The LEN Congress was held in the new treasure of aquatic sports, the Duna Arena. After the welcome speeches of Hungary’s Minister for Sports and Olympic silver medalist swimmer Tunde Szabo and the Deputy Mayor of Budapest Alexandra Szalay-Bobrovniczky, LEN President Paolo Barelli took the floor to present his report on 2017.

He recalled that European athletes had achieved tremendous success last year while claiming 105 medals at the World Championships (also held in Budapest) and amassing 353 appearances in the respective finals in the six disciplines, besting the other continents.

“This is your success, your athletes’, coaches’ and officials’ success” Mr Barelli praised the efforts of the National Federations. “We are to support you as much as we can, we offered an average one million euros per year in travel assistance and prize money.”

He added that in the last year LEN had strongly encouraged FINA to devote significantly more resources to its Members and the Continental Organizations. “Encouragingly, our voice has been heard. A lot more can be done but the launch the Olympic Solidarity Program is a welcomed change and a step in the right direction from FINA” the LEN President said.

He hailed the hosts of recent LEN Events which all met the highest standards – he gave a commemorative plaque to the former President of the Danish Swimming Federation Kjeld Egebo Larsen for delivering a world-class meet in Copenhagen, the 2017 European Short-Course Swimming Championships. He shared some thoughts on the upcoming events, including the European Championships in Glasgow this summer. “This first-ever multi-sport event is organized in order to gain even more TV exposure and media attention since there is a huge battle in this market and we do think that together with athletics, gymnastics, cycling, rowing, triathlon and golf we can be much more attractive” the LEN President said.

Among the goals set for European Aquatics and LEN, Paolo Barelli mentioned the even stronger cooperation “with the host cities and organizing committees of our Championships in order to create sports events of the highest possible level and to improve technologies including data handling, TV graphics, TV coverage, live streaming and promotion through social networks.”

The president thanked the exceptional work of the LEN Member Federations, the dedication of all LEN Coaches and Extraordinary Athletes, the passion of the LEN Technical Committees and Commissions, applauded the vision of the LEN Leadership, the support of the LEN Sponsors and Suppliers and the commitment of the LEN Office.

LEN Treasurer Tamas Gyarfas echoed the President’s words while presenting the annual financial report which highlighted a 30 per cent rise in the support offered for NFs and the prize money for athletes, thanks to the sound financial results obtained.

The Congress filled two vacancies in the LEN Bureau by electing Alexei Vlasenko (RUS) and Marius Hendrik Gerrit van Zeijts (NED) as new members. The delegates also approved a series of changes in the LEN Constitution and Rules.