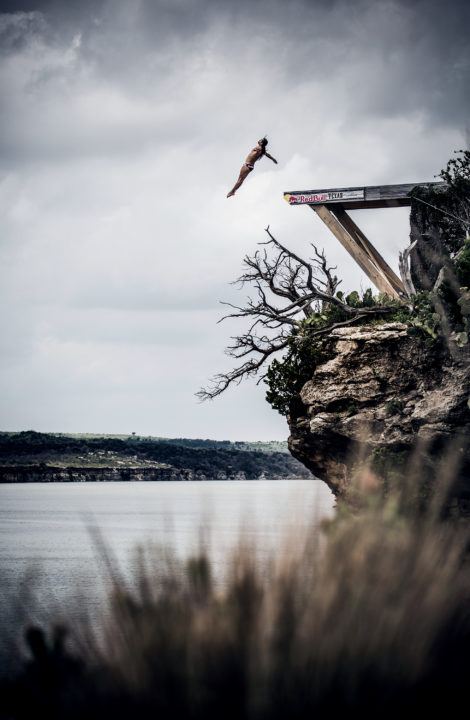 The first stop of the 2018 Red Bull Cliff Diving World Series gets underway this afternoon from Possum Kingdom Lake in Texas. Live results can be found here. Check out the live stream below:

After this stop in the U.S., the series will continue into Portugal, Switzerland, Bosnia and Herzegovina, and Italy.

The series first began in 2009, and women didn’t start competing until 2014. Jonathan Paredes of Mexico and Rhiannan Iffland are the defending series champions from 2017, both in action in Texas. Iffland is also the defending champ of this U.S. stop, while Paredes was 2nd last year to Great Britain’s Blake Aldridge.

That picture of the diver that just left the cliff is astonishing !! thank you . Those guys are impressive , its one of those ” on the edge ” disciplines that require so much work , discipline , fearlessness and sheer grit .

Fun fact .Rhiannon’s aunt was a very lovely Miss Australia in the 60s style of beautifully spoken & presented young women . Although she could not push thru to the Australian 10 mtr team because it had Olympic medallists quality , Rhiannon went higher & found her nuche . Congrats Rhiannon , NSW Diving & all of Newcastle is proud of you .