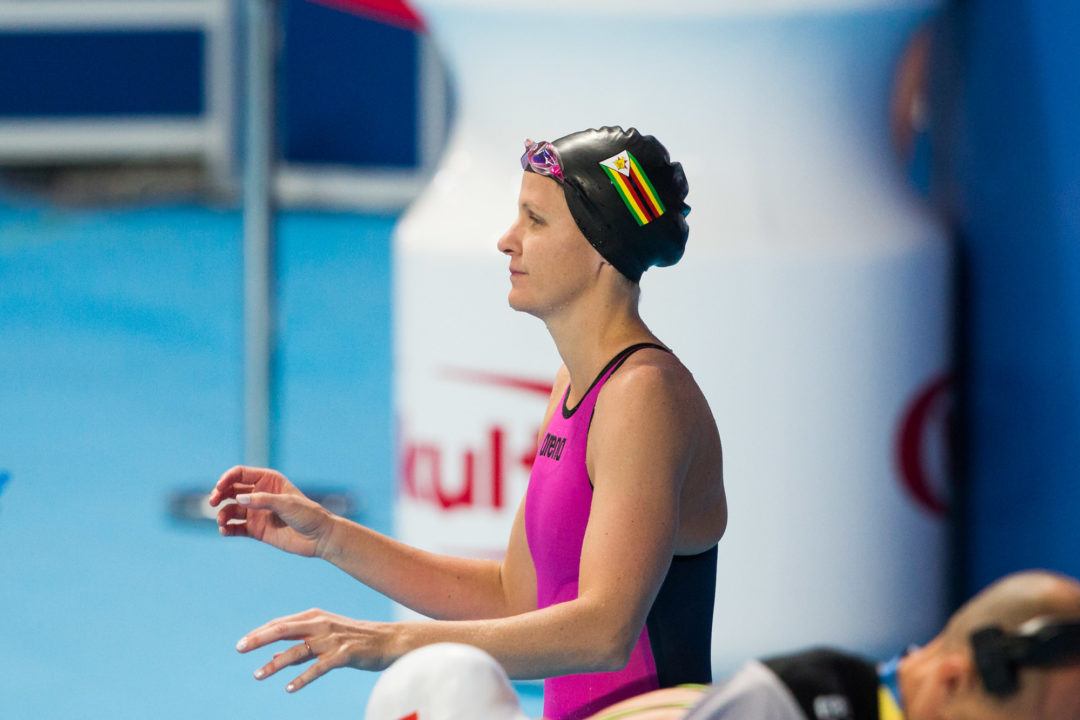 In the finals of the 200m backstroke at the 2009 FINA World Championships in Rome, Kirsty Coventry won gold and set a new world record of 2:04.81. Archive photo via Tim Binning/TheSwimPictures.com

The most recent swimming highlight dug from the FINA archives is a video of Kirsty Coventry‘s world record swim in the 200m backstroke at the 2009 World Championships in Rome.

Coventry, who represented Zimbabwe, came into the 2009 World Championships as the defending Olympic gold medalist in the 200m backstroke. She also set the world record at the Games with a time of 2:05.24.

In the finals, Coventry went out under world-record pace, but Russia’s Anastasia Zuyeva began to creep up on her in the last 50 meters, as did the world record line. Coventry held on for the win, however, clipping her own world record with a time of 2:04.81. Zuyeva finished second, while the USA’s Elizabeth Beisel picked up the bronze.

Coventry’s mark in the 200 back was one of 43 world records that were set at the 2009 World Championships. However these records were a source of controversy given that the swimmers who broke them were wearing full body suits. In fact, shortly after, FINA banned full body suits.

Despite this suit controversy, Coventry’s swim was still historic. It marked the first time a woman dipped under the 2:05 barrier in the 200m backstroke. Her record stood until 2012, when Missy Franklin swam an impressive 2:04.06 in the Olympic final in London. Coventry was also in that final. She finished in sixth place.

Coventry competed in 5 Olympic Games. She retired from competitive swimming after the 2016 Olympics in Rio, but remains actively involved in the swimming world.

For the longest time, I thought Kirsty’s name was pronounced as Kristy

I hold my breath every time I watch that touch though!

Kirsty Coventry arrived at the Rome World Championships with book makers predicting she could win 4 gold medals… By the time she swam the final of the women’s 200m backstroke in Rome, she had finished 4th in the 200m IM and a disappointing 8th in the 100m backstroke. She overcame a confidence crisis to win the 200m backstroke at that meet making her perfomance truly incredible… The Speedo LZR suit was only 50% polyurethane while the Jaked-01 and Arena X-glide of the kind now banned were 100% polyurethane swimsuits… Swimmers contractually bound to Speedo including Michael Phelps were seemingly at a disadvantage (Phelps lost to Bidermann in 200m freestyle in dramatic fashion but still went on to beat Cavic in… Read more »

If I’m correct, 7 individual Olympic medals is tied with the most held by any woman. That will probably change at Tokyo but that achievement makes us Zimbo’s pretty proud.