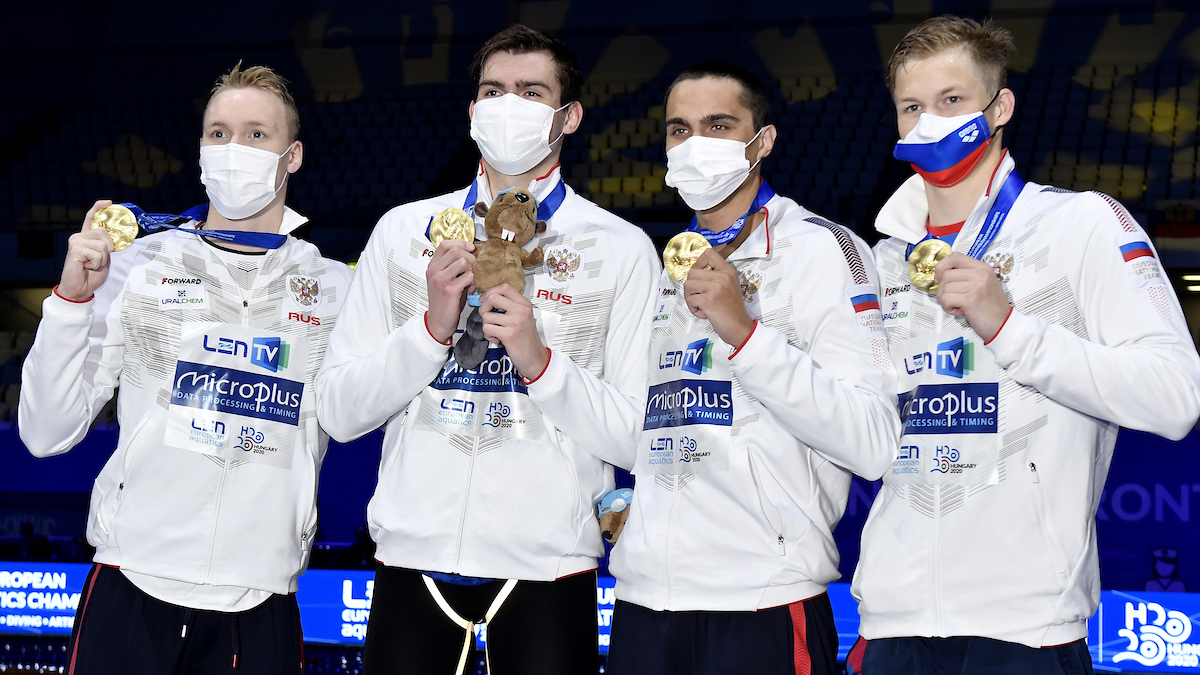 At the top, it's Russia's depth vs the U.S.'s leadoff superstar - but the battle for all three medals should be fierce in Tokyo. Archive photo via Andrea Staccioli / Deepbluemedia / Insidefoto

No one in the 2020 Tokyo Pick’Em contest precdted Tunisia’s Ahmed Hafnaoui (above) would place in the top 4 of the 400 free, let alone win gold.

The 2021 European Champs have the current world leader (Kolesnikov) and four of the top 11 swimmers in the world this season in the 100 free. That actually doesn’t even include Aleksandr Schegolev, who split 47.6 on that Euro-winning relay. Russia went 3:10.41 there, setting a meet record.

Between Schegolev, Evgeny Rylov and Ivan Girev, the Russian delegation (not technically representing Russia due to the nation’s doping sanctions) has the depth to rest anyone they need to through heats. At Euros, they swam 8 different swimmers between prelims and finals.

Kolesnikov will have a conflict between this event and 100 back heats and semifinals, but should be able to handle the double.

You could probably argue for the U.S. to join Russia above in the favorites category. The U.S. beat Russia by nine-tenths of a second at 2019 Worlds. They also have room to drop, with reigning world champ Caeleb Dressel threatening to break 47 seconds individually this summer.

Reliable depth might be more of an issue for Team USA than expected. Longtime 100 free mainstay Nathan Adrian did not make the Olympic team. Neither did 2019 breakout swimmer Ryan Held. Team USA has just five swimmers selected in this event, so they might need to get creative if they want to rest any of their top names through heats.

Australia took bronze at 2019 Worlds. While the U.S. will almost-certainly lead off with Dressel, Australia likes to use Kyle Chalmers on their anchor leg. That’s a scary thought for any other anchors in the field, with Chalmers being one of the fastest in history, the reigning Olympic champ, and the owner of perhaps the scariest second-50 of any 100 freestyler in the world.

Great Britain has their own star in Duncan Scott, a top-tier leadoff or anchor leg. They went 3:11.5 while taking silver behind Russia at Euros last month and Scott anchored in a blazing 47.1. James Guy split 47.9 on that relay and is a good option here too.

Scott and Dean will probably have to balance this relay with heats and semifinals of the 200 free on the same day.

It wasn’t that long ago that Hungary were the exciting up-and-comers in this event. They’ve got a good core of sprinters, and took fourth at Euros. There’s not a great flat-start time this year for Bohus, so we used his Euros split plus half a second (to factor out the relay exchange) above.

Brazil might have been a contender, with a 3:13 aggregate time from their top four swimmers. But the top Brazilian this year, 48.1 Andre Souza, was disqualified via a failed doping test. The new Brazil foursome still add up into the 3:14s and could still make some medal waves:

Host nation Japan has had three men in the 48s this year with decent depth.

Canada had Joshua Liendo go 48.1 at their Trials meet. They could be a factor if Yuri Kisil is in the mix – he went 48.4 in heats at Canadian Trials, but withdrew from the final with an arm injury.

The Japanese does not an aggregate time faster than Canada and France?

And I expect at least Chiereghini and Breno to be faster than 48 high even on this week at Sette Colli.

Does the us switch it up and lead off with Apple instead of dressel? Curry is somewhat of an unknown but he dropped 0.3 in the 100 and 0.6 in the 50. Regardless of his listed best time he is easily capable of a 47.3 split.

Definitely not. Apple has thrown down some massive relay splits before (in the 46s).

Dressel’s flying start is, for some reason, not as effective as his still start. Why waste one of the biggest weapons in swimming in Dressel’s start from the gun?

The reason his flying start isn’t as good as his flat start is because he uses his arms more than anyone I’ve seen in his flat start.

Nah, Caeleb’s flat start is his biggest weapon. I can’t think of a relay where he’s done a flying start, other than a medley, since 2016.

Even when he did I think he was not faster than his flat start.

Agreed. I haven’t gone back and looked at every relay, but my recollection is that he doesn’t gain nearly as much from the relay starts as others do. Better to have him lead.

For sure. If Dressel breaks the WR on lead off, like Michael Klim did in 2000, this thing could be over very early.

Then finish 4th in the Individual behind King Kyle, I’ll take that.

Could we possibly use Armstrong for a prelim spot? He swam a best time at trials the morning after, I’m sure, a sleepless night from making the team in the 100 back. He seems to be a decent freestyler based on his two Jr Nat’l titles in the 50 & 100 in 2019.

I like the idea of using someone extra so both Caeleb and Zapple can be rested, but do you really trust Armstrong more than Kibler, Townley, or Kieran?

Not about trust so much. Just saying he could be considered, depending on everyone’s schedule. He’s the 7th fastest 100 free on the roster this year.

I would like to see that and I think with enough focus he could throw down a good split. But it’s up to the coaches

Do we want to risk repeating 2015 though? With how early it is in the meet, you don’t have the benefit of seeing if a bunch of guys who haven’t been in situations like this before are “on” or not

Best way to resolve this (or at least make a more timely decision informed by more data than current) would be to do what they did in 2016 – have a bunch of guys on the team time trial 100 free partway through training camp. If Hunter or one of the guys above pops something surprising like 47-high, you put that guy on the prelims relay.

You can make good arguments for any of Australia, Britain, France, Italy, Brazil or Hungary winning bronze. It’s going to be carnage down that final 50 with USA & Russia fighting for gold, and potentially the rest of the field within reach of the bronze medal. I cannot wait.

Probably the strongest 4×100 free of all time. would not be surprised if 3rd to 8th will be 1sec apart..

2008 was pretty crazy too. I seem to recall nearly every team coming in under the former world record, and the South Africans with almost the same lineup that won in 2004 coming in 7th.

I think the 2008 games is a big reason for the depth of field in 2021. Figure you had a ton of age-groupers/pre-teens/teens (myself included) who really got into swimming from that race. helped re-energize the sport a bit. keeping really strong athletes in the sport + other athletes who were focused in other sports making the move to swimming full time

The US B-Team set the WR in the heats and then 5 teams beat that in the finals while a 6th finished below the pre-Olympics WR. The South Africans swam the 4 four swimmers that won gold and the set the WR in 2004. They finished a half second better than they did in Athens and only took 7th.

Don’t really see an argument for Hungary or France, France is slower than Canada and Hungary is only slighty faster + they can’t rest anyone in prelims. For me it is GB vs. Australia for bronze and Brazil might have an outside shot. At this point GB actually has to be considered favorite for bronze. Almost impossible to imagine that not at least 2 out of Whittle/Richards/Dean will drop time + they can afford to rest some of their guys in prelims + Scott is one of the best relay swimmers in the field (certainly far better than any brazilian/hungarian guy).

Agree that Scott is the best Split, but Chiereghinni + Spajari/Breno/Fratus (If Fratus is on form to swim 100) can probably go all 47 on splits

Something i forgot: Italy might also have an outside shot at bronze (especially if they can improve on their times this weekend).

With Mehdi Metella’s come back from his shoulder injury and Florent Manaudou swimming a smart 100, without fading in the last 15m, there’s a medal chance I think. But 100% agree that it’s less a given than some other teams and the team’s in a very different shape than in Beijing, London and Rio… So I guess we’ll see !

I think Németh won’t swim the heats, and Milák will be the anchor (heats), Kozma can swim it if he would be in good shape or perhaps Holoda.

I think you have nailed it. I see the US & Russia going for gold, with the US maybe & yes possible 5 teams for Bronze, but I seeing bigger improvements from GB side especially Whittle, which is so exciting, so I’m tipping GB to get the Bronze.

Nearly everybody will be faster.

uk got a 3:12 aggregate meanwhile duncan scott over there with his 46.1 split silently smiling

You’re delusional if you think that is repeatable. He had unique circumstances and got a big drag off Adrian.

It’s not that unrealistic for him to get a big drag in Tokyo. It’s pretty common in relays.

Santo was born in Japan… Any chances he switches a third time?

I think with Condorelli at his best Canada would have the same aggregate time as Australia.

Did Santo not make the Italian team?

We will find out this weekend (Sette colli)

Not yet. His last chance is Sette Colli this coming week. Though they’ve softened the selection procedures for relays in such a way that it almost seems like it was intentionally done to make room for him.