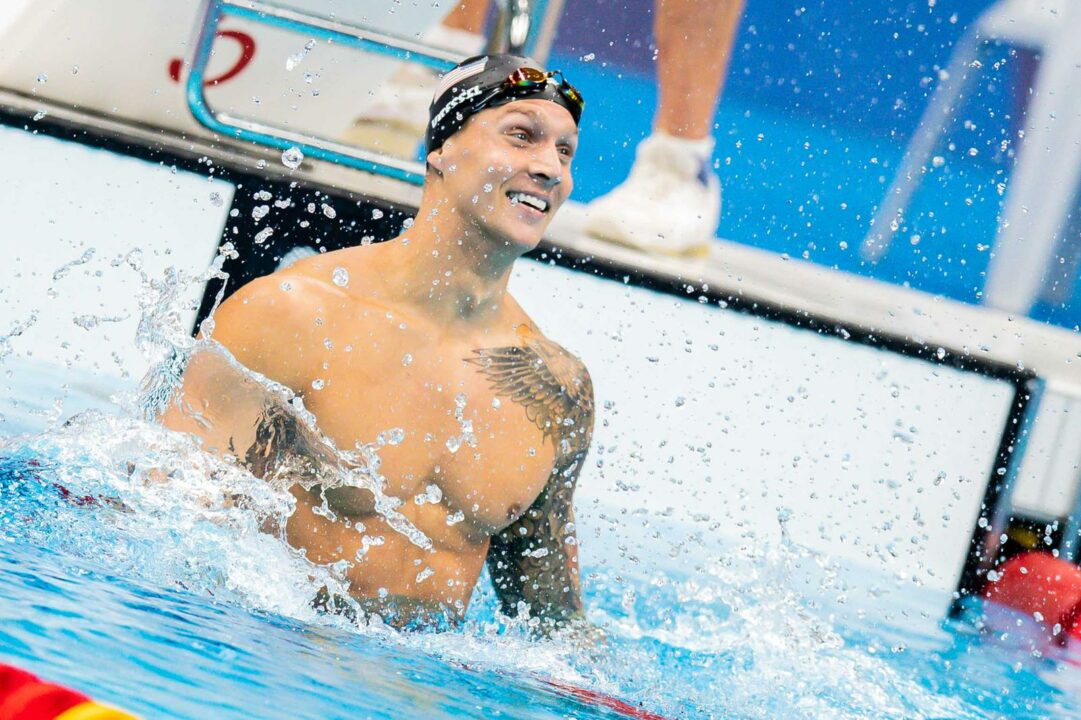 Dressel matched Joseph Schooling's Olympic Record of 50.39, while the defending champion from Singapore finished well outside the semis in 44th. Current photo via Jack Spitser/Spitser Photography

Caeleb Dressel carried the momentum from his first individual Olympic gold medal on Thursday morning forward into the evening preliminaries, equalling the Olympic Record in the men’s 100 butterfly.

Dressel cruised through the opening 50 meters of the eighth and final heat, turning fifth in 23.85 before powering up the jets with a scorching back-half of 26.54, touching in 50.39 to match Joseph Schooling‘s Games Record set in 2016.

The swim also registers as a tie for the 16th-fastest in history, with Dressel now owning 11 of the 17-quickest ever.

The 24-year-old American is the world record holder with his time of 49.50 at the 2019 World Championships, having won the last two World titles along with the 2018 Pan Pac gold medal.

There were also several National Records set in the 100 fly prelims:

As for the defending Olympic champion Schooling, he’s been well off form over the last few years, and hasn’t been able to come anywhere near medal contention here in Tokyo. Schooling finished 44th overall in a time of 53.12.

The more surprising miss was South African Chad Le Clos, who has won back-to-back Olympic silver medals in the 100 fly and was the 2015 world champion.

The South African finished in a tie for 18th, clocking 51.89, to miss the semis barring multiple scratches.

Can someone enlighten me what happen to the reigning Olympic, Asian, South East Asian champion Joe Schooling? 53.12 secs in heats is unacceptable considering he was training under sergio lopez in the states for over a year now…

he himself seems to be at a loss… well… time for military service, we’ll see after that if he tries for Paris

Maybe he has just overtrained

Schooling was so pissed after posting the 53.1 that he immediately rebroke that record in the warm-up pool by almost a full second.

Sighhhh. These jokes were old 3 years ago.

Nyls Korstanje : this guy helped his MMR team after qualifying his place for 100m fly semifinal.

Dressel broke Schooling for good on the last 25 of the 100 fly at NCAAs when Dressel no-breathed it and blew by him. Schooling was literally finished after that.