Dressel Qualifies First in 100 Fly, 100 Breast on Day 2 of All-Florida 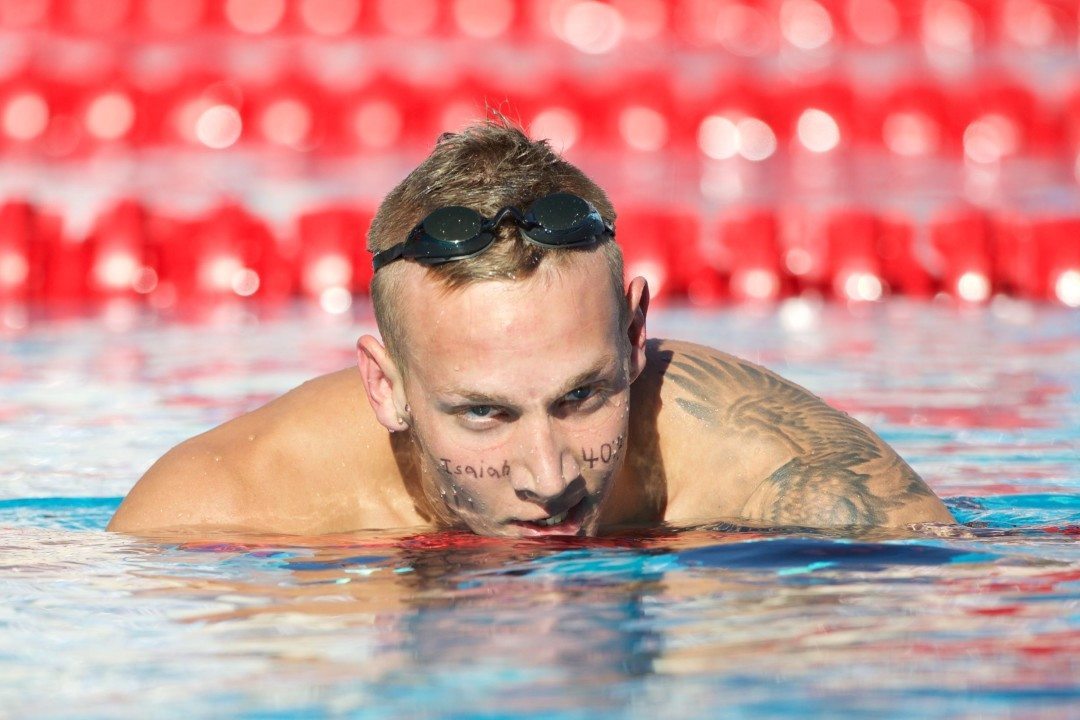 Caeleb Dressel impressed again on Saturday morning in Gainesville, but may be wearing more hats this year than last for the Gators. Archive photo via Rafael Domeyko, rafaeldomeyko.com

Florida sophomore Caeleb Dressel continues to explore different possibilities for his upcoming event schedule, coming off of a season where he was the NCAA Champion in the 50 free.

During prelims of day 2 at the 2015 All-Florida Invite on Saturday morning, Dressel was the top qualifier in the 100 fly (47.45) and the 100 breaststroke (55.36). That comes after winning the 200 IM on Friday night but placing just second in the 50 free after a much faster morning swim.

The breaststroke becomes an intriguing race for Dressel. In that win, he beat Florida State star Jason Coombs (55.89), D2 National Champion Anton Lobanov, and his own teammate, freshman Stanley Wu (57.23). After last season, Florida graduated their top three 100 breaststrokes, and Erik Kahr, their 5th-best, is no longer on the roster. That leaves Dressel as by-far their fastest known quantity in the event, with Wu and redshirt sophomore Quinn Cassidy (who hasn’t raced at this meet) to give the Gators a 2nd option.

While the Florida men have some holes in their lineups to fill this year still, in the events where they’ve traditionally been so good, they continued to excel on Satruday. They had the top three qualifiers in the 100 back (led by a 48.42 from Jack Blyzinskyj); the top five qualifiers in the 400 IM (led by a 3:54.96 from Mark Szaranek); and the top three qualifiers in the 200 free (led by a 1:39.01 from Pawel Werner). That men’s 200 free included Werner, D’Arrigo, and Main; three international swimmers with a chance at their respective countries’ Olympic teams, who with those swims declared their intention to still compete the NCAA season rather than take Olympic waivers.

On the women’s side for Florida, another young swimmer, freshman Hannah Burns, impressed with a 4:23.71 in the 400 IM. While new training in college will logically develop new performance patterns, in high school she was never anywhere near as fast as that time this early in the season in this, her best, event.

In the women’s 100 breaststroke, Katie Armitage from mid-major queens Florida Gulf Coast was the top qualifier in 1:02.80 – more than two seconds faster than Florida’s Paige Scheriger, who was 2nd in 1:04.95. The Gators’ top two breaststrokers, Theresa Michalak and Lindsey McKnight, haven’t competed at this meet.