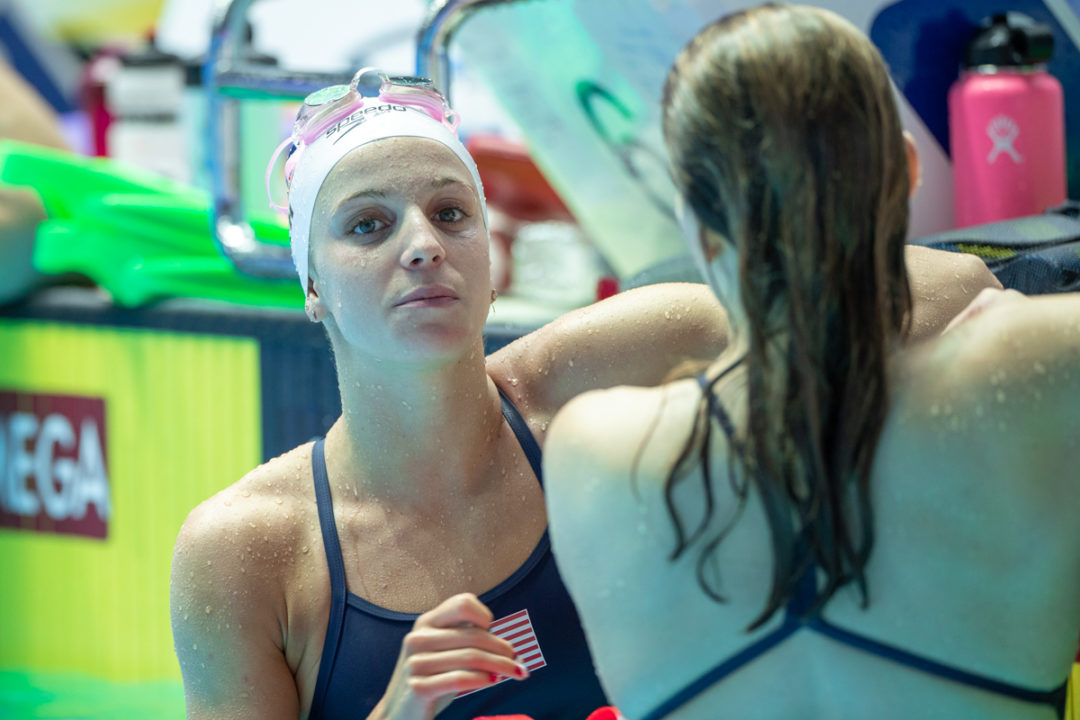 Regan Smith is still entered in and scheduled to swim the women's 200 fly on day 1 of the 2019 USA Swimming National Championships. Archive photo via “Rafael/Domeyko Photography”

The first day’s heat sheets for the 2019 USA Swimming National Championships are out, and there are both some glaring absences and some glaring inclusions.

The biggest scratch from the psych sheets on day 1 is one Caeleb Dressel, the swimmer of the meet at the 2019 FINA World Championships. He was entered to swim the 100 free where last week he swam an American Record of 46.96 to win 1 of his 4 individual golds at the meet.

Also scratching that 100 free is Justin Ress, who swam at the World University Games and won gold in the 50 back and bronze in the 100 back.

There were a number of highly-seeded scratches this week: a trend that we expect to continue throughout the meet and be coupled with prelims no-shows as well. Due to the nature of this meet, and its placement in between a number of high profile national meets, lots of big names will make the decision not to attend, in spite of ‘just in case’ entries.

While Dressel’s absence will deflate the session a little, the hype returns with Regan Smith still on the entry lists in the 200 fly. Smith last week broke World Records in the 200 back and 100 back, with the latter being on a World Record medley relay, in Gwangju. The year-out trials schedule probably robbed her of a few more individual swims, and now we’ll get to see those swims this week it appears.

While all swimmers returning from Gwangju will be battling some jet lag, Smith is only 17 (science shows that jet lag hits younger people less) and all of her races were in the 2nd half of the World Championships, so she won’t have had to drag her taper on quite as long as the rest of Team USA to be fast this week.

Hali Flickinger scratched the race as the top seed after taking silver at Worlds, while bronze medalist Katie Drabot is still entered. Drabot trains at Stanford, where the meet is being held. Her training partner Ella Eastin, who also raced at Worlds, has scratched the 200 fly, however. Many of the Stanford women (Simone Manuel, Katie Ledecky) are not racing, in spite of this being their home pool.

Grimm also listed on psych sheets for 100 fly, breast, back, and 50 free

dressel stills gets in tho right? cuz he swam it in worlds?

That national team? Yea. I mean unless 6 guys basically break the world record at Nats

Is conger’s 100 fly fast enough to put him on the national team right now? He’s cutting it close, if he cares about that, no?

Anthony Grimm vs Caeleb Dressel in 100 Fly will be awesome!