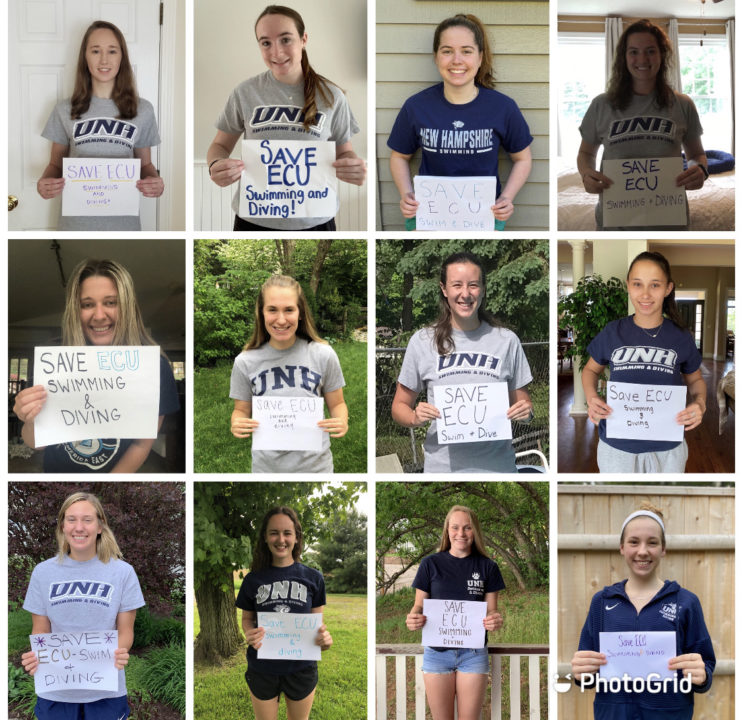 A group that is organizing in an attempt to reverse East Carolina University’s decision drop its men’s and women’s swimming & diving program has now raised over $380,300 in pledges from 127 donors toward their effort. That, combined with $4,670 in actual donations on a GoFundMe page, is driving the group forward in their efforts, even as former team members announce that they’re transferring to other programs.

The group is also now receiving guidance from Billy Rienhart, a political organizers and consultant who previously worked with the campaign to save 5 sports, including swimming & diving, at UNC Wilmington in 2013.

The group’s organizers tell SwimSwam that their plan is to take out television, newspaper, and digital ads to get their message out to the community in the hopes of rallying support for their causes. Local news stations have been covering the story, as has a local radio show that featured former head coach Rick Kobe.

The effort of publicity is an attempt to get attention of the school’s administration. Organizers say they have not yet received any interaction or meetings with administrators amid their efforts to find a way to continue the programs.

Below is a video featuring a number of the program’s alumni, current swimmers, and incoming recruits that was put together by alumni Lauren Dufault to share their experiences with ECU swimming & diving.

Last week, the school cut the programs, along with men’s and women’s tennis, as part of its effort to close a $10 million budget shortfall. Athletics Director Jon Gilbert said that the program was already in financial trouble prior to the global coronavirus pandemic, but that the financial strain of that outbreak grew the pressure to make deeper cuts into the athletics program.

Organizers of the fundraising say that their goal is to reach $1.5 million in pledged donations. According to an East Carolina working group that examined the plan to cut spending in the athletics program, the combined estimated budget for the men’s and women’s swimming and diving programs for fiscal year 2020 was $640,000.

The department, however, pointed to long-term facility issues as part of the decision to cut the swimming & diving program.

The group is also applying for grants that have been donated to other athletics programs on campus.

so, what’s the under/over the program, even with donations to cover the expenses, still gets cut? it happened at college of charleston and i believe clemson as well (but not 100% sure).

I’d say it’s extremely likely that the team gets cut. I don’t know how much it costs to run the team, but IMO the only way they can save the team is if they raise enough up front to convincingly say that the team can be self-funded for the foreseeable future until ECU gets its budget back on track.

How many years will $400k buy, factoring in coaches pay and benefits, scholarships, travel, equipment, facilities, recruiting, etc? If it approaches five years, then maybe there’s a chance, since ECU could *maybe* be in a better spot by then and annual fundraisers could supplement. We definitely can’t expect the team to pull in 400k per year on charity alone, the outrage… Read more »

yes, I believe and unfortunately, even with alumni raising the amount made public, clemson cut the program. brought back women’s diving for a bit and drop it.

Go go go ECU you can do it!!! We are all behind you! So sad that the “administrators” are not even meeting with any of these brave people.