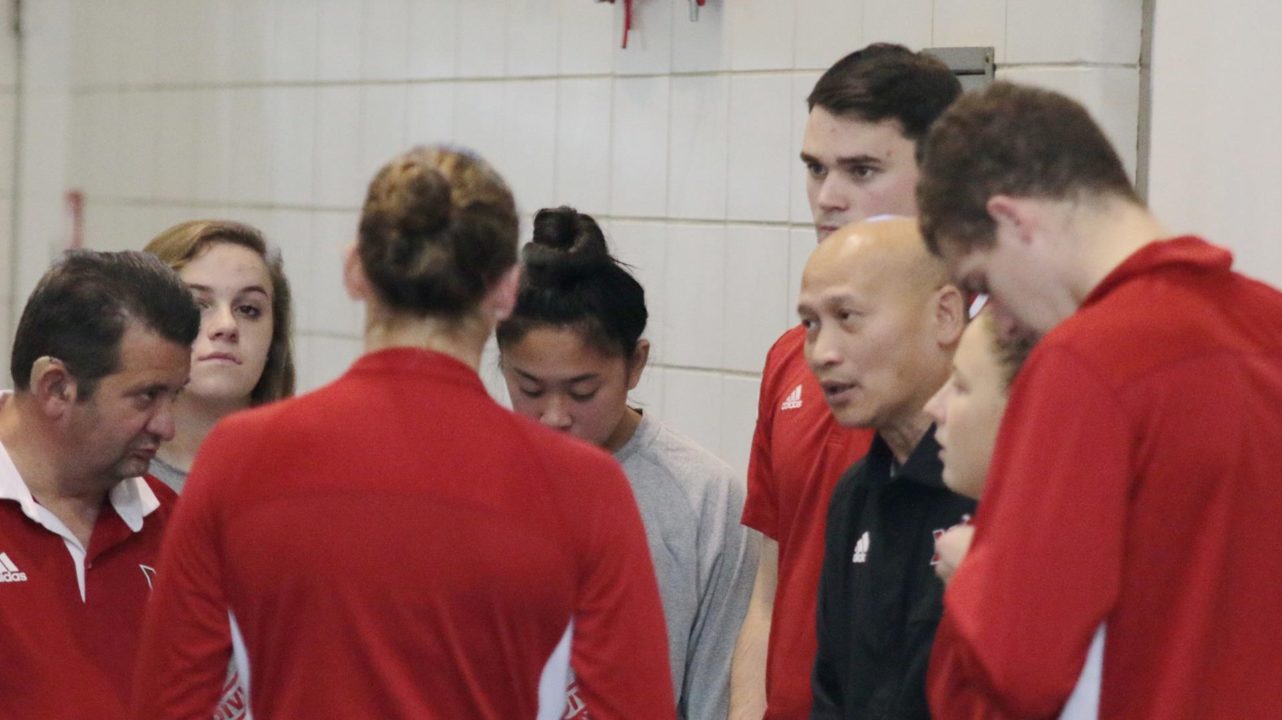 Li, who has coached a Mid-American Conference diver of the year in 10 of his 13 seasons at Miami. The school says he won't return next season. Archive photo via Miami Athletics

He also coached the last two seasons of Chris Heaton’s career at Miami, where he finished his career undefeated at the MAC Championships and was twice named MAC Diver of the Year. That continued into the 2010 and 2011 seasons, where Jimmy Beres was named the Conference Diver of the Year.

On the women’s side, the women’s team was 4th with 408 points, about half the points of the champions from Akron.

The Mid-American Conference only holds 1 meter and 3 meter events at its conference championship meet. Last season, the Miami men scored 52 diving points, as compared to 81 for Missouri State. Missouri State did use 3 divers instead of 2, however, and with only 10 male divers competing in the 5-team conference, there were significant points to be had just by entering more divers.

Miami’s top performer on the men’s side was Sam Wiedemann, who was 3rd on both the 1-meter and 3-meter for the men.

On the women’s side, where there were 29 competitors in each diving event and points weren’t assured via a legal finish, the Miami women scored only 3 diving points with 4 divers entered.

Lin has some international experience as well. He served as Team Leader for Team USA at a 2018 FINA Diving World Cup event. He also served as a coach consultant for USA Diving in the 2013-2014 season.

I wish him the best, but he didn’t develop talent very much, they can do much better.

Coach Bonewit-Cron has been a sub par coach who has had problems recruiting from the very talented local Ohio talent that is being poached by their rivals at UC. As a result she resorts to international recruits in order to buff up a program where she fails to develop most of her swimmers. KR had similar problems developing and was often able to bring in talent from China. His most recent recruiting efforts must’ve been unfruitful internationally, not a surprise as he couldn’t even fill his three men’s slots on the team last year. Must not been worth his pay grade with most recent budget cuts.

Coach Hollie Bonnewit-Cron is one of the best coaches in Division 1 Swimming period. In four years she has flipped the program into something special. Those words are hurtful and pretty untrue.

One of the best coaches in division 1 period?

How many Coaches has she run off in her time at Miami(OH)?? If she’s such a great coach why isn’t she moving up from the mid major program?

Bonewit-Cron has single handedly run that team into the ground as head coach. I feel bad for the swimmers who committed to what was once a promising team only to have their careers ruined and love for the sport tarnished. Perhaps Miami Athletics should look more into removing her.

Didn’t the men just win their first championship in 13 years in 2019?

In a conference with 4 other teams who are not actually in the MAC. If you consider that to be a triumphant win, by all means go ahead. If EMU hadn’t been cut they most certainly would not have seen the same outcome.

Even so, how does winning a championship even with only 5 teams in the conference for the first time in 13 years count as “running the team into the ground”? It doesn’t.

I hope Miami athletics investigates that HBC forced 4 female divers off of team this year. Did this help her get rid of KR? One would wonder ..

Can you elaborate on that? I’ve heard she wanted someone new to coach diving and KR definitely didn’t choose to leave. My daughter was being heavily recruited until his departure. We loved the school itself, but she certainly won’t commit or continue to pursue a school that doesn’t have a coach.

KR loved Miami and had no desire to leave the program. Getting out from under HBC’s dictatorship with be the best thing for him. He wasn’t able to make a single decision for the divers this last year for fear of losing his job. HBC is nothing but a bully and tries to intimidate every athlete and coach on that team. She thrives on power. She represents nothing that Miami stands for. Any athlete considering joining her team should most definitely do their research.