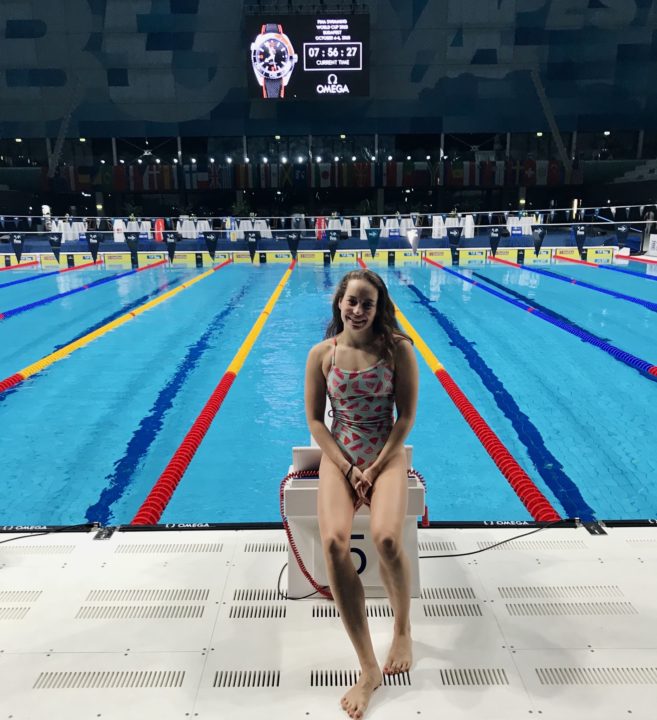 Vavrinova (above at the 2018 World Cup in Budapest) was one of the faster swimmers in a young ECU core that found themselves without a program 2 weeks ago when the school announced it was cutting its swimming & diving programs. Archive photo via Adela Vavrinova

Goldblum, who was recruited to NC State by current UNCW head coach Bobby Guntoro, will arrive with a 200 free best time faster than the UNCW school record.

Adela Vavrinova will transfer to the University of Arkansas in the fall of 2020, continuing a hot recruiting spring for the Razorbacks. Vavrinova, from the Czech Republic, is one of a number of swimmers who were left without a program when East Carolina announced on May 21 that they would cut their men’s and women’s swimming & diving programs.

“I’m really happy to announce my verbal commitment to the University Of Arkansas!” Vavrinova said. “I chose the University of Arkansas because of the great swimming and academic program.

“After I found out, that ECU will no longer support our swimming and diving program, I was shocked and speechless. Then Neil Harper reached out to me, and he helped me to explore what the University of Arkansas offers. I had also the opportunity to talk with few girls from the team and they made me feel like Arkansas would be a great fit for me. I want to thank everyone from ECU for an amazing freshman year and all the support. I‘m really excited to join the Arkansas Razorbacks family this fall!”

She joins Sara Nieplova (Florida Gulf Coast) and Kristen Stege (Tennessee) among former ECU swimmers who have announced their decisions to transfer since the season ended. Stege, an NCAA qualifier, announced her decision before the program was cut.

Last season, in her first season of collegiate swimming, Vavrinova made individual A finals at the AAC conference championship meet in the 200 IM, 400 IM, and 100 free.

She was part of a very young relay nucleus for the pirates last season as they finished 4th out of 6 teams at that meet.

Originally from the Czech Republic, Vavrinova has represented her country internationally at a handful of minor meets, including the 2017 LEN Multinations Junior Meet.

She’ll join British sprinters Emily Barclay and Macy Lawrence as late additions for the Razorbacks for the fall of 2020 as coach Neil Harper looks to build off the success that the program had with Anna Hopkin, who finished her 2-year NCAA career last season as one of the fastest sprinters in American collegiate history.

The Arkansas women finished 10th out of 12 teams at last year’s SEC Championship meet, but it was depth more than top-end quality that inhibited the Razorbacks last season. They had only 7 swimmers or divers who scored individual points at last year’s SEC Championship meet. Vavrinova isn’t quite at SEC scoring level yet, but is very close in a few events.

Vavrinova joins a big class for Arkansas that is scheduled to arrive in the fall of 2019. Others in the class include Isabella Cothern, the fastest recruit out of Arkansas who split 48.9 relay at the Arkansas high school state championship meet this year; Hannah Cech, a 2:04 IMer from Ohio; Bradi Jones, a 1:03/2:18 breaststroker from Alabama; and an elite diver Jordyn Feiwell the best diver out of Indiana this year. Other future Razorbacks arriving in the Fall are Serena Gould, Anna Erivin and Abby Pfeifer from Texas, Lizzy Linartas from Florida and Grayson Payne from Tennessee.