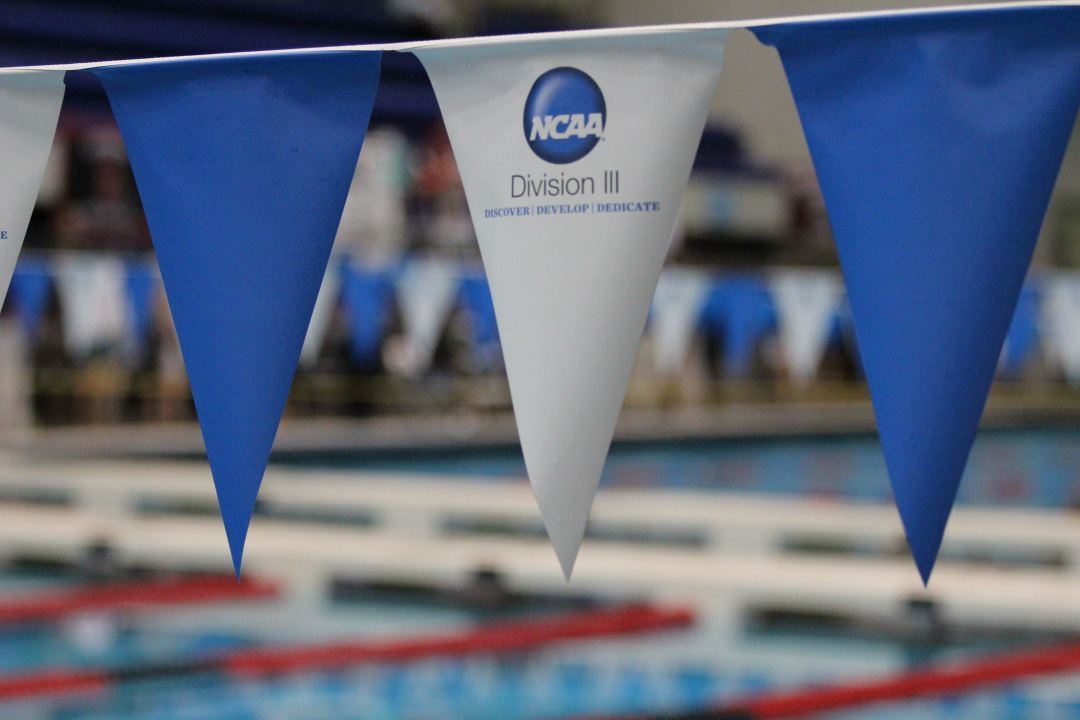 Mary Washington's Robin Brazier and Chicago's Tony Restaino are featured in this Senior Spotlight, a a tribute to the athletes of Division III, showcasing seniors from across the country who have brought their own passion to swimming and academia. All hail DIII. Current photo via NCAC Staff

Division III is remarkable. The student-athletes who attend and compete at DIII colleges do so without monetary compensation and often in conjunction with rigorous academic schedules and a good deal of extracurricular activities thrown in as well. Over the course of my own collegiate career, I shared pool space with athletes who developed robots, helped with political campaigns or competed in foreign countries. It is these stories and these athletes who best exemplify what it means to be a student-athlete at the Division III level.

What follows is a tribute to the athletes of Division III, showcasing seniors from across the country who have brought their own passion to swimming and academia. This series of articles strives to capture some of the many incredible, interesting or quirky things our swimming and diving seniors have done while out in the wider world.

Not All Who Wander Are Lost

For Mary Washington senior Robin Brazier, helping people is a way of life. Brazier’s major is geography, specifically human geography focusing on the social demographic and development issues. Her field of study covers how humans interact with their environment, what feels like home and how identity meshes with the land. This human approach to geography – as opposed to simple physical cartography – has had an impact on Brazier’s own social (and global) interactions.

Brazier first got started with social issues as a freshman with the Mary Washington chapter of Invisible Children. The program is mostly an awareness campaign with a side of fundraising. Currently Brazier is the president, but starting as a freshman, she was just another member learning about the problems facing the rest of the world. The founders of Invisible Children – three American filmmakers – visited East Africa in 2003 looking for a story. “They stumbled across a civil war,” Brazier said. At 27 years and counting, this particular civil war is the longest armed conflict in African history.

The warlord Joseph Kony commands an army of abducted and brainwashed children who are brought up in a culture of violence and fear. “What we do at UMW and what other chapters all over the country do [is raise] awareness on campus of what Invisible Children is, who Joseph Kony is and how we’re going to handle justice,” said Brazier.

However, dealing directly with the warlord is a little outside of even the most ambitious collegiate student’s realm. “We do fundraisers,” Brazier explained. “The money that we raise will all go to making radio towers and early warning networks so that neighborhoods can communicate to each other about where the rebel army is.”

In addition, the organization funds rehab centers for ex-child soldiers. “Most of them are orphans, [and] have been brainwashed; they only know violence,” Brazier said. The third way raised funds help the cause is through defection flyers: “They’re pretty much flyers that are in the native language that say, ‘This is why what you’re doing is wrong, and this is how you can come out and be free.’” According to Brazier, the flyers are effective ways of communicating with the soldiers who have known no other life.

As the president of the UMW chapter of Invisible Children this year Brazier will be responsible for organizing the chapter’s fundraisers, including a triathlon and their traditional Valentine’s Day benefit in which members are auctioned off to go on a date with each winning bidder. The funds are sent to the Invisible Children headquarters in California at the end of each semester.

But how did the draw of Invisible Children and Africa result in Brazier spending several weeks in Guatemala?

In the spring of 2013, Brazier took a class with UMW professor Dawn Bowen. “I took her Development in Guatemala class. And that was a spring class that’s pretty much geared towards the study abroad trip in Guatemala just during spring break.” The class focused on Guatemalan history with particular emphasis on the Mayan area the class would be visiting over the eight day trip.

For Brazier, the experience was life-changing. “I just met so many young girls who were doing all they could just to pass sixth grade.” According to Brazier, many female students drop out earlier because female education is not valued or because they are needed at home. “I was meeting girls who were obtaining scholarships to pursue a career, or more than just making babies,” she said.

Fast-forward a year and a half.

“I’d been interested in Guatemala since I went with [my] study abroad program,” Brazier said. This past summer, she reached out to a family friend who is on the board of a small NGO called Pueblo a Pueblo to ask what was available in the area she had visited before. He put Brazier in touch with the executive director of the program. Brazier asked if she could be sent back down to Guatemala to help out. “I did that pretty much all myself. It wasn’t with any program,” Brazier added.

The literacy project formed the bulk of Brazier’s work effort during her time in Guatemala. “I was helping make the libraries in the small schools,” she said. “I was putting them together, figuring out what books they need, [and] cataloguing the books.” In Brazier’s “free time” as she spearheaded the literacy project, Pueblo a Pueblo also recruited her help with their Gardening Program.

“I would go around with the local gardeners help them build gardens for the schools,” Brazier said. The project is intended teach students about the process of growing food in order to increase self-sufficiency. Brazier also worked with the Maternal Health Program and Hygiene Clinic. “I would just kind of go with the program coordinators and see what they were doing at these schools. All these programs mostly were working with schools in the area,” Brazier said.

After witnessing the young girls’ pursuit of education in her sophomore year, this was Brazier’s first time actually participating in the programs to help children and families in Guatemala. “I had seen [Pueblo a Pueblo] and knew of them, and learned a lot about them my first time there, but this was my first time actually working for the NGO,” Brazier said. After her first trip to Guatemala where she observed the programs rather than contributing, Brazier said her involvement was a welcome change. “I was making relationships with the people down there. Hopefully those relationships continue,” she said. Post-college Brazier said her humanitarian work will also continue: “I’m definitely staying in touch with Pueblo a Pueblo.”

She also wants student-athletes at all levels to realize that commitment to a sport – while wonderful – doesn’t automatically exclude participation in activities around the school, or even around the world. “It can be done. Everything can be done. It’s the perfect balance here,” Brazier concluded.

Chicago senior Tony Restaino is also of the opinion that in a Division III setting, anything can happen. Restaino is a national caliber diver from Knoxville, Tennessee who began his career as a gymnast.

Restaino described himself as “one of those idiots who saw the Olympics on TV” and thought, “Oh – I could totally do that.” Before he had even turned nine, he was tumbling his way onto a path that would eventually lead him to the NCAA DIII Championships. Gymnastics was a little more difficult than the young Restaino had anticipated: “I found out I really couldn’t [do gymnastics].” Floor exercises and tumbling were the only place where Restaino could hold his own, and after an incident where he missed the springboard for vault entirely, his coach suggested he try diving.

Now entering his senior year, Restaino has accomplished three-quarters of a perfect attendance record at the Division III National Championships and seen his team rise from nowhere to tenth on both the men’s and women’s teams at the 2013-14 NCAA meet. He spoke candidly about wanting to final on both boards at this year’s NCAA final or win the conference meet.

In the 2013-14 season, Chicago’s men were second at the UAA Conference, trailing Emory by just 3.5 points. Due to inclement weather, the unconventional Conference meet was split into many meets and results were combined to produce the final tally – still, the Maroons picked up eight first place victories for the men (three of which were new UAA records) and one for the women (also a UAA record).

As a new crop of talented young swimmers and divers prepares to join the team, Restaino added, “A sort of vague, overall goal [of mine] is just not miserably failing.” After starting out his freshman year on a team that placed 29th at the NCAA championships, it’s fairly safe to say that Chicago is moving in the right direction. “Our team is becoming incredibly talented, which is nerve-wracking for people like me,” Restaino joked. “I think, ‘Crap, we really have to step up our game now.’”

Off the boards, Restaino is also preparing other young adults to step up their game – in the classroom. As a part of the Chicago Peer Health Exchange (PHE), Restaino works with children teaching classes two or three times a week in his limited spare time. “I started my sophomore year,” he said. He works with special education, teaching health and nutrition and works on the formation of healthy relationships.

The PHE trains college volunteers to teach high school students a curriculum of health workshops, with the idea that the similarity in ages between student and teacher will help foster learning. The classroom experience often compels volunteers to want to continue in the health field and keep giving back to the community. Restaino is doing both: this summer he studied for his MCATs, with the intent to apply to medical school and study T-cell leukemia; he also continues his health advisory role as his dorm’s elected health representative.