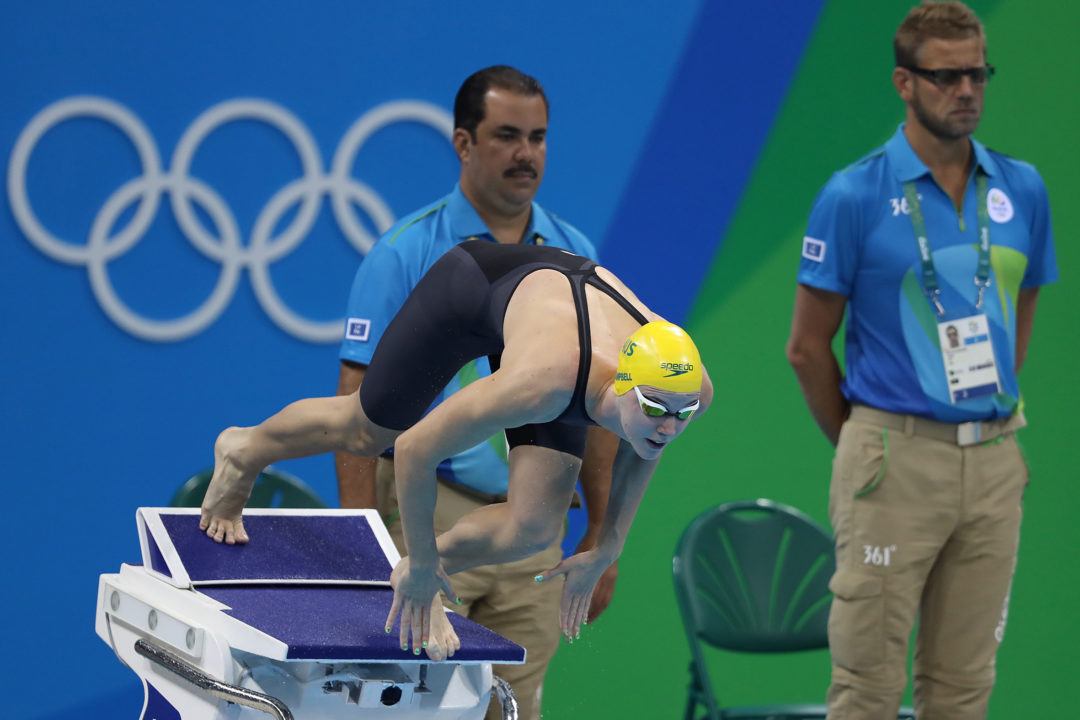 The Campbell sisters will look to rebound this morning (or afternoon) in the 50 freestyle after a disappointing 100 freestyle final last night. Current photo via Simone Castrovillari

After a shocking finish last night that resulted in world record holder Cate Campbell and 2015 World Champion Bronte Campbell off the podium in the women’s 100 freestyle, the Australian duo will look to comeback stronger today in the 50 freestyle.

Cate showed her incredible speed last night, out first at the 50m mark in 24.77, but simply couldn’t bring it back and finished 6th. She won’t have that problem in the 50, and certainly remains one of the favorites for gold.

Bronte also disappointingly finished 4th, but was also the World Champion last year in the 50 so she’ll be strong here as well.

The Campbell sisters hold the top two seeds, both entered at 23.84, that earns them each lane 4 in the two fastest heats, 11 and 12.

Joining Cate in heat 11 will be last night’s joint 100 freestyle gold medalist Simone Manuel and Great Britain’s Francesca Halsall, who is one of three women to have broken 24 seconds since 2010.

Bronte will swim alongside 100 free bronze medalist Sarah Sjostrom of Sweden, who, along with Cate and Halsall, has broken 24 seconds since 2010.

The only other individual race of the morning will be the men’s 1500m freestyle, which will feature Australian Mack Horton and China’s Sun Yang swimming in the same heat. This comes nearly a week after Horton and Sun had a feud during the men’s 400 freestyle, where Horton was quoted as saying “I don’t have time for drug cheats”, when he didn’t stop to acknowledge Sun in the warm-up pool prior to the meet.

Horton went onto win gold in the 400 free, a devastating loss to Sun that left him in tears.

Sun and Horton will swim in the first circle seeded heat, heat 5, with Horton in lane 4 thanks to his #2 world ranked time of 14:39.54 done at the Aussie Trials in April. Sun will be out in lane 7, as his best time over the last year and a half is from the World Championship prelims of 14:55.11 after he skipped the final in a puzzling last minute move. His form in this distance is up in the air, as the 400 free on Saturday was the first time he’s looked vulnerable in a race 400 metres and above since before the 2012 Olympics.

Joining those two in heat will be 400 free bronze medalist Gabriele Detti, two-time Olympic medalist in this event Ryan Cochrane and the USA’s open water specialist Jordan Wilimovsky. Detti appears to be on great form, and could surprise for one of the medals like he did in the 400. Cochrane will look to win his third consecutive medal in the event, but will need to show better than the 14:51.08 he was last summer. Wilimovsky was a lifetime best 14:49.19 at U.S. Trials, and will have his first swim in Rio today.

The last heat has World Championship gold and silver medalists Gregorio Paltrinieri and Connor Jaeger in lanes 4 and 5. Paltrinieri may or may not have won the world title last year if Sun had showed up, but he proved he is the definite favorite here with his swim of 14:34.04, the 2nd fastest ever,in May at the European Championships. Paltrinieri didn’t compete in the 400, so this prelim will be his first race in Rio.

Jaeger also benefitted from a World final minus Sun, even saying in an interview after the race “that was good for me”. Jaeger exploded in Kazan to break the American record by four seconds and win silver. He looked solid earlier in the meet in the 400, placing 5th, and will be a major factor here.

Heat 1 of the women’s race features Canada, Sweden and Denmark, while heat 2 has Australia, China and the Americans. All six teams are expected to be in the hunt for medals.

The men’s event will have the Australians and Brits in heat 1, and the U.S., Japan and France in heat 2.

Full relay lineups will be available closer to the beginning of the session.

Pretty impressive that Yang’s “throwing in the towel” is a 15:01.