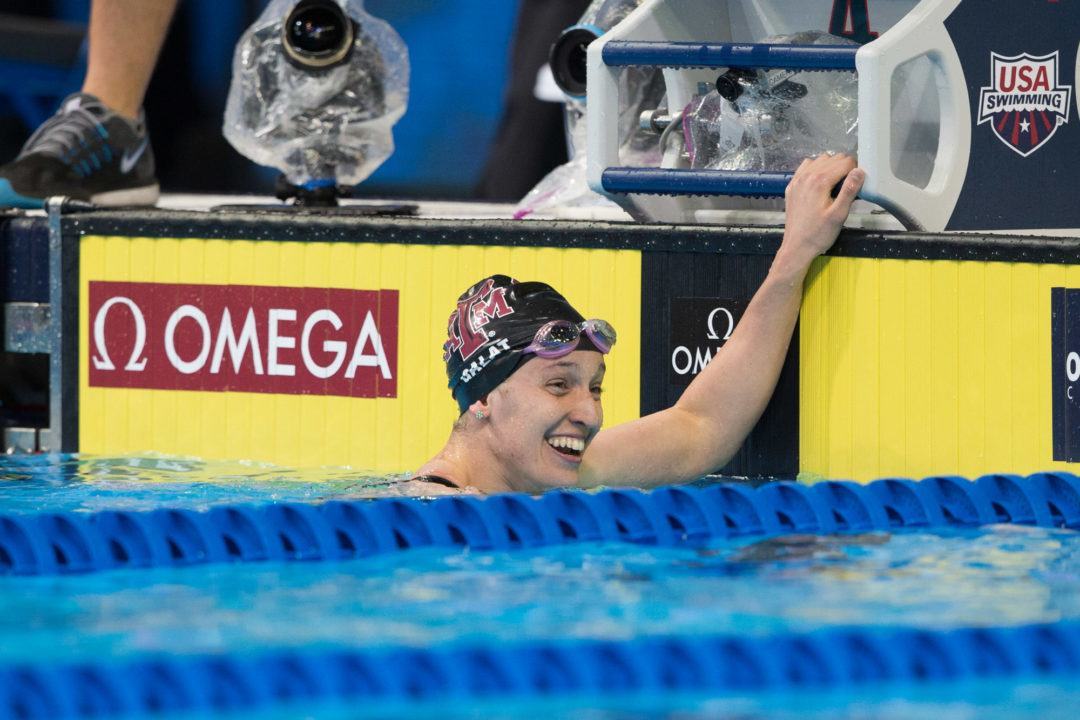 Bethany Galat had a huge summer-- she'll be a big part of the A&M women's season in her junior year with the Aggies. Archive photo via Tim Binning/TheSwimPictures.com

Watch Zhang Yufei become China’s first-ever female swimmer to get under the 53-second threshold in the 100m freestyle event.

The Texas A&M men kick off their season on October 15th with the Gulf Senior Open. After a meet with Incarnate Word in San Antonio, they’ll host two SEC rivals. First, the South Carolina Gamecocks will come to town, followed a week later by the Florida Gators.

After the winter break from competition, they’ll return to conference battle with the Auburn Tigers in their first SEC away meet of the season, then they’ll close conference competition with their dual with LSU at home.

The Aggies will then be thrown into the post-season weeks of championships. They’ll head to Knoxville for the 2017 SEC Championships, then gear up for the 2017 NCAA Champs in Indianapolis.

The Texas A&M women, coming in off of a red-hot summer, will begin their season as defending SEC Champions. Their first big test will be a double-header weekend– they’ll travel to Austin to dual with Texas on November 4th, which should be a fantastic meet, and then they’ll host a young Florida team the next day at home. Two weeks later, they’ll swim at the Art Adamson Invite for their mid-season taper meet.

After the break, the Aggies will battle another conference foe, Auburn, away. The weekend of January 13-15, they’ll compete at the Austin stop of the Arena Pro Swim Series, before hunkering down for another tough double-header weekend. On January 20th, they’ll swim against SMU, then the next day get up and race with LSU. Both of those meets are at home in College Station.

Finally, they’ll try to defend their SEC Title in Knoxville, and close out their season looking for a top three finish at the 2017 NCAA Championships, which will run from March 15-18  in Indianapolis.

Texas A&M is a bad school. I wouldn’t send anyone there, especially if they wanted to swim well. Anyone going should transfer of the can.

And you say this why?