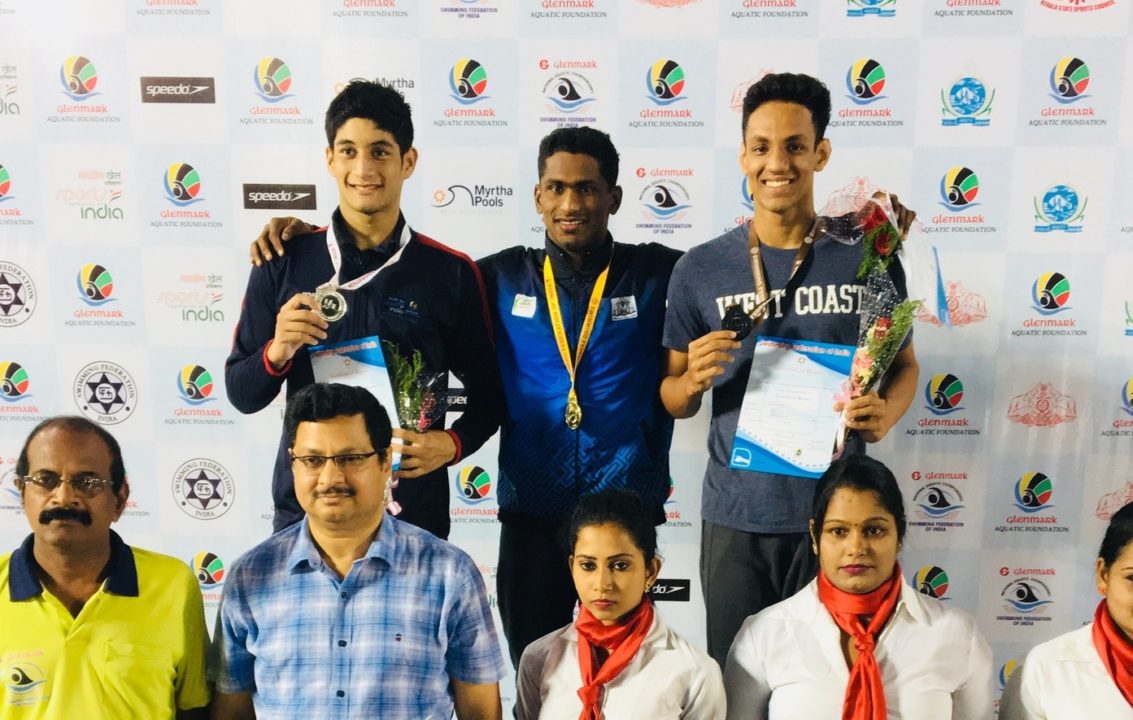 The highly competitive 400 m Freestyle for men which featured an array of stars saw local boy and Olympian Sajan Prakash create the best time by an Indian swimmer winning the gold medal with a time of 03:54.93. Current photo via Swimming Federation of India

The Japanese men’s 400 medley relay of Irie, Mura, Mizunuma, and Nakamura took down the Asian record by 0.08s, despite placing 6th in the Olympic final.

The highly competitive 400 m Freestyle for men which featured an array of stars saw local boy and Olympian Sajan Prakash create the best time by an Indian swimmer winning the gold medal with a time of 03:54.93. Sajan gained the lead in the first 25 m of the race and never let it slip, Kushagra Rawat a product of the SAI Glenmerk TIDM program representing Delhi swam flawlessly to win silver with a time of 03:58.40. Former National record holder Saurabh Sangvekar had a great start but could not manage to keep pace with Aryan Makhija of SFI who won bronze with a time of 04:01.10 while even a fast finish could not get Advait Page of Madhya Pradesh to the medal podium.

Srihari Nataraj of Karnataka once again displayed his voracious appetite of breaking records as he swum to a new best time by an Indian in the 200 m backstroke clocking 02:02.37 breaking his own national record. T. Sethu Manickavel of Tamil Nadu won silver with a time of 02:06.21 while teammate K Abbasuddin won bronze with a time of 02:09.36.

Sajan Prakash returned to the pool as the favorite and top seed in the 100 m butterfly which is Sajan’s preferred stroke. He kept his destiny to win his fourth gold with the fourth National record winning the race with a time of 00:53.46. Experienced Supriyo Mondal from Railways claimed the silver clocking 00:54.70 while Avinash Mani of Karnataka swum a fantastic last 10 meters to win bronze with a time of 00:55.89.

Gujrat’s Maana Patel who trains at the Glenmark Aquatic Foundation Mumbai returned to peak form after her injury to completely dominate the 200 m backstroke for women winning the race extremely comfortably at 02:20.42. The best swimmer for Group I at the Glenmark Junior Nationals in June Suvana C Bhaskar maintained her composure to beat top seed Soubrity Mondal of Bengal to win silver with a time of 02:25.01. Soubrity who trains at SGTIDM Delhi put behind a poor start to win bronze with a time of 02:27.60 with a late flourish.

Richa Mishra seems to have made a habit to win a gold every day of the meet. The 36 year young swimmer put up a commanding performance to win the grueling 1500 m Freestyle for women with a time of 17:41.76 narrowly missing on the National record which is at 17:39.16. The competition was for the other places and Bhavika Dugar of Tamil Nadu swum a wonderful last quarter to win silver with a time of 17:58.31 while Karnataka’s Khushi Dinesh won bronze narrowly beating Prachi Tokas of Delhi with a time of 18:03.18

Girls from team SFI was on course till the middle of the 4 X 200 m Freestyle relay to win their third relay medal when Karnataka took over showing their callibre to win the gold comfortably with a time of 09:05.55. Karnataka was represented by Smruti Mahalingam, Divya Ghosh, Damini Gowda and Khushi Dinesh. Team Tamil Nadu who were always in the reckoning and won silver with a wonderful anchor leg with a time of 09:13.67 while team SFI won bronze with a time of 09:15.55.