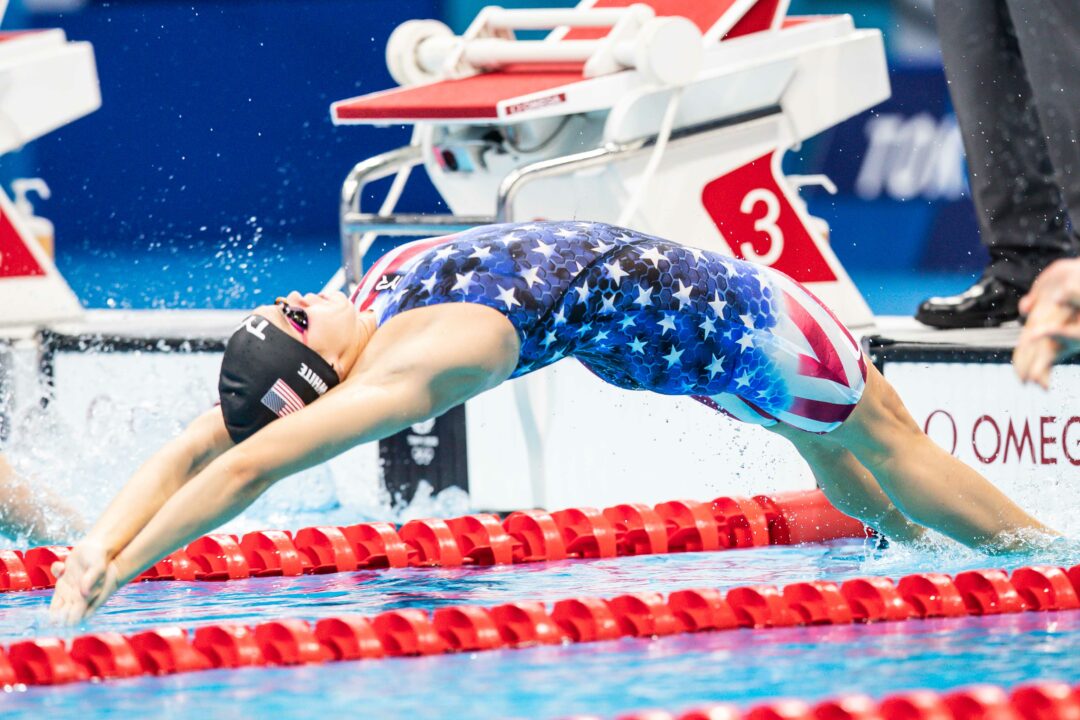 The American women exchanged three of four legs from their prelim team in the women's 200 medley relay, with Rhyan White set to lead things off on backstroke. Archive photo via Jack Spitser/Spitser Photography

Day 2 finals from the 2021 Short Course World Championships will feature the women’s 200 medley relay to kick the session off and the mixed 200 free relay to close things out.

The Americans have exchanged three of the four legs in the women’s 200 medley from the prelims, along with two in the mixed free relay, with Abbey Weitzeil coming on for both teams in the final.

The American women qualified first in the heats in 1:44.50, and bring in Rhyan White on back, Lydia Jacoby on breast and Weitzeil on free for the final. They’ll take over for prelim swimmers Katharine Berkoff, Emily Escobedo and Kate Douglass. Claire Curzan remains as the fly swimmer for finals, having produced one of three sub-25 legs in the morning at 24.87.

The second-seeded Canadians have moved Maggie MacNeil onto the fly leg after she swam free in prelims, and Kayla Sanchez, who has been red hot early on in Abu Dhabi, moves to freestyle. Kylie Masse and Sydney Pickrem remain as the first two legs.

The Italians have moved Elena di Liddo from fly to back, Silvia di Pietro from free to fly, and added Costanza Cocconcelli as their freestyle swimmer in finals.

Both the Swedes and Dutch have made significant additions, with Sweden adding Sarah Sjostrom on as the fly swimmer after she sat out in prelims, and the Netherlands bring in Kira Toussaint to swim the backstroke leg. The Swedes also add in Sophie Hansson on breast, and move Louise Hansson from back to fly, while the Dutch have switched Ranomi Kromowidjojo and Maaike de Waard from their prelim positions (Kromowidjojo now on ree, de Waard on fly).

The majority of countries have tinkered with their lineup for the final of the mixed 200 free relay, headlined by the top-seeded Russians bringing in Vladimir Morozov and Maria Kameneva after they comfortably qualified first in 1:29.84 with Daniil Markov and Rozaliya Nasretdinova.

Italy reloads with Lorenzo Zazzeri and Alessandro Miressi on the men’s side, who both sat out of the prelims, while Thom De Boer comes in for Kenzo Simons for the Netherlands.

The Americans add Ryan Held in exchange for Hunter Tapp, while Weitzeil comes in for Torri Huske on the women’s side.

The Canadians have also added both Sanchez and MacNeil on the women’s side, with Rebecca Smith and Katerine Savard moving out.