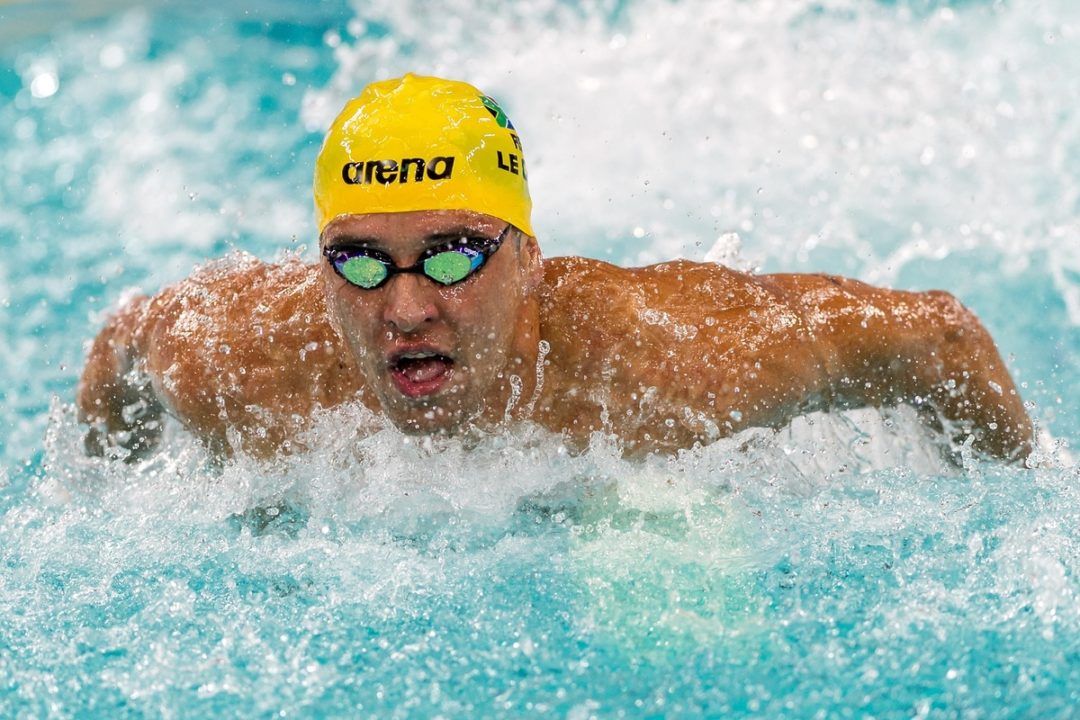 Day 1 of the fifth stop of the 2013 FINA World Cup Series will travel back to Doha, Qatar for the second time in series history.

Remember that each event winner gets $1,500, runners-up get $1,000, and third-place finishers get $500. That’s in addition to the huge series prizes available (read more about those here).

Spain’s Mireia Belmonte wasn’t close to her World Record in the first final of the 2013 World Cup in Doha, a timed final, but her easy 8:14.18 was more-than-enough to pick up gold and a big check to kick off her Doha trip (it’s good to have expenses covered in the first swim, then the rest is all gravy).

Her fellow Spaniard Melanie Costa was 2nd in 8:17.66, and France’s Coralie Balmy was 3rd in 8:18.67. She hasn’t been a best time in a freestyle race 200 meters or longer since 2009 (long course or short course) but is still making money in the sport, so its hard to be upset about it.

Katinka Hosszu didn’t have the greatest start (though she’ll come back from it later) to this meet, swimming an 8:18.71 for 4th place. She didn’t take a top three spot in the last stop in Dubai, either, though her time in this race was almost eight seconds better.

Chad le Clos picked up his first win of the series in the men’s 400 IM, a race in which he’s very good, with a 4:03.23. That beat out Hungary’s David Verraszto and his 4:03.95, despite Verraszto begin much faster than he was in his previous two wins in this race.

Le Clos hasn’t been swimming this race as often as usual in this year’s World Cup, but is pulling out some stops here in the last meet of the cluster, which should lock up a big cash prize for him.

That swim for Morozov is the early leader on the men’s side for top points performance, with a value of 936, though le Clos and Tom Shields should jump it later in the meet in the 100 fly, if history holds. This was the slowest of the times with which Morozov has won the 100 free so far, but it was in the same neighborhood as he was in the last stop in Dubai.

Swimming two events out of two opportunities thus far, Hungary’s Katinka Hosszu won the women’s 200 free with a huge last 50 split of 28.56. She was as deep as 5th in an impressive field after the first 50, but her toughness showed here. Her winning time was 1:53.53.

To the contrary, the hardest starters faded a bit. Netherlands’ Femke Heemskerk was 2nd in 1:53.65 after leading for most of the race, and France’s Camille Muffat went out very hard, but fell all the way to 5th in a 1:54.75.

Joining Hossuz and Heemskerk on the medal podium is Spain’s Melania Costa in 1:54.21, followed by France’s Charlotte Bonnet in 1:54.39. France went 4-5-6 in this race. Norwegian National Record holder in the event Cecilie Johannessen was 7th in 1:58.40.

In a race that continues to be led more by the pure sprinters than the pure breaststrokers, South Africa’s Roland Schoeman kept his perfect streak alive in the 2013 series with a 25.89 to win.

He easily took out France’s Florent Manaudou and his 26.54, and Germany’s Hendrik Feldwehr who was 3rd in 27.03.

In what has become a great battle-within-a-battle, Jamaica’s Alia Atkinson bested Russia’s Yulia Efimova in the 100 breaststroke 1:03.38-1:04.68. That’s Atkinson’s third win of this event in five tries on this year’s series.

Despite the fact that Efimova has been great in the 50 meter races (she won in the series’ last stop in Dubai), she was smoked on the first 50 meters. Atkinson turned in 29.63, whereas Efimova split a 30.70. That’s where the majority of the difference between the two ultimately came from in the race.

A tight third-place finish went to Japanese teenager Kanako Watanabe in 1:06.03. She was followed by the Netherlands’ Moniek Nijhuis (1:06.07) and Britain’s Sophie Allen (1:06.36) with the last 25 meters making all of the difference in the race.

Denmark’s Jeanette Ottesen-Gray won the women’s 100 fly in 56.74, which was her slowest time of the 2013 World Cup so far (these clusters can be pretty fatiguing, so it’s no surprise that times are trailing off a bit here in Doha – though the racing is still very good). Ottesen looked about spent by the end of her 100 fly.

Hosszu looked like she might have had more left in that race – she again swam a very heavy back-half performance, which is something she’s done a lot already in Doha. When a swimmer races as much as she does, though, there’s that opportunity to experiment with different pacing.

American Tom Shields, as he’s said in his own words, is ‘learning how to play the game’ at the World Cup, and learning the “risk/reward’ of different entries, even outside of those one might hope to swim at Worlds or the Olympics.

For the second-straight meet, he’s turned that learning into a World Cup victory in the 100 backstroke: this time touching in 50.23. That put him ahead of the fast-starting Australian Bobby Hurley, who was 2nd in 50.29, and Poland’s Radoslaw Kawecki, who was 3rd in 51.12.

Shields sat out the 200 fly this time, again playing the game of the World Cup, which left Chad le Clos and Pawel Korzeniowski to battle things out for the win.

In that battle, with how well he’s swimming, the win will go every time to le Clos, and this race was no different. He led the entire race, but really pushed the gas pedal over the last 50 meters to win in 1:50.39.

Katinka Hosszu was back in the water for first day swim number 5, out of 6 scheduled, with a 2:05.45 in the 200 IM. She’s had a few ups-and-downs in different races in this series, but the IM’s have been steady – she hasn’t yet lost either one, including World Records on the European leg of both.

This swim isn’t as fast as she was in Europe, but is her best time so far of the 2nd cluster and faster than anybody else in the world has been this year.

Britain’s Sophie Allen put in a 2:06.36, which is her best time of the new season and jumps her from 5th to 4th in this year’s world rankings, while Jamaican Alia Atkinson was 3rd in 2:07.30. Allen, impressively, was only about three-tenths slower than Atkinson on the breaststroke leg, and Hosszu came within a second of her in that split in a wire-to-wire victory.

Bobby Hurley topped South African rising middle-distance swimmer Myles Brown in the men’s 400 free by a margin of 3:39.59-3:39.98. This was a back-and-forth battle, with Brown leading most of the way, but a big last 40 meters from Hurley gave him the win.

That’s a significant outcome given that the two are both in hotly contested battles for cluster prize money. Hurley sat 3rd before the start of this meet, only 6 points ahead of countrymate Kenneth To, and Brown was only 3 points behind his countrymate Roland Schoeman for 6th, which is worth $8,000.

Denmark’s Mads Glaesner, who is back from suspension, was 3rd in 3:42.03, followed by Tunisia’s Ous Mellouli in 3;42.28. Glaesner and Mellouli are oft training partners in the United States at the Trojan Swim Club.

Dutch swimmer Ranomi Kromowidjojo continues to be on-fire in this year’s FINA World Cup. After opening the series with a World Record in Eindhoven, in front of a home crowd, she hasn’t trailed off much. Her time jumped above 24 seconds in Dubai, but she was back underneath that barrier in Doha with a 23.69 – giving her the three fastest times in the world this year.

Germany’s Dorothea Brandt took 2nd in 24.27, and Ottesen-Gray was 3rd in 24.33. Despite how tired she looked after the 100 fly, that’s actually a better time that Ottesen was in Dubai.

Great Britain’s Michael Jamieson is a serious threat to the American breaststrokers in December’s Duel in the Pool, and it already looks like 2014 will be a much better year for him than 2013 was. He showed that with a 2:05.93 to dominate the men’s 200 breaststroke, with Russia’s Mikhail Dorinov taking 2nd in 2:08.01.

That’s not close to his best time, but with virtually no competition, he easily bested this field and probably conserved some energy for the 100 on Monday.

The men’s 100 IM was the best head-to-head battle of the entire 2012 series in the World Cup, with Kenneth To and George Bovell battling back-and-forth, and this year it’s gotten even better with Florent Manaudou and Vlad Morozov joining the fun.

This race has been all about who has the hot hand. To, Bovell, and Morozov have all been 51.1’s at different points of this series, though we haven’t yet seen any of them pop and challenge Sergey Fesikov’s four-year old World Cup Record or Ryan Lochte’s year-old World Record that sit at 50.9 and 50.7, respectively.

Ukraine’s Daryna Zevina crushed the 200 back in 2:01.17, once again putting herself only about a second away from Missy Franklin’s World Record.

Japan’s Sayaka Asake is making a name for herself this year on the World Cup circuit with her great underwaters, and she took 2nd in 2:02.74.

Schoeman is now 33 years old, but with one of the world’s best starts he’s showing that he is still very much a factor in 50 meter races.

France’s Florent Manaudou, who before becoming one of the world’s best freestyle sprinters was a butterflier, sat this race out, perhaps deciding that the field was just a bit too thick to be worthy in the “risk reward” dilemma.

I hope I’m not the only one on earth to comment the live!
Not easy this afternoon. I follow swimming and a rugby match at the same time. 🙂

For fun, I can tell you she has already swum 13200m this season in world cup before Doha.

> For fun, I can tell you she has already swum 13200m this season in world cup before Doha.

I’m sure you will count the number of turns! 🙂

Let’s see if the big French contingent is ready to swim decent times.