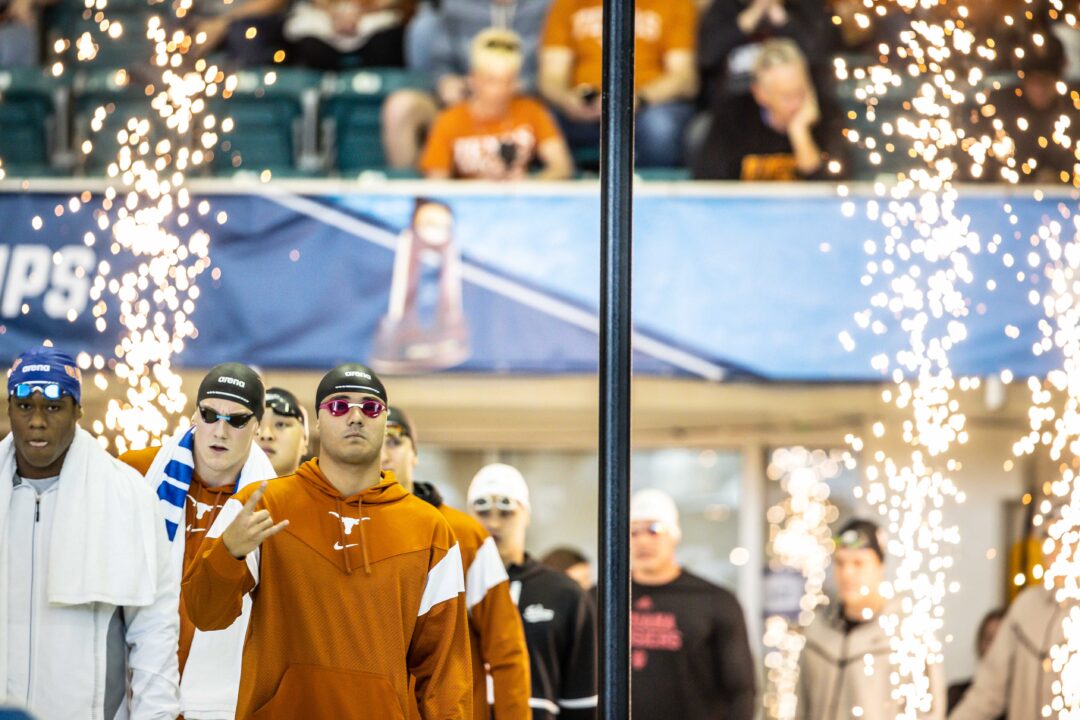 After the first full day of competition at the 2022 NCAA Division I Men's Swimming and Diving Championships, Texas sits in 1st place. Current photo via Jack Spitser/Spitser Photography

Heading into the first full day of competition at the 2022 NCAA Division I Men’s Swimming and Diving Championships, Texas (74 points) had a 10 point lead over Florida (64), with Cal just 1 point behind in 3rd (61). The Thursday finals session featured the 500 freestyle, 200 IM, 50 freestyle, 1 meter diving, and the 200 freestyle relay. Let’s take a closer look.

Cal bounced back in the 200 IM, picking up 46 points from their four swimmers in the event. After the 200 IM, the Golden Bears sat in 2nd with 107 points, and began narrowing the gap between themselves and the Longhorns. Texas still had a lead over the field with 135 points at this point of the session. The Longhorns picked up 30 points in the 200 IM. Florida was in 3rd after the 200 IM with 104 points.

In the 50 freestyle A-Final, Texas 5th year Cameron Auchinachie was disqualified for a false start, costing the Longhorns 11 points at the minimum if he placed 8th. Due to the disqualification, Texas only picked up 13 points in the event. Heading into diving, the Longhorns had 148 points to Cal’s 124. The momentum swung in Cal’s favor because of the disqualification. The Golden Bears now only faced a 24 point gap to Texas, and Cal is projected to pick up a bulk of their points later on in the meet. After the 50 freestyle, the Gators were still holding on to 3rd (119).

The top five teams remained the same through diving. Texas, Cal, Florida, NC State, and Georgia did not have any divers competing tonight.

Florida, Cal, and Texas finished 1st, 2nd, and 3rd in the 200 freestyle relay. Texas remained in 1st place at the conclusion of Day Two with 180 points. Florida ended the night in 2nd place with 159 points after picking up their 2nd relay win of the meet. Cal sits just one point behind Florida (158) heading into Day Three.

I love the graphics — and it shows Texas to be in some trouble but nothing like a Cassandra on the Walls!
Nicely done!