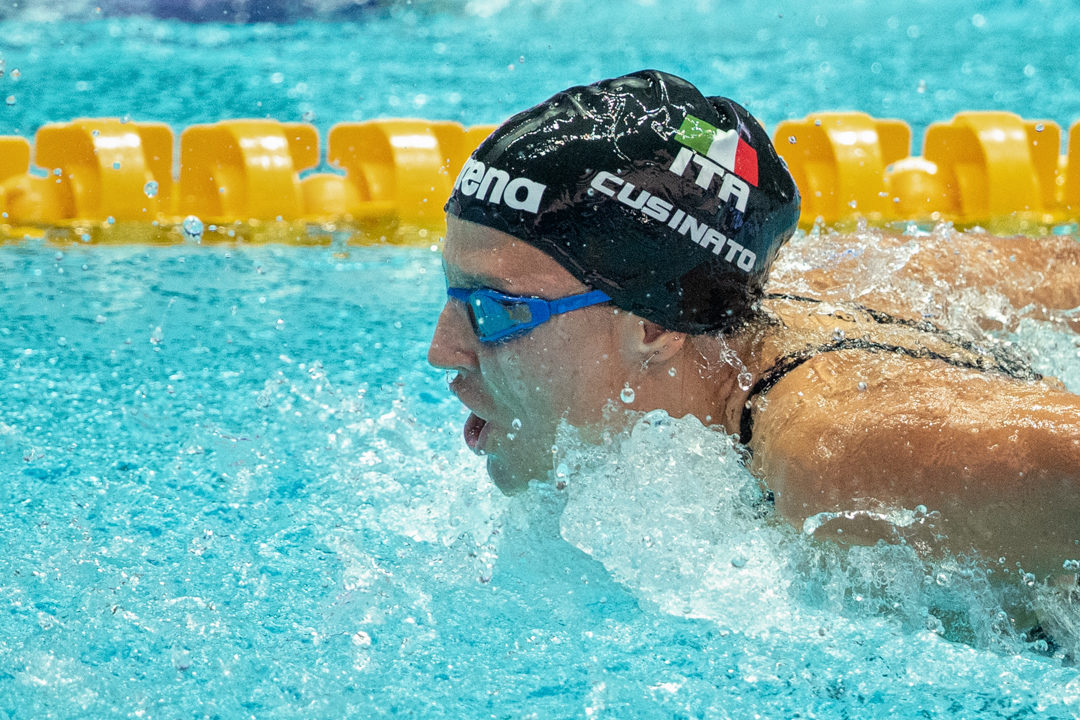 At the FINA World Cup stop in Berlin, Ilaria Cusinato went season bests in the 200 IM and 400 IM, nabbing a bronze medal in the 400 IM. Archive photo via “Rafael/Domeyko Photography”

Several new video posts have been uploaded to Shane Tusup‘s YouTube page since our last update, as the coach has taken his swimmers to their first big meets together, the FINA World Cup stops in Budapest and Berlin. This series follows Tusup’s coaching journeys with Italian record-holder Ilaria Cusinato and Hungarian teenager Zsombor Bujdoso, especially with Cusinato’s quest for Olympic glory next year. Since the beginning of their journey, Hungarian swimmers David Foldhazi and Liliana Szilagyi have joined the group.

You can view episodes 13-16 on Tusup’s YouTube page, while we’ve embedded the vlog posts below, too.

In Episode 13, we see some final preparations for the Budapest meet. We learn that this is Tusup’s first time back on the pool deck at a big meet in two years, and we see Bujodoso hang out a bit with American national team-er and vlogger Michael Andrew.

In Episode 15, the group celebrates Cusinato’s 20th birthday (October 5th). We hear from Szilagyi, who says that swimming in Hungary is a lot of tough training without a lot of payoffs, but with Tusup, she feels that it’s going to pay off. A 200 butterflier, Szilagyi is a competitor with not only Katinka Hosszu but a slew of other Hungarian standouts.

We also see their travels to Berlin, for the next FINA World Cup stop, which happened two weeks ago. Tusup runs into some issues with his deck pass, and says that he has heard from the Italian swimming federation that he needs to go to the Hungarian federation for clearance, and vice versa from the Hungarian federation. Cusinato is Italian, while the other three are Hungarian. In Berlin, FINA ultimately denies him deck access for the entire meet despite his ability to get cleared in Budapest.

We see footage in Episode 16 at the Berlin meet, but it isn’t taken by Tusup and his crew, as they’re not allowed on deck. Instead, the athletes take the reins and document the meet, and we learn that Foldhazi and Cusinato seem to be in a relationship.

Finally, Tusup talks about contrasting views of training, sport, and culture between the United States and places like Europe and Asia, saying the latter parts of the world aren’t quite as positive and open-minded to their process.

While I can’t say I am a fan of Tusup, I will admit I have enjoyed this series, and do find his process fascinating.

While I am concerned about potential injuries (especially in the gym), I do think that Cusinato will be ready to swim fast next year otherwise. Although I find an Olympic gold medal near impossible to imagine for her. In saying that, medley events are quite weak internationally at the moment, and there certainly is plenty of room behind Hosszu for a swimmer to collect minor medals.

I just skipped around and ended up right at a Shane Tusup Culture and History Lesson at the end of the lat ep.

Truly a PhD level class, glad I listened to it.

Oooh: “we learn that Foldhazi and Cusinato seem to be in a relationship.” Shane’s not going to take that so well.

He’ll probably see it as a challenge for a little bit, but around episode 23 Foldhazi is going to be asked to leave the team for “philosophical” difference

Really? If he is that obsessed with her why would he have brought him into the team in the first place knowing they might like each other? And why would he bring his gf all the way out to Italy with him if his intentions were actually to get with her? Also why would he include that bit about them being together in the episode? The logic doesn’t add up whatsoever. But you people like to create that drama in your heads for fun I guess.