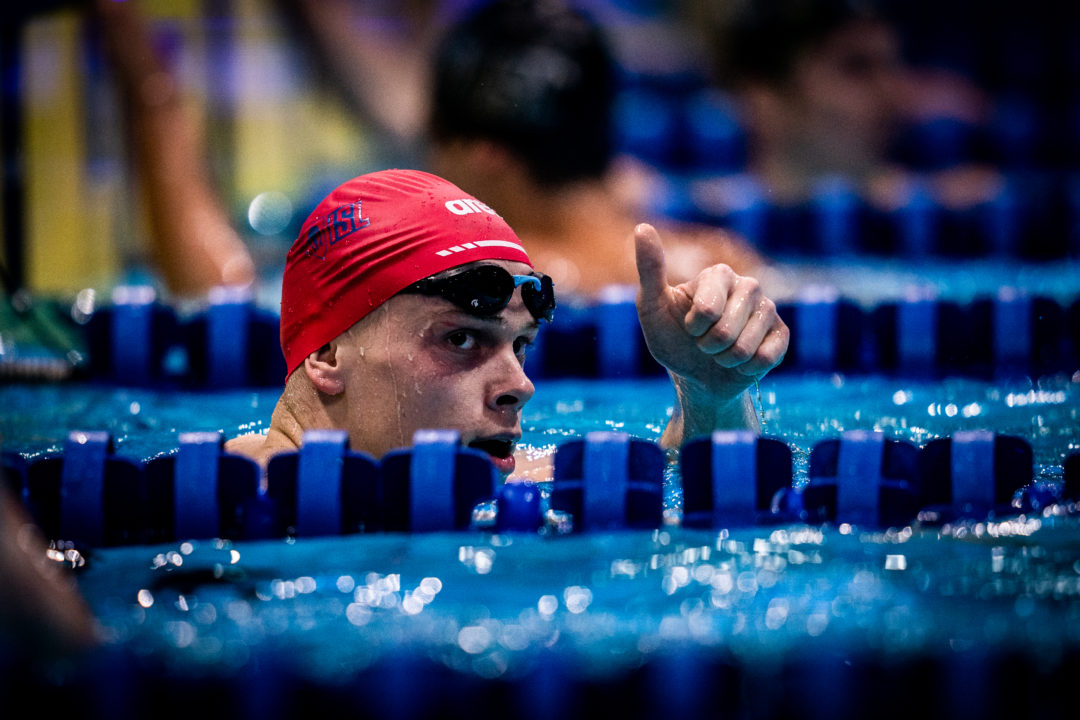 Despite Simonas Bilis' lead at the 50 mark, Danas Rapsys managed to power through and get his hand on the first in the men's 100 freestyle. Archive photo via Mine Kasapoglu

Danas Rapsys managed to out-swim Lithuanian sprinter and record holder Simonas Bilis in the 100 freestyle at the 2021 Lithuanian Winter Swimming Championships. Bilis was out quick, hitting a 23.68 opening 50 with Rapsys trailing slightly at 24.04. Rapsys powered through the back half, however, ultimately claiming the victory with a second 50 split of 25.77 compared to Bilis’ 26.45. That gave Rapsys a winning time of 49.81 and Bilis a second-place swim of 50.13. Deividas Margevičus joined the two on the podium as he hit a 50.60 for third. All three of them were a bit off Bilis’ 48.64 Lithuanian record in the event from 2016.

On the women’s side, Sylvia Statkevičius picked up her third individual win at the meet as she raced to a 58.09 victory. She was able to fend off silver and bronze medalists Marija Romanovskaja and Patricija Kondraškaite who clocked a 58.63 and 58.70, respectively. 13-year-old Statkevičius shaved a decent amount off her previous best time which was a 58.75 from December 2020. Statkevičius has been training with ESWIM in Etobicoke, Ontario for a number of years but has been in Lithuania for the last couple of months. Having been active in Ontario in the lead-up to last winter’s coronavirus lockdown, Statkevičius seems to have made the move to Lithuanian prior to the fall swim season. She raced most recently at the Lithuanian Swimming Trials in December 2020.

Yesterday’s women’s 100 breaststroke victor Kotryna Teterevkova picked up another win in the 50. Teterevkova was the only sub 32 swim, hitting a 31.76 for the win which was just a little bit off her 31.20 PB from 2019. Teterevkova was followed by Agnė Šeleikaitė who was second with a 32.93 and Aistė Slatkevičiūtė who was a 33.23.

On the men’s side, Andrius Šidlauskas and Giedrius Titenis had a breaststroke rematch following their 100 breaststroke battle yesterday. Conversely to the 100, Titenis managed to nab the victory in the 50 out-touching Šidlauskas’ 28.51 with a winning 27.73. That swim from Titenis is just 0.53 seconds off his own Lithuanian record in the event of 27.20 which he set back in 2015. The bronze medalist in tonight’s 50 breast final was Mantas Lisauskas following with a 29.71.

In the women’s 400 IM, Smiltė Plytnykaitė swam a massive best time of 5:10.30 to win the event. That’s 15 seconds faster than she has ever been in the race as her previous PB in the event was a 5:25.60 in December 2020. The long course swim was also 9 seconds faster than Plytnykaitė has ever been in the short course version of the event, having swum a 5:19.92 in January 2020. Plytnykaitė was joined on the podium by Marija Romanovskaja (5:24.08), and Gabrielė Burokaitė (5:25.84) for silver and bronze, respectively.

Glad to see bunches of links for live streaming. Will be keen to see how Rapsys does in the 200 Free too. Wonder how much they are tapered for this meet?