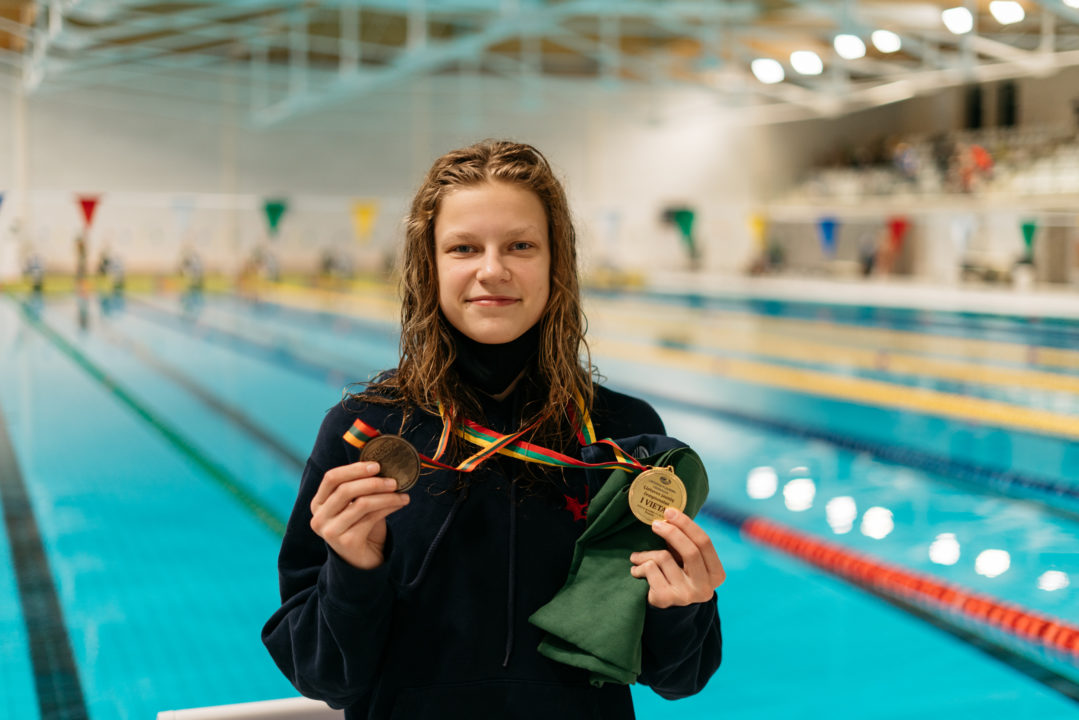 Sylvia Statkevičius opened up the 2021 Lithuanian Winter Swimming Championships with a new PB and national 14-year-old and under record in the 200 freestyle. Archive photo via Justina Butkutė & Danas Macijauskas

Sylvia Statkevičius opened up the 2021 Lithuanian Winter Swimming Championships with a new PB and national 14-year-old and under record in the women’s 200 freestyle. Statkevičius hit a 2:06.13 in the event, improving upon her 2:06.92 from December 2020. The swim was not only a new age group record, but it was also fast enough to win the event. She out-swam Patricija Kondraškaitė and Marija Romanovskaja who swam 2:08.52 for silver and 2:09.45 for bronze, respectively.

Statkevičius was back later in the session to win the women’s 800 freestyle with a 9:26.60. That was almost exactly 30 seconds faster than the silver medalist in the event Anastasija Chafizova (9:56.23) and bronze medalist Ugnė, Takusevičiūtė (9:56.34). Statkevičius was just over her personal best in the event of 9:23.99 from March of 2020.

In the men’s 100 breaststroke, Olympians Andrius Šidlauskas and Giedrius Titenis went head to head with Šidlauskas ultimately taking the narrow victory with a 1:01.05 to Titenis’ 1:01.10. Both were a bit off their best times in the event as they have both been under a minute. Šidlauskas swam a 59.12 at the 2017 World Swimming Championships and Titenis was a 58.96 at Worlds back in 2015.

The two raced the event for Lithuania at Rio 2016 with Šidlauskas earning 23rd with a 1:00.59 and Titenis placing 12th in the semis with a 59.12. The breaststroke duo will go head to head again in the 50 breaststroke on Friday and the 200 on Saturday.

On the women’s side, the current leader in the Lithuanian breaststrokes Kotryna Teterevkova threw down a 1:08.54 for the win. Teterevkova was more than a second off her best time of 1:07.34 but still managed to win the event by nearly 4 seconds as Smiltė Plytnykaitė followed in second with a 1:12.47. Agnė Šeleikaitė rounded out the top three with a 1:12.74.

Danas Rapsys decided to sit out the 100 backstroke final after finishing as the top seed in the prelims of the event. Rapsys was a decent margin off his own Lithuanian record in the event this morning, swimming a 57.22 compared to his 53.79 NR from 2017.

In Rapsys’ absence, Gytis Stankevičus raced his way to gold, hitting a 57.20 to get in just 0.40 seconds ahead of Erikas Grigaitis‘ 57.60. Danielis Kvederis made it an even tighter race for the win, coming in at a 57.96 for third place.

Is that you Dean?

Either him Blake or Townley