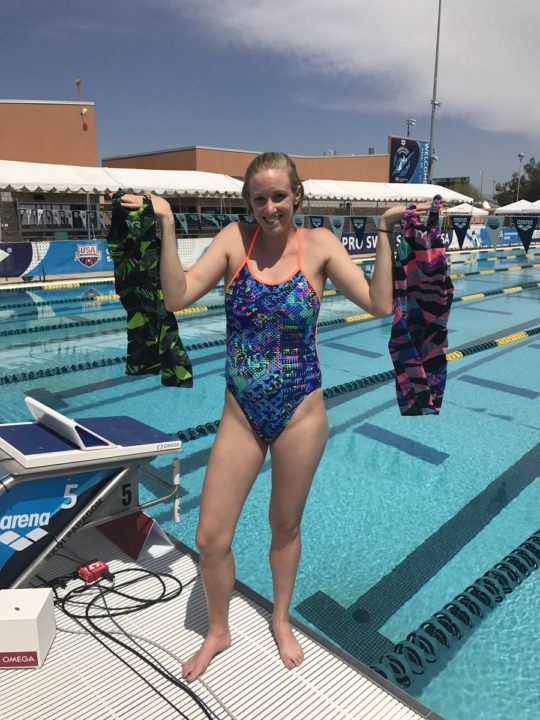 Dana Vollmer is swimming prelims of the 50 free tomorrow at the Mesa Pro Swim. She plans on announcing the sex of her baby through the color of her racing suit. Current photo via @DanaVollmer Twitter

Four-time Olympic gold medalist Dana Vollmer is making her return to the pool tomorrow, and tonight she tweeted that the color of her suit will reveal the sex of her second child. If she wears the green suit, a boy is on the way, and if she wears the pink, it will be a girl.

Girl ?or Boy ?? Any guesses? Find out tomorrow! The TYR Avictor I race in will reveal the gender! Watch live 10:30am https://t.co/o4YTUDYEYf pic.twitter.com/fL7m0fXEX2

Vollmer is 26 weeks pregnant with her second child, due in July. She is swimming the prelims of the 50 free tomorrow in Mesa, and she told ESPNW today that she will scratch finals if she makes it through.

“On the odd chance I do make it, I’m not going to swim at night,” she said. “My plan is to scratch that. There are people at this meet who have been training so hard, and maybe they’re right on the cusp of getting a cut to qualify for world trials. What if this is the meet and the race where they are going to do it? I don’t want to take that away from anyone.”

In the ESPNW interview, Vollmer also talks about her decision to train more broadly.

“t’s really just because I thought it would be fun.” she said. “I didn’t start off wanting to prove anything… I talked to a lot of other moms who compared working out to not working out and whether or not they ended up on bed rest and decided I needed to be healthier with the activity I do…. I cleared it with my doctors. It’s just something to have fun.”

Is it safe to dive and compete in a tech suit while pregnant ?

Safer than typing a silly sexist comment questioning an Olympian’s desire and smarts to continue swimming and competing.

Imagine the situation that you are an administrator of swimming meet. And there is some pregnant woman who wants to compete. Would you accept all financial responsibility in case some damage done to the health of child or mother, because of that. I doubt it because the pregnancy can be robust with a lot of reserves or can be very fragile, and you never know for sure what case you dealing with. But if you are so brave and will allow that you will get next day a mile long line of pregnant women who want terminate pregnancy in your pool and be paid for that.
You just don’t care about somebody else’s child.

There’s a thing called a liability waiver that everyone signs before they compete. Pretty sure primitive women do just fine doing all sorts of ridiculous physical feats to survive while pregnant. But you’re probably right, Dana should just stay at home in the kitchen the rest of her life. Geez.

You just confirmed with waiver remark that risk exists. Is it of the same probability as being hit by meteorite. No. Are you familiar with the anatomy of pregnant woman? You will get scared if you see such colored medical journals. Every vital internal organs are moved, pushed, squeezed. It is surprising how evolution did nothing to make female body more prepared to cary a baby. If man’s body gets just a little portion of such transformations he will die next day. I have know clue how women survive. And more stress is just what they need.
Have you ever seen children with birth defects or with abnormalities happened during first months of development? If you haven’t then leave… Read more »

TYR made her a special pregnancy race suit and she has her doctors permission. It’s safe and she’s not the first pregnant woman to race a 50 free. . ☺

Given how miserable her first pregnancy was, I’m happy for her better health situation this time around.

Is it safe for any woman to compete???? What if they swoon? Or get the vapours!!??? *places back of hand on forehead*[eye-roll emoticon]

Dana isn’t the first to swim while pregnant. Waaaaay back in 1978 at the short course nationals in Austin, 1976 Olympic gold medalist, Wendy Boglioli swam on her club team’s relay while pregnant. It didn’t cause a ripple back then and it shouldn’t in this day and age either.

Lame. All about self promotion.

Amen. Most should. Way too many American swimmers swimming well passed their prime. Most post grads need to use their college degrees and stop avoiding work and the real world.

haha you’re funny. she’s not passed her prime, she just won bronze and gold. go find yourself a life.

Oh, wow, I didn’t think you were serious . I guess people aren’t supposed to have fun? I find this interesting, were you against Phelps swimming in Rio? Tony Ervin? Dana Torres?

She’s a public figure promoting the brand that sponsors her training, supplies her livelihood while having fun. We should also be so lucky.

Dana, way back when, I know she wasn’t in Rio.

Yes, Dana Vollmer’s first Olympics was in 2004. She turns 30 this year. If she wasn’t in Rio, tho, who won the bronze medal in the Women’s 100m butterfly? And who swam the butterfly leg of USA’s gold medal winning Women’s 4x100m medley relay? Or the 3rd leg of the silver medal winning, Americas record breaking Women’s 4x100m free?

Dana is a professional swimmer. Bringing attention to herself, and, as a result, to her sponsors is how she makes a living.

‘All’ about? No. I think she’s being and excellent role model for all parents, athletes and people in general.

Which is more than I can say for you, a negative attention seeking troll.

She’s being an excellent role model because she’s wearing a suit with a specified color on it?