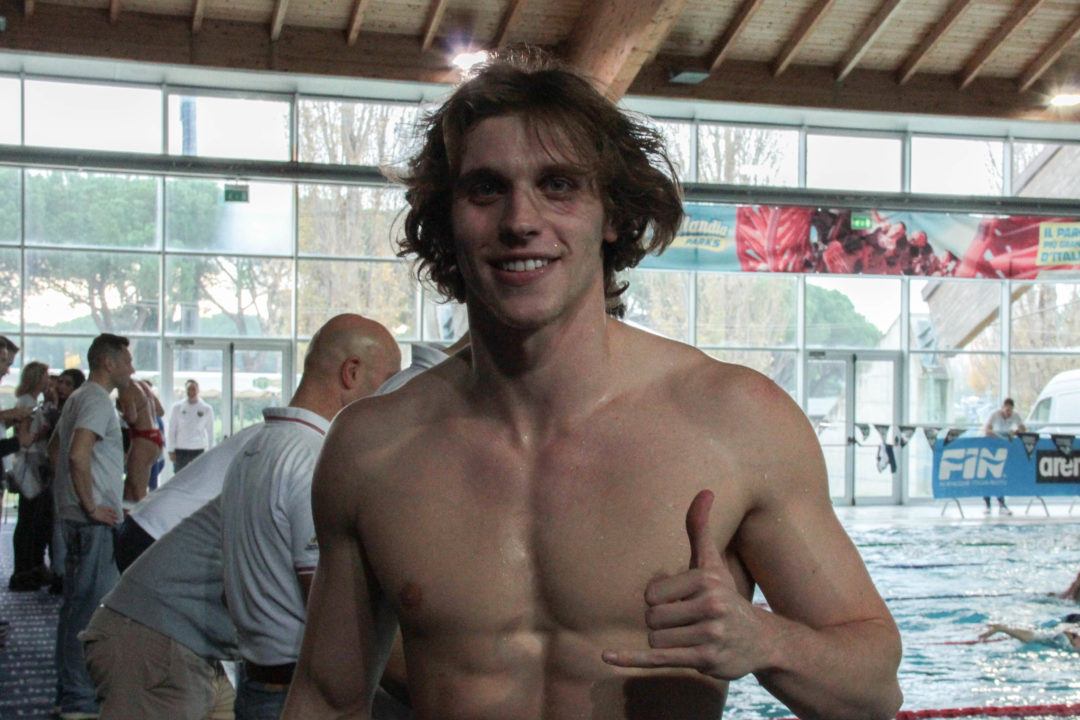 Tonight's performance as a part of Italy's National Record-breaking 4x50m freestyle relay marks Santo Condorelli's 2nd record since being cleared to compete for the nation this fall. Archive photo via Giusy Cisale swimswam.com

En route to the bronze medal this evening, the Italian men’s 4x50m freestyle relay squad clocked a new Italian National Record of 1:22.90. The foursome of Santo Condorelli, Andrea Vergani, Lorenzo Zazzeri and Alessandro Miressi combined to overtake the previous NR of 1:23.37 that’s been on the books since 2008.

Both Zazzeri and Vergani competed in the individual 50m freestyle event today as well, with the pair registering 21.35 and 21.61 in the prelims, respectively. Zazzeri’s time slotted him as 12th after prelims to grant him a spot in the semi-finals tonight, where the 24-year-old European Championships relay silver medalist ultimately touched in 21.32 for 14th.

For relaymate Condorelli, tonight marks the former American and former Canadian swimmer’s 2nd Italian record since being cleared to compete for the nation this fall. He was a member of Italy’s 4x100m freestyle relay that took 4th earlier in this competition.

This men’s 4x50m free relay wasn’t the only Italian National Record broken on the night, as mainstay Marco Orsi clocked a new mark of 51.03 to take silver in the men’s 100m IM.

He needs to move on from the Italian team and try to represent another country. That’s the record that matters. 🙂

I support him with Italy. Better he have the opportunity to swim individually and on relays, than be relegated to maybe being a relay only swimmer for the US. Similar situation to Shane Ryan. Maybe you can make the USA team eventually, but why miss your prime window on the C team going to pan-ams when you can go to worlds and medal!