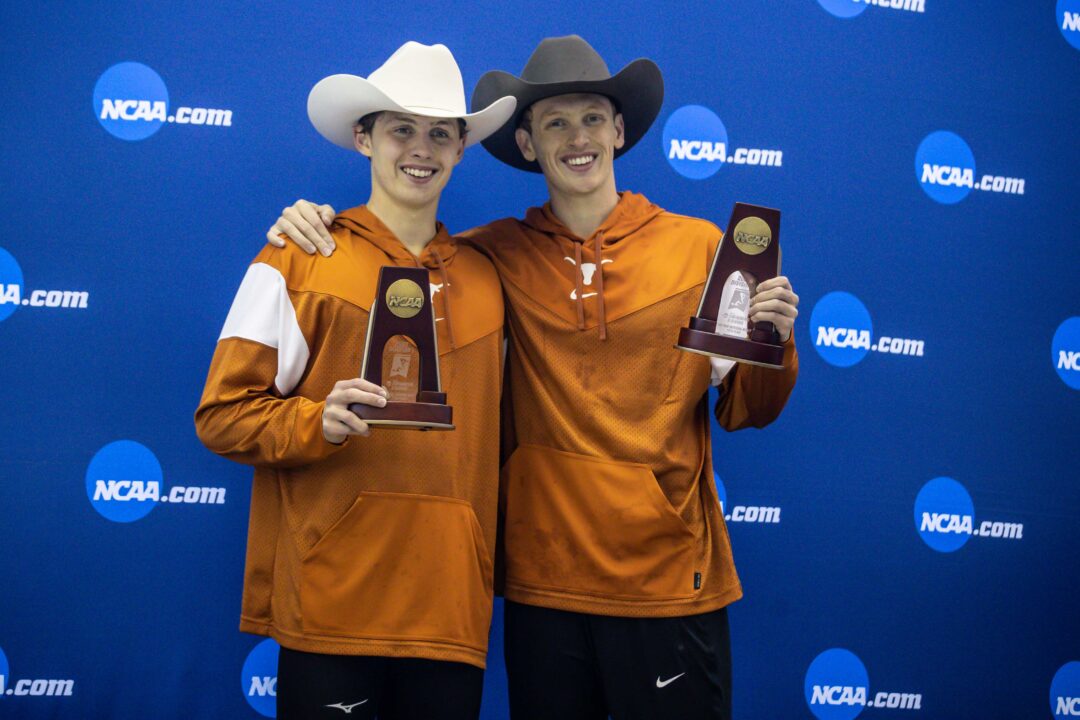 Texas will face off against NC State in what is a top-5 matchup on both the men's and women's sides. See the rest of the weekly schedule here. Archive photo via Jack Spitser/Spitser Photography

There is now less than a month away before most conference championship meets but there is still a pretty full schedule this week for dual meets.

Highlighting the week will be the dual meet against Texas and NC State. The meet is expected to be close for both genders. The Texas men were ranked #2 and the NC State men were ranked #5 in our most recent power rankings. On the women’s side, Texas was also #2 and NC State was #4. It might be pretty hard to beat the excitement from this past weekend’s Cal vs ASU meet, but expect this meet to come close especially with what is most likely a closer meet scoring-wise.

Also highlighting the week’s schedule is a dual meet against Louisville and Indiana. Louisville is coming off a win (men) and a loss (women) against Kentucky whereas Indiana is coming off of wins against Purdue.

As for Purdue, they will take on Minnesota, Northwestern, and Iowa in a Big Ten Quad meet this week. The Northwestern women are coming off of a big win over Wisconsin.

The USC women will take on two top 10 teams this week with Cal on Friday and Stanford on Saturday.

Although last week was a big rivalry week, this week also is highlighted by the rivalry between Duke and UNC as well as the tri-meet between Harvard, Yale, and Princeton.

The healthy (non mono infested) NCS men arguably have the best NCAA team for dual meets. I’ll take them in a dual meet over anyone, their depth is insane

NC State @ Texas is going to be electric!

Combined score could get exciting

But what about the equally exciting Texas vs. NCST?

I doubt it. Texas is hosting and they don’t live stream their meets. NCST did stream their meet last weekend when hosting. Longhorn Network puts all its money into football and basketball and yet both teams are average at best. For minimal money they could support swimming, one of the best sports on campus!

Wyatt Collins said on his IG story it would be

INFO/DETAILS, PLEASE, WHEN AVAILABLE!
THANKS!

It will be livestreamed go follow Texas swim on insta for details.