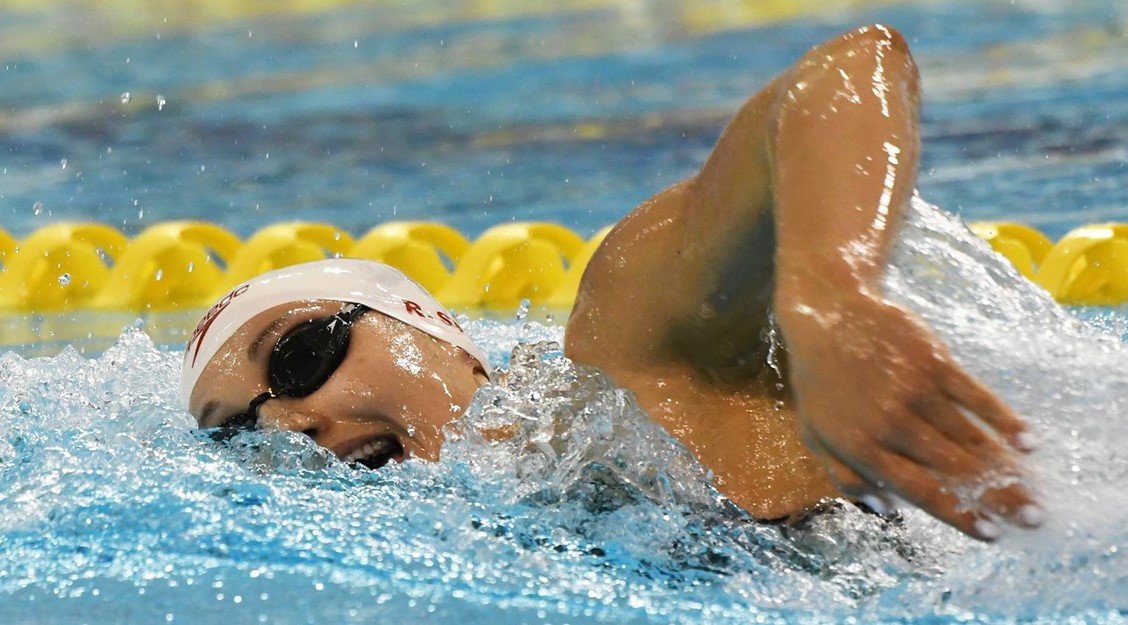 One female and one male student-athlete from each of the four U SPORTS conferences were selected to make up the Top 8. Archive photo via University of Calgary Dinos

CALGARY – Eric Lutz and Rebecca Smith of the University of Calgary Dinos have both been selected as two of the Top 8 Academic All-Canadians for the 2021-22 season, U SPORTS announced Tuesday morning.

Lutz is a recent graduate and alumnus of the Dinos track & field/cross country program, while Smith is a household name as not only a standout swimmer for the university, but an Olympic medallist for Canada.

The Dinos duo is joined by Shae Demale of Saint Mary’s, Alex Carson of Dalhousie, Jade Downie-Landry of McGill, Jean-Simon Desgagnés of Laval, Raphaël Garcia of Carleton and Kate Current of Western.

Among the nearly 5,000 student-athletes who achieved Academic All-Canadian status in 2021-22, one female and one male student-athlete from each of the four U SPORTS conferences were selected to make up the Top 8.

This marks just the fifth time in Canada West history and 14th time across all U SPORTS conferences that one conference was represented by athletes from one single university.

About this year’s honourees:

Lutz has been an important example of how high-level athletics can be married with significant involvement in one’s community. In 2021-22, he was given the Canada West and U SPORTS Student-Athlete Community Service Awards in both track and field and cross-country for his work – the second year in a row receiving both honours. He works as a child and youth care counsellor in Calgary and is a volunteer athletic coordinator for the Calgary Spartans Track and Field Club.

Lutz graduated in 2022 with a Bachelor of Social Work with Distinction, ranking in the top-10 percent of his graduating class. He is a four-time Academic All-Canadian, earning a 3.9 GPA during his degree, and in 2020 he was recognized with the ii’taa’poh’to’p Excellence Award – an award given annually to indigenous students at the University of Calgary for academic merit.

Coming out of a silver medal performance at the Tokyo Olympics in 2021, Rebecca Smith was a standout performer in U SPORTS swimming last year. She led her Calgary Dinos to the Canada West Championship in late 2021, earning first-place results in six individual and team relay events and was named the Canada West Female Swimmer of the Year. She then followed this up with a stellar national championship. Smith set a new U SPORTS record in the 200-meter butterfly and picked up three more first-place finishes in the 50-meter and 100-meter butterfly and 100-meter freestyle, as well as a silver in the 400-meter medley relay and two bronzes in the 400- and 800-meter freestyle relays. The 2019 U SPORTS Rookie of the Year for swimming and a 10-time U SPORTS champion, Smith also has four Commonwealth Games medals to her name.

This year’s elite group will be honoured on Thursday by Her Excellency at the Right Honourable Mary Simon, Governor General of Canada, at Rideau Hall in the nation’s capital.

U SPORTS proudly announced Tuesday the student-athletes selected as Top 8 Academic All-Canadians for the 2021-22 season.

Shae Demale of Saint Mary’s, Alex Carson of Dalhousie, Jade Downie-Landry of McGill, Jean-Simon Desgagnés of Laval, Raphaël Garcia of Carleton, Kate Current of Western, and Eric Lutz and Rebecca Smith of Calgary were nominated for their excellence both on and off the field of play.

Among the 4900+ student-athletes who achieved U SPORTS Academic All-Canadian status in 2021-22, one female and one male student-athlete from each of the four U SPORTS conferences were selected to make up the Top 8.

U SPORTS student-athletes achieve Academic All-Canadian status for having maintained an average of 80 per cent or better over the academic year while competing for one – or more – of their university’s varsity teams.

The elite group will be honoured on Thursday by Her Excellency the Right Honourable Mary Simon, Governor General of Canada, at Rideau Hall in the nation’s capital.