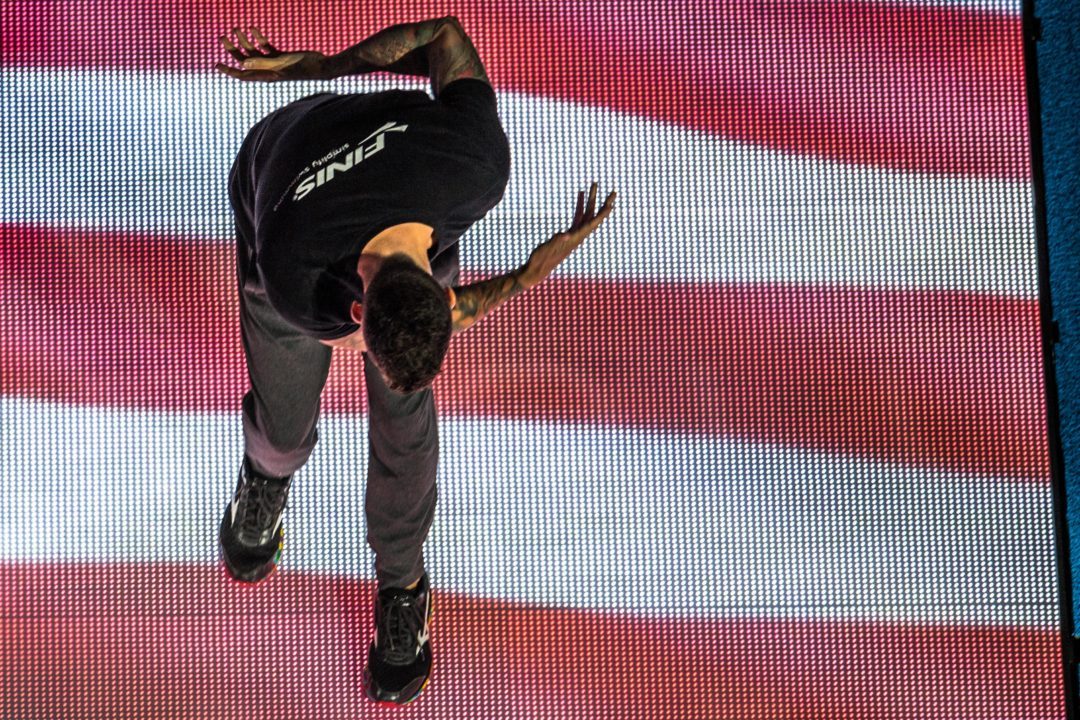 You want the electricity of something big and meaningful and full of emotional grit. And you want it once a week. Current photo via Mike Lewis/Ola Vista Photography

When you go to any big sporting event as a spectator, you want to be wowed. You want to be one of many fans in the stands screaming and cheering on your team or player (or obviously swimmer) of choice. And you may not realize it, but you want the sport itself to cater to that.

The lights, the excitement, the suspense. You want the electricity of something big and meaningful and full of emotional grit. And you want it once a week. Swimming isn’t quite there yet, but I think that day is coming closer. I asked Mel what he thought the next step closer to that goal is, and he was kind enough to share (some of) his insight.

Maybe NCAA and High School Championships should be more like Olympic Trials with light shows, flames, and/or live DJ.

Although possibly less exciting, as a swim fan, I wouldn’t mind the US having more LCM seasons, especially in Olympic and World Championship years.

In the interest of political correctness, water wrestling with bikini clad ladies, men, transgender men and transgender females. Perhaps the Princeton AD would serve as referee?

Agreed. Why else do you think boxing got so much coverage during the Muhammad Ali era? We need a bit of excitement in this sport. Seriously, look at the coverage swimming got after Lilly King showed a little finger wag!

They need to give the swim meets more of a festival type feel or a weekend long event. Like Coachella for swimmers. The triathletes have an event called Wildflower every spring and its not a championship event per se but everyone shows up and its the cool event to be at. Swimming needs to find a way to give the swimmers an event like that minus all the partying hahhahahahhaha

A big part of the excitement of a swim meet is the announcer. It’s an important role. It can make or break a meet. The announcers at trials were phenomenal. I’ve seen ( heard) great announcers at every level.but when one does a poor job (2016 winter junior nationals east for example ) it will kill the excitement and the experience.

Haha, the 2016 US juniors East announcer, he was really magic! 😆 😆
The silent announcer!
One of the best US junior meets ever in terms of quality of performances and depth but the worst announcer ever.
I doubt USA swimming hires him again in the future.
Anyway Sam Kendricks should announce all USA swimming big meets. Even when there are 2 meets at the same time. I’m pretty sure he could have announced the East meet from College Station while still announcing the West meet. 🙂

Nah, Chris Hindmarch-Watson should. If you don’t know who he is, seriously look him up Bobo! Chris did the Olympics this year and it was amazing. I’ve heard him announce at several meets from national events to Worlds/Olympics – he knows how to get the crowd going in a way that’s not fake or distracting.

With so many great pools having horrible acoustics… well let’s just say that no announcer is good enough to overcome an echo that makes them unintelligible. If you design pools that host meets, please consider this! This coach is absolutely exhausted with wondering if I heard what I thought I heard and having to walk all the way around the 50 meter pool every time I need a clarification.

Do we ever see a Pro Swim League? Take all the pro club teams (SwimMac, Tuscon Ford, Cal’s pro team, etc.) and put them in dual meets against each other throughout the year. Recognizable names, faces, and try to convey the excitement of a dual meet. This could also be a way to start to build up the stories of lesser known swimmers that are up and coming for the next Olympic Cycle.

Good idea but which current TV channel can broadcast that in USA?
It should be broadcasted on a new channel simply called “SWIMSWAM TV”! At least on the web to begin before dreaming bigger later.
We could watch US meets (NCAA, juniors, grand prix, high school championships, your idea of Pro Swim League….), international meets (world cups, Mare Nostrum meets, world junior championships….) but also diving, synchro and water polo.
A live daily show with debates, interviews and meets’ broadcasting each weekend with Mel, Braden, Lauren, Loretta, Jared and the others. Please hire my darling Ariana Kukors too. She was great for US olympic trials.
I HAVE A DREAM! That’s the next step of swimswam expansion. SWIMSWAM TV!

I am not so sure that creating the swim league is the issue. I believe the issue to be creating a product that people will pay to come out and see. Our mentality has to transition from “once every four years” to multiple times per year and we have to create a product that people will rally around. We have the stars but now we have to create the stage for these stars to shine on. The stage is what’s missing.

Didn’t Michigan start something like a pro swim league and offered money for winners? I think it had decent attendance but it never truly got off the ground.