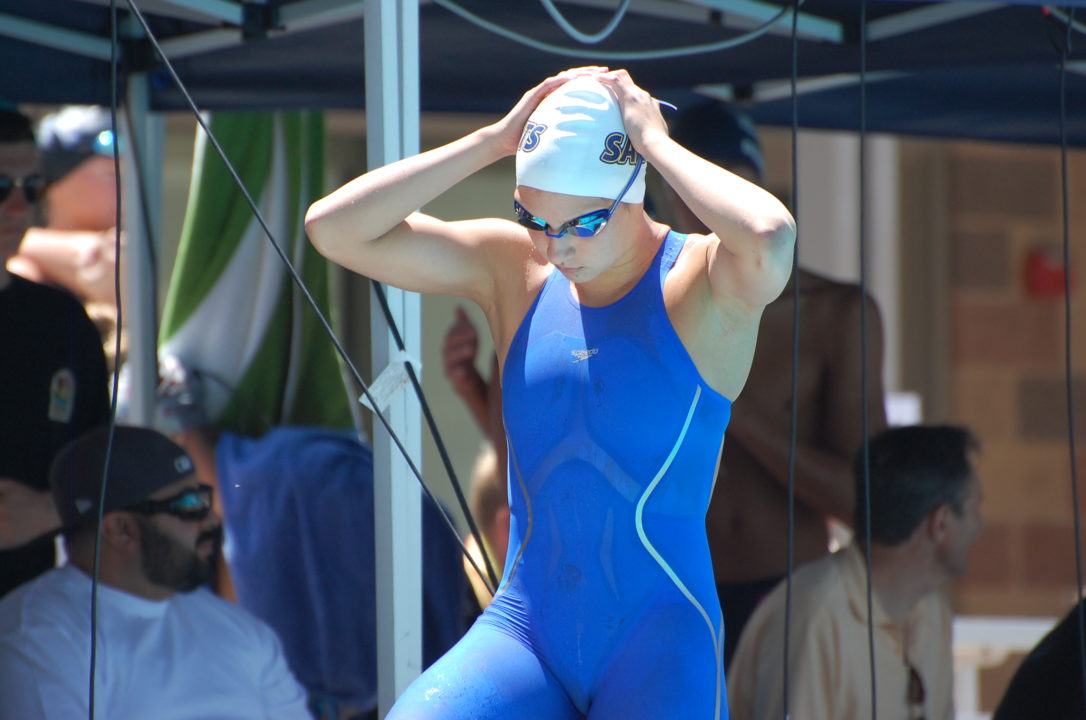 Elise Garcia had the top time in two events in the Southern Section from division 2. Archive photo via Anne Lepesant

In analyzing the consolidated results of the CIF-SS Championships, bringing together divisions 1, 2, 3 and 4, it becomes clear that the top division isn’t as dominant over the others as say, at the NCAA Championships. While the odd NCAA division 2 swimmer would be a contender at the D1 level, the California Southern Section has a swimmer from one of the lower divisions in the majority of events ranked inside the top-3.

In total, there were seven events where a lower division swimmer had the fastest time of all, and another where there was a tie with a D1 swimmer for top spot. Take a look below:

Elise Garcia of Crean Lutheran, Danny Syrkin of La Canada and Andrew Koustik of Calvary Chapel-Santa Ana all had spectacular performances at the D2 Championships to post the top times of the entire Section in both of their individual events, with Garcia tying Santa Margarita’s Anicka Delgado from D1 in the 50 free. Alexandra Crisera, who holds the top time in the 100 free, actually led off her team’s 200 free relay in a time that was faster than Garcia and Delgado at 22.59.

Isn’t divisional breakdown in most of these high school’s based on size (student population) and not really “talent”? So while it goes without saying that wealthy schools with large populations might have the most depth in a sport like swimming, it is certainly possible (if not likely) that plenty of just as fast swimmers will show up at smaller schools?

James – that’s incorrect. I don’t know the exact formula, but in effect, if, as a team, you swim really fast at a lower level, they move you up. There’s schools with 4,000 students in D4. If you win a lower division 2 years in a row, I believe they move you up. That used to be the rule, at least. Cerritos won 2 D4 titles in a row, with about 2,200 students, and have moved up to D3.

In other words – it’s different than most high school associations that those of us outside of California are used to, where classifications are based almost exclusively on student body size (with some ability to appeal up or down).

Yes, but it is not like a sport like basketball where if one player wins they all win. It is not surprising that some individuals will be faster in a lower division while the whole team is not strong enough to move up.

This is correct. League also doesn’t matter. Back in 2008 when both Keppel boy’s and girl’s team won 2 D4 titles in a row with a tad bit over 2,000 students, they got moved up. As a result, the entire league got moved up regardless of how the other teams did at CIF.

Somebody knows the nuance better than me. There’s a league component as well (Leagues move together).

Part of it is population size but Santa Margarita has girls that make nationals. So, they would not be competing against my old high school Los Amigos in Division 4 which probably had only 4 girls swim year round in its history since the late 1960’s,

It is based on school size and, as mentioned, based additionally on performance. My high school in the early 90s was div 1 for 2 years when we had 1000 students total at school. But we were a national public hs record setting team so we were bumped to Div1. By my junior year we were D2. And have moved back and forth ever since. At most we had 7 men at CIF and 5 women. IMHO it should be based on school size exclusively Bc with so many divisions in SoCal there should be a league meet, a division meet, a regional meet (CIf) then a state meet. But the state meet should be the focus. Had they had… Read more »

Agreed, but with the swim season schedule setup, its going to be impossible. Back 10 yrs ago, CIF setup a Master’s meet after the CIF Division meets that acted as the “State Meet” at that time and that was a total fail. Most of the top end swimmers didn’t show up. Most, if not all, of the top end SoCal high school swimmers train with their club, and their club coaches would not allow their swimmers to swim at the Masters Meet.

While the top end for D2 might be higher, the top 18 average time in each event is significantly faster.