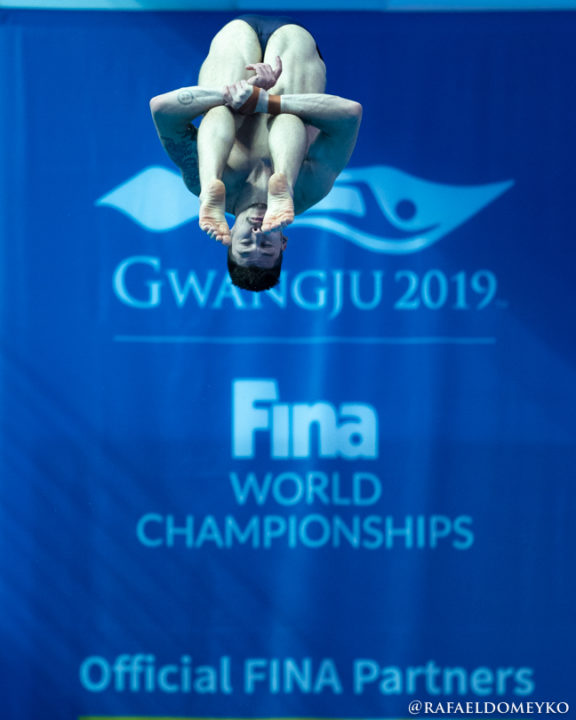 China is a perfect 5-for-5 in diving gold medals so far, almost matching their total of 8 from the 2017 World Championships already. Stock photo via “Rafael/Domeyko Photography”

China continued their major comeback tour on Sunday at the 2019 FINA World Aquatics Championships by moving to 5-for-5 in diving gold medals so far, winning 2 more events. They’ve already almost caught the 8-gold medal performance they had in 2017, which was a historically-low figure for the world’s dominant diving nation.

Peng struggled through the early rounds, including scoring just 60 points on his 2nd dive (his lowest score of the final), and didn’t have the same pop as his countrymate Wang did to make up that ground late.

Mexico’s Rommel Pachecho Marrufo took silver, in spite of having among the lowest Degree of Difficulty schedules in the field. His opening dive, a 203B, carries only a 2.3DD. Nobody else had a DD on any dive lower than 2.6.

He made up for it, though, with consistent diving through the middle rounds to land on the podium.

The Chinese women won their 10th-straight gold in women’s synchro, with the pair of Lu Wei and Zhang Jiaqi winning their first title together.

While the pair had some hiccups in execution, their synchronization scores were the highest in the field, receiving several 9.5s in that category. The pair was so dominant that they had the highest dive in every round of the competition.

Malaysia took silver with the pair of Mun Yee Leong and Pandelela Pamg combining to finish 32 points back of the Chinese, while the United States won their 2nd diving medal of the championship with the pairing of Samantha Bromberg and Katrina Young.

Just an outstanding performance by Bromberg and Young!
On the road to Tokyo – for sure!