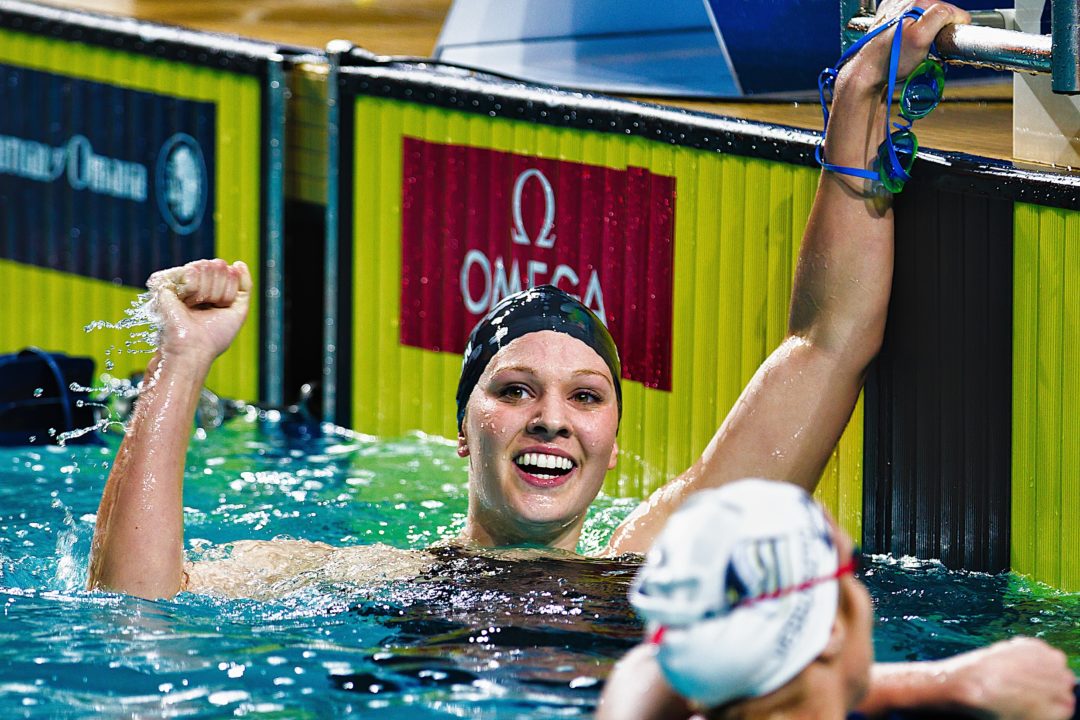 The women’s 800 freestyle was a tremendous race between Chloe Sutton and Andreina Pinto of Venezuela. At the 400 meter...

The women’s 800 freestyle was a tremendous race between Chloe Sutton and Andreina Pinto of Venezuela. At the 400 meter mark Sutton had a slight lead over Pinto turning in a time of 4:14.36. Sutton continued to hold that lead going into the last 100 when Pinto made her move taking the lead at the 750 meter mark, but the unrelenting Sutton stayed with her and eventually got her hand on the wall five one-hundreths of a second ahead of Pinto winning the event in a time of 8:25.88 followed by Pinto who posted a 8:25.93.

The two women are now ranked eighth and ninth in the world.

In the men’s 100 freestyle, a race that featured five Olympic gold medalists, Anthony Ervin used his speed to take an early and substantial lead turning at the half way point in a time of 22.93. Ervin hung on to win the event in a time of 49.14.

After the race when talking to Rowdy Gaines about that first 50 Ervin told him that he was going to, “Deal with the pain and pay for it later.” Which he did and described his final 15 meters as, “What was water became stone.”

Ricky Berens finished second in a time of 49.99 followed by Michael Klueh who finished third posting a time of 50.35.

Home town girl Kathleen Baker had an incredible race in the 200 IM, posting a lifetime best by two seconds to win the event in a time of 2:14.46. Baker lead for most of the race, but had to hold off both Annie Zhu and Brooke Zeiger, who both had great breaststroke and freestyle legs in the race.

If you thought that Kathleen Baker was impressive improving by two second to win the 200 IM, in the very next event 15 year old Kaitlin Harty out did Baker cutting four seconds off her best 200 backstroke time to win the event in a time of 2:10.83.

In the men’s 200 backstroke Ryan Murphy separated himself from the field in the final 50 meters to eventually taking the event in a time of 1:59.93. Jack Conger finished second posting a time of 2:00.25 with Ryan Lochte finishing third recording a time of 2:00.80.

Only minutes after her 200 backstroke Megan Romano took the women’s 100 freestyle posting a time of 55.24. When asked about swimming the draining backstroke race before her 100 freestyle win Romano said with a smile, “It warms me up a bit.”

Connor Jaeger collected his third win of the meet by winning the men’s 1500 freestyle in a time of 15:02.68. It was not easy as Michael McBroom pushed him through the entire race eventually finishing second posting a time of 15:03.38.

I love watching Sutton. She is a racer, no doubt about it. Reading about her clinics and how much she loves the water is inspirational. You can see it in her face. She lights up like no one else.

That time by Andreina Pinto is faster than she swam last year to become the only South American female swimmer to make an Olympic final.

Adreina Pinto is a NEW SOUTH AMERICAN record, beating her time last year of 8.26.43 in London.