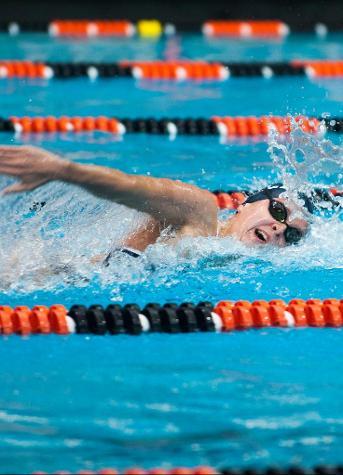 Carraro busted out a lifetime best of 1:04.68 to take gold in the women’s 100m breaststroke, shaving .05 off of her own national record of 1:04.73 set at the 2018 Short Course World Championships. You can read more about Carraro’s head-turning swim here.

Fellow Italian Nicolo Martingenghi also produced a milestone swim, winning the men’s 100m breaststroke in a time of 57.98. That time overtook the Bolzano meet record and represented the only outing under the 58-second threshold tonight.

Runner-up in the race was teammate Fabio Scozzoli, who touched in 58.56 while visiting Brazilian Felipe Franca da Silva wrangled up bronze in 58.94.

The race was much closer on the men’s end, with multi-Youth Olympic Games swimmer Thomas Ceccon topping the podium in a mark of 51.89 to Piero Codia‘s 51.97. Ceccon collected 2 golds last night, taking the 50m fly and 100m IM.

British swimmer Isabella Hindley also earned another gold, taking the women’s 50m back in a time of 28.21. The men’s race saw Brazil’s Guilherme Guido bust out a winning effort of 23.54, a time that represents a new meet record.

Hindley brought her meet gold medal count to 4 with a victory in the 50m free, hitting the wall in a time of 24.95. American Madison Kennedy was runner-up in 25.07.

Federico Bocchia was too quick for the men’s splash n’ dash competition, taking the 50m free title in 21.65, the only sub-22 second time of the field.