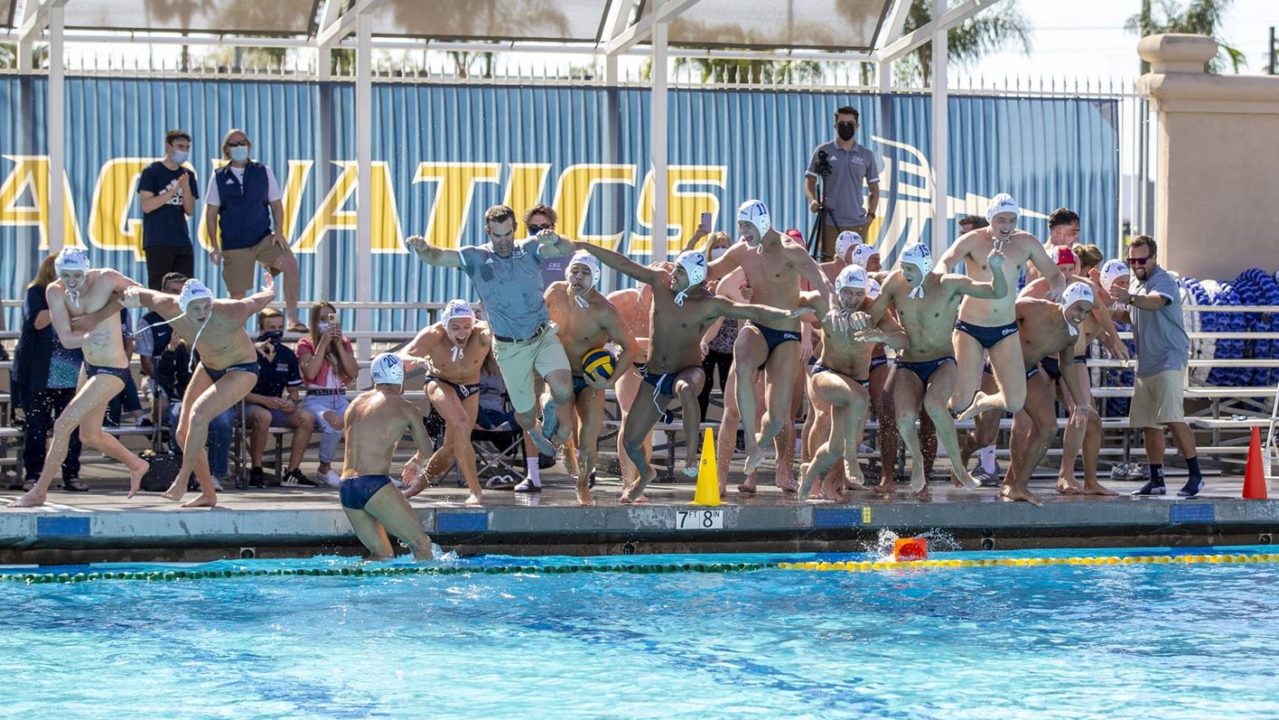 The Lancers defeated top-seeded and eighth-ranked Air Force, 11-9, to win their first conference title and the automatic berth to the NCAA Championships. Current photo via Danielle Lutjens / CBU Athletics

No. 6 Cal Completes Weekend Sweep of No. 4 ASU In Women’s Water Polo Action

Junior Elli Protopapas scored a clinching goal in the final minutes as the Bears completed a season-defining weekend sweep of ASU with a 5-3 victory at home.

The Bulldogs kept things close in the first, but the Kingsmen built too big of a lead in the second and third quarters, resulting in a 9-16 Bulldog loss.

RIVERSIDE – After qualifying for its first Western Water Polo Association Championship game, California Baptist University men’s water polo was hungry for more history. The Lancers made it when they defeated top-seeded and eighth-ranked Air Force, 11-9, to win their first conference title and the automatic berth to the NCAA Championships.

It makes CBU men’s water polo the first program to qualify for the NCAA Championships in the Division I era.

“This is a great, exhilarating experience,” Coach Kevin Rosa said after celebrating with his team in the pool after Saturday’s game. “This is what you think about at the start of the season. The best celebration in sports is right here. Everyone loves taking a bath at the end of the season, that’s always a good way to finish, and we just earned ourselves a little bit more season.”

Everything seemed to click for CBU at the WWPA Championships, as it played its defense of the season and was just as strong on offense this week. The Lancers scored on 44 percent of their shots (11-25) on Saturday and held the Falcons to a 32.1 percentage (9-28). CBU improves to 7-4 on the year, while Air Force’s season comes to an end with a mirrored 4-7 record.

“It was defense this week, they put in the effort on the defensive end of the pool,” Rosa said of the key to victory. “The team did everything they could on defense. They had great energy and played for each other, instead of saving energy for offense. We knew if we held them to less than 10 goals we could win.”

As has been the case all year, CBU was led by its senior trio of Gabe Thorne, PJ McDonough and Zach Lowery. All three earned All-WWPA First-Team honors for their performance in the season and at the conference tournament.

Thorne anchored the defense all year and finished with nine saves and two steals on Saturday to earn the WWPA Player of the Year award. McDonough and Lowery each had hat tricks to lead the Lancers’ offense on Saturday, with Lowery doing most of his damage in the first half and McDonough stepping it up in the third and fourth quarters.

“They mean everything to this team,” Rosa said of his senior trio. “It’s not only what they do in the pool, but behind the scenes they’re our captains and our leaders. I am maybe happiest for them.”

It was a total team effort once again on Saturday, though, as six different players scored in the game. True freshman Matt Olsen scored two goals from center, while fellow freshman Caleb Teraoka and junior Hunter Barnett each had a goal, assist and steal. Riley Bumgardner matched Lowery with a team-high two assists.

“We have to thank [CBU President] Dr. Ronald L. Ellis, [Vice President] Kent Dacus, [Director of Athletics] Ron Prettyman, and [Assistant Athletic Director] Joey Logan for giving us the opportunity to play. A lot of universities didn’t have that option, so we have to thank them,” Rosa said. “We have to thank our athletic training staff, Tim Clark and Rachel Scheid, and our strength and conditioning coach Jason Quan and my Assistant Coach Casey Greenawalt. We obviously could not have done this without all of them.”

PLAY-BY-PLAY
Unlike the WWPA semifinals, CBU found itself down for a moment on Saturday. Teraoka opened the scoring a minute in for the Lancers, but the Falcons ended the first quarter on a 3-1 run to take a 3-2 lead into the second quarter.

Barnett’s goal a minute and a half into the third quarter pushed CBU’s lead to three, 7-4. Air Force scored two straight to cut within a goal, 7-6, at the 5:14 mark of the third.

McDonough halted all of the Falcons’ momentum with back-to-back goals. He scored 20 seconds after Air Force made it a one-goal game and added his second goal of the game 40 seconds after that to make it 9-6.

The Lancers extended their lead to a game-high five goals with the final goal of the third quarter and the first of the fourth, thanks to Olsen and McDonough, respectively. It gave McDonough his hat trick and CBU an 11-6 lead with 6:10 to play.

Air Force managed three goals over the final six minutes, but it was not enough to ever feel a comeback was imminent.

CONFERENCE HONORS
CBU produced three All-WWPA First-Teamers for the first time in program history in 2021. Thorne earned the conference’s Player of the Year award, while McDonough and Lowery were named to the league’s first team, as well.

Thorne becomes the first Lancer to secure the WWPA Player of the Year award and it stands as his third all-conference honor.  He led the conference in saves (103), save percentage (52.6), goals-against average (10.50) and ranked sixth in steals (11) this season.

They were the first all-conference awards for McDonough and Lowery. McDonough, who earned 2019 WWPA All-Tournament recognition, secured the distinction after leading the league in goals scored by six, with 39 overall this season. He also ranked second in points (47) and field blocks (six).

UP NEXT
The NCAA Championship bracket and seedings will be released on Sunday, March 7, via a press release from the NCAA. The NCAA Men’s Water Polo Championship runs from March 18-21 at the Uytengsu Aquatics Center in Los Angeles.

RIVERSIDE, Calif. – California Baptist used a big second quarter to defeat Air Force, 11-9, in the Western Water Polo Association championship game, Saturday, March 6, at the Lancer Aquatics Center in Riverside, Calif. CBU advances to the NCAA Tournament. Air Force’s season comes to an end with a 4-7 overall record. The Falcons played in the WWPA championship game for the first time since the 2012 season.

The teams traded goals in the first quarter with the Falcons holding a 3-2 lead on goals by Sam Fuller, Garrett Snyder and Alex Hirjoi. CBU tied the game early in the second quarter and proceeded to outscore the Falcons, 4-1, for a 6-4 lead at the half.

Early in the fourth quarter, the Lancers killed an Air Force power play and then scored on one of their own for an 11-6 lead just 40 seconds into the fourth quarter. Air Force rallied with the next three goals, but ran out of time. Jason Hires scored twice and Snyder netted his third of the game with 55 seconds left.

At the conclusion of the tournament, Snyder, Hires and Campbell Harris were all named to the all-WWPA team.  Snyder led the Falcons this season with 33 goals and 50 points and was among the national leaders in both categories. He led the league in points and sprint victories (31) and was second in the WWPA in goals. Harris was second on the team and sixth in the league with 24 goals. Hires ranked third in the league in field blocks (5) and fourth in steals (13) while posting 12 points (7-5-12).