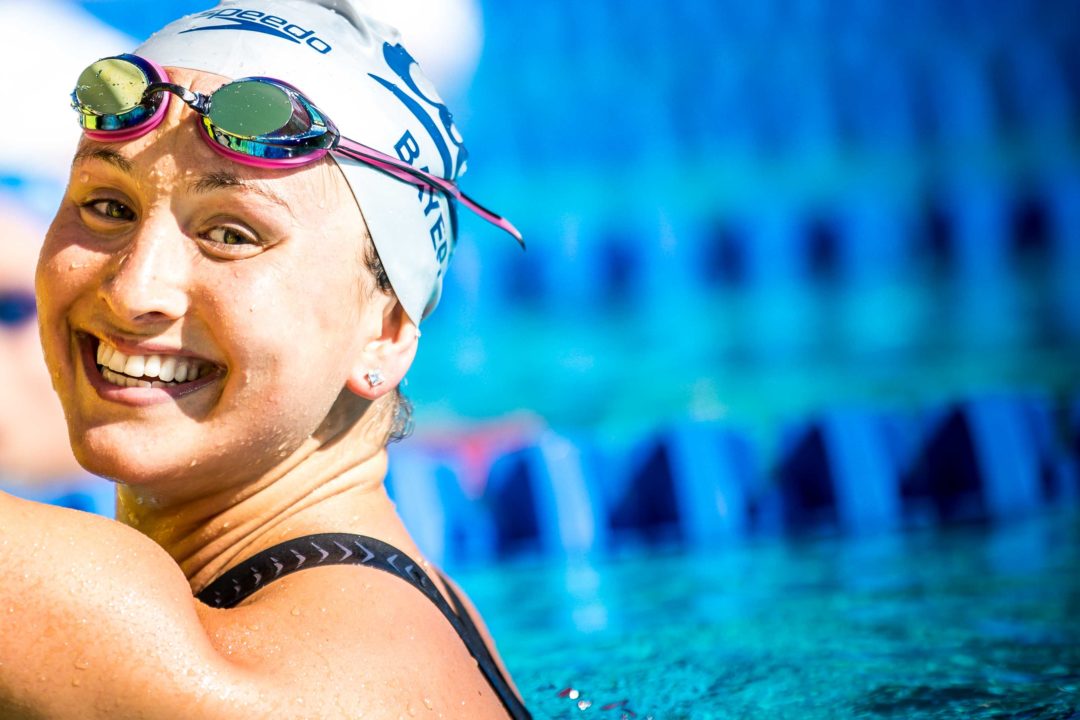 2016 U.S. Olympic Trials finalist Cassidy Bayer won't race for Tennessee this season, but is still hoping to return to competition at some point. Archive photo via Jack Spitser/Spitser Photography

Former U.S. National Team member and 2016 U.S. Olympic Trials finalist Cassidy Bayer is still working her way back to collegiate swimming – but not this season.

Bayer, who is still on Tennessee’s roster, told SwimSwam on Friday that she is planning to return to competition, if her body allows it, but not this season.

Bayer says that she was not cleared to swim this semester, so she has been training with the local Masters swim team in Knoxville. She is hoping to be back with the team in May of 2022.

Bayer began her college career at Cal in the 2018-2019 season. After a season-and-a-half with the Golden Bears, which included placing 15th at the 2019 NCAA Championships, Bayer announced that she was planning to take a break from swimming to focus on treating an eating disorder.

In October of 2020, she announced that she had plans to transfer, and eventually turned up in January 2021 to race two dual meets with the Tennessee Volunteers – although both were in exhibition competition only, and none where in her specialty butterfly events.

Bayer’s potential at a young age, making an Olympic Trials semifinal at just 16 years old, has left a lot of interest in her potential as a swimmer. She was the #5 recruit in the high school class of 2018 and a four-time state champion in the 200 IM in high school.

Bayer has used that platform to draw attention and awareness for eating disorders, which she says she has struggled with. She frequently posts on her Instagram channel about her own recovery.

Tennessee lists her as a redshirt junior, meaning she would have either one or two seasons of eligibility remaining if she rejoined the varsity squad at Tennessee.

Bayer is majoring in Communication Studies with a minor in Journalism and Electronic Media.

Wishing her all the best…in and out of the pool.

Good for her, what a fighter. But geez, our sport sure causes/exacerbates a lot of mental illnesses.

Lot of time spent in your own head…

She also would’ve made the team if Camille Adams’s DQ in the heats (or semis?) wasn’t overturned. Granted, the DQ was kind of bogus, so the right call was made, but still interesting

I remember her being out super fast. I think she was probably super amped (understandably) and would have made the team if she’d been a touch more controlled. Incredible potential.

When you say “the DQ was kind of bogus, so the right call was made”…I’m not sure you really know exactly what happened there…and that moment (if handled correctly) may have shape Bayer’s life dramatically differently than what has happened

Adams was called for a stroke infraction, but video of the turn underwater showed that it was clearly the wrong call, and it was overturned. Not sure what the issue is here.

Did it show that, though? You have access to that?

Eating disorders are no joke, especially in this sport. Cassidy, if you’re reading this, you’re a huge inspiration, and I want nothing more than for you to succeed!

136
-4
Reply
VASWAMMER
Reply to  Slower Than You

Agree wholeheartedly. Cassidy you are so brave and an inspiration to all young swimmers going through the same struggles. Wishing you all the best moving forward.

Regarding the comment above as to why the sport of swimming exacerbates these types of struggles there are many factors. One is weight gain depending on body type can significantly impact body positioning and results in the water. Another is training and being on deck and in locker rooms everyday in a bathing suit with body types different than yours. This is exacerbated by needing to squeeze into knee skins for taper meets. One starts to see themselves as less than due to their body type and it often spirals from there.