Carmel Girls Make it 27 Straight in Indiana; With Youth On Board, 30 Is Within Reach 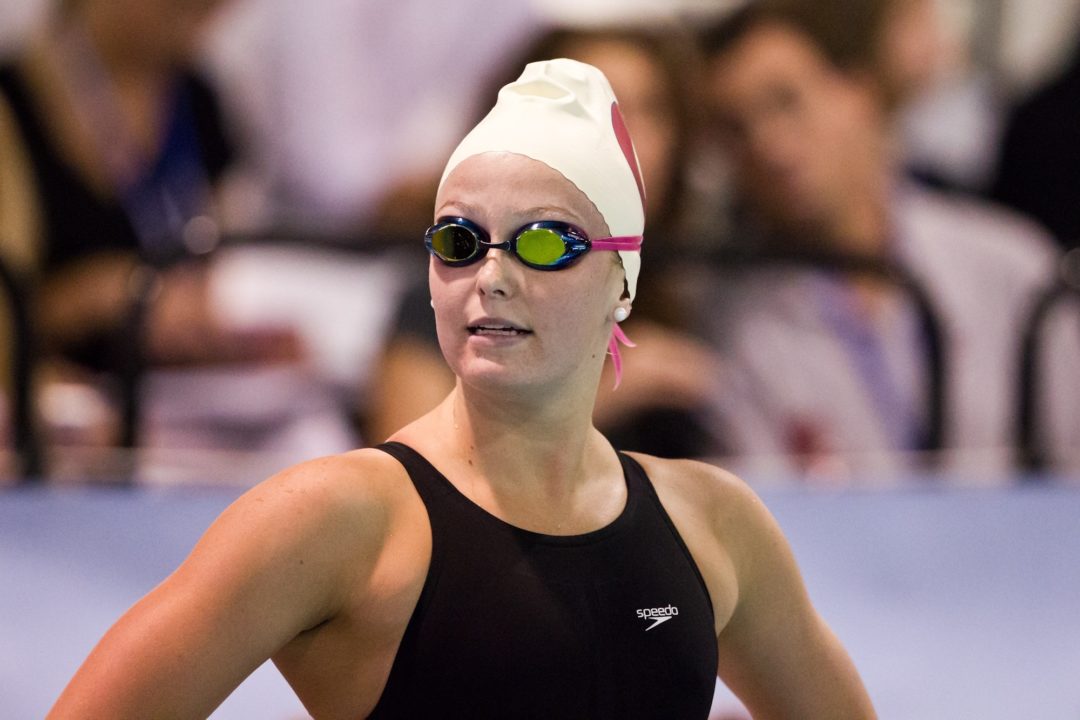 The Carmel girls triumphed this Saturday at the Indiana State High School Championships to take their 27th straight win. Carmel finished with 397 points which doubled their second place competitors, Penn high school who finished with 189 points.

Domination does not even describe how good the Carmel girls were this weekend. The girls walked away with a win in seven out of eleven swimming events including the three relays. In the first of the three relays (the 200 medley relay) Carmel set a new state record of 1:41.17. That just missed, by .16, the National Public School Record in the event. Penn finished second, far back in 1:44.20.

Adams finished with not only two relay wins but two individual wins and two state records. Adams clinched the 200 freestyle with a 1:49.25, which was over a second slower than her 1:48.19 prelim time. Western sophomore Summer Brown finished just behind Adams in 1:49.30. Towards the end of the meet, the young Adams set a state record in the 100 backstroke, taking out fellow teammate Carmel sophomore Hanna House 53.40 to 54.11. In fact, Carmel, as if to punctuate the title at the end of the meet, went 1-2-3 with Northwestern-bound senior Lacey Locke finishing 3rd in 54.68.

Sophomore Bethany Galat swimming out of Penn High School left the meet with two individual wins and the only wins for her school in the 200 IM and 100 breaststroke. In the 200 IM she defeated her teammate, senior Addisynn Bursch 1:59.06 to 2:00.99. Both girls were well off the state record of 1:56.87. In the 100 breaststroke Galat was just off the state record of 1:00.12 finishing short in 1:00.29. Evansville junior Lillia King finished a distant second in 1:01.54.

In the 50 freestyle it was all about Alex Cleveland. The Zionsville sophomore again fell short of the state record of 22.90. Cleveland swam a 22.95 in prelims but slowed down in finals, as we often see in big high school meets in the sprint freestyles, to a 22.99. Finishing behind Cleveland was Mount Vernon junior Clara Baggett in 23.26.  Baggett was unable to take the top spot on the podium in the 100 freestyle as well, falling behind Veronica Burchill. Burchill took her only individual win of the meet in a time of 50.29. With three relay wins including two state records, Burchill left the meet with four victories.

Carmel senior Ariana Bullard was able to pull off the 100 fly win over teammate Hanna House who also came second 53.90 to 54.62.  Bullard fell approximately half a second short of the state record, but there’s promise for Hanna House who has one more year to achieve it.

Senior Brittney Walters swimming out of Northridge secured a win in the 500 freestyle after an intense battle with Fishers junior Emily Moser. Walters finished in 4:53.49 to 4:54.39. Moser’s finish predicts future success for the next few years, being the only junior in the top eight.

The meet turned out to be a true success, resulting in three state records. That Carmel team is loaded with freshman, so don’t expect this streak to stop anywhere near short of the magical (if arbitrary) 30-straight mark.

Carmel had a great meet…they are loaded! Is there a better HS meet in the US?

Some of the HS Section meets in California aren’t too bad. The North Coast Section covers approximately 170 schools and gets some pretty good performances. Here’s a link: http://www.cifncs.org.