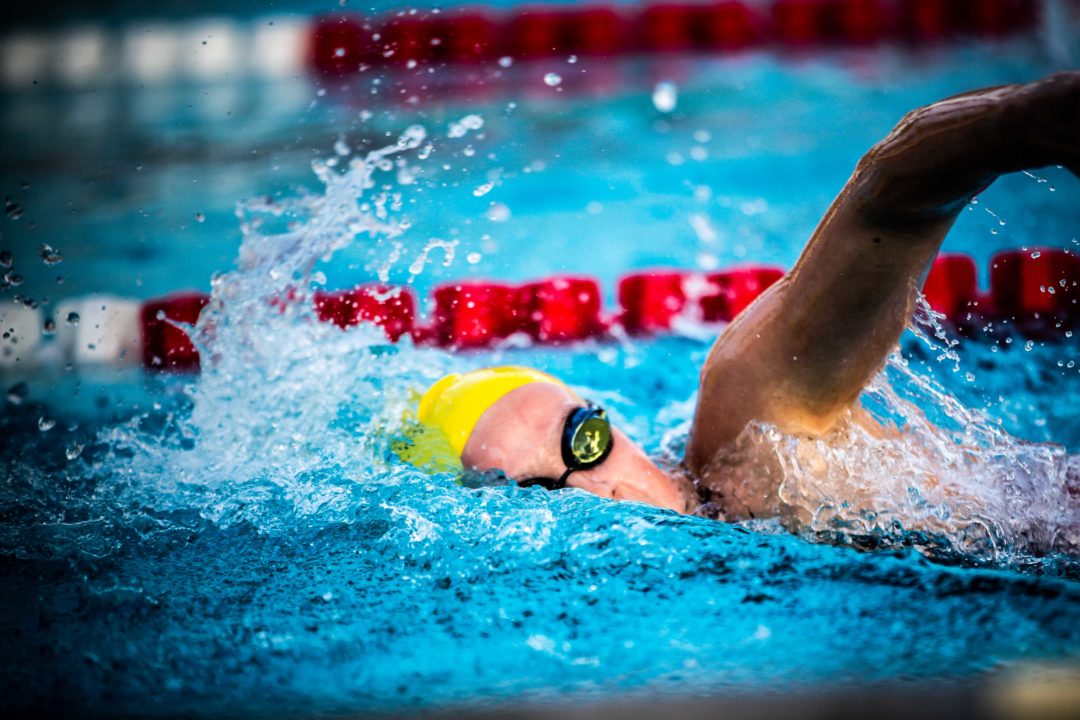 16-year-old Abby Dunford needed to drop 9 seconds from her lifetime best 1500 free time to earn the FINA 'A' cut - she dropped 18 seconds instead. Archive photo via Jack Spitser/Spitser Photography

Two-time Olympian Kylie Masse obliterated the 50 back FINA ‘A’ cut with a Canadian record time of 27.18 to add to her potential World Championships events. Ingrid Wilm joined her under the ‘A’ cut in second place, but 50 stroke races are not selection events for Worlds at this meet so her spot is not guaranteed.

While Olympic medalist Maggie MacNeil and Katerine Savard both broke the FINA ‘A’ cut in the 100 fly to earn spots on the roster, MacNeil has said she will not be racing at this year’s World Championships. She told CBC the decision was to prioritize her mental health.

19-year-old Josh Liendo broke his own Canadian record in the 100 fly by half-a-second to add his name to the projected World Championship roster. His 50.88 was the second-fastest 100 LCM butterfly of the year, behind Japan’s Naoki Mizunuma who swam a 50.86 this season. Finlay Knox also cracked the ‘A’ cut in second place to add to his potential World Championships events.

16-year-old Abby Dunford, who trains with the Sandpipers of Nevada, achieved the final FINA ‘A’ cut of the night with her win in the 1500 free. She needed to drop 9 seconds from her lifetime best time to break the ‘A’ cut – she dropped 18 seconds instead. Worlds will be her first international meet representing Team Canada.

While no one achieved FINA ‘A’ cuts in the men’s 800 free or 50 back, Eric Brown broke the ‘B’ cut while winning the 800 free and is eligible for the World Championships roster under priority 3. 17-year-old 50 back champion Loic Courville Fortin also cracked the ‘B’ cut, but his spot is not guaranteed since 50 stroke events are not qualification races at this meet.

Kylie Masse broke the Canadian record, not the world record.

Maggie’s eligible and said she’d compete at Commonwealth Games if selected for 100 fly.

Acevedo is qualified in the 100m back because his time is less than the a standard plus one percent.

Great for Abby – that Sandpiper Team seems to be a great incubator for women’s distance swimming.

Is Eric Brown qualified? He didn’t make the A Cut…

Abby Dunford came so close at olympic trials.Nailed this one.My favourite race of trials so far..seems like a hard worker and good competitor.

MacNeil still qualified for both meets and is swimming 100 fly at commonwealth games. She should be included