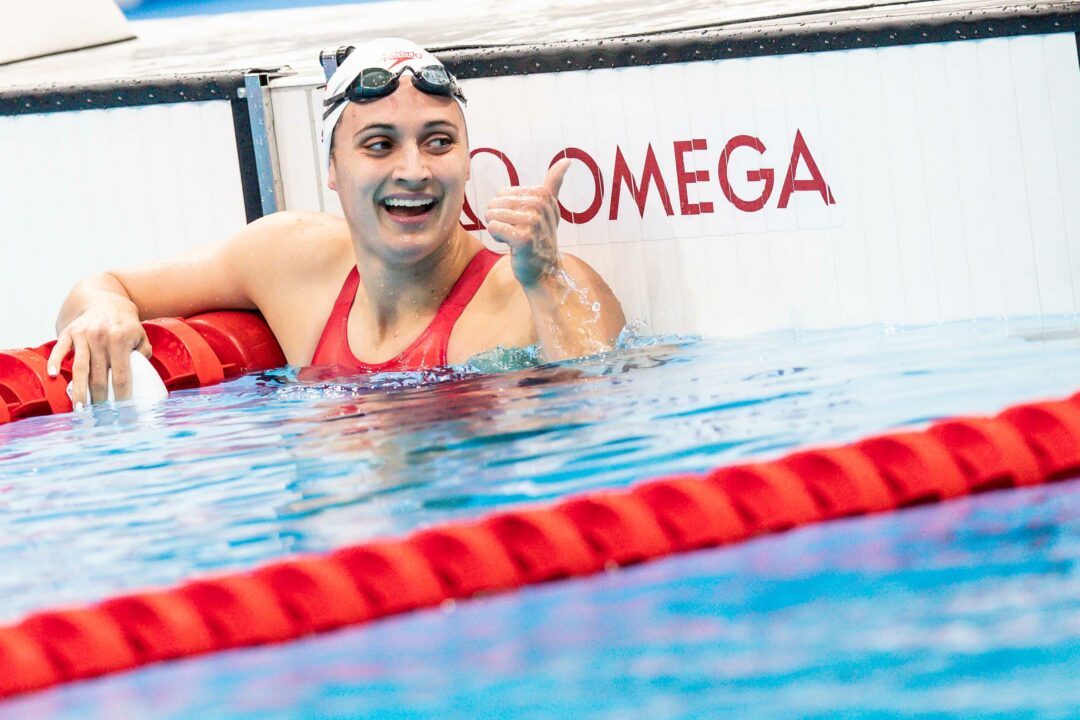 After winning the 100 back last night, Kylie Masse (pictured) will have another chance to compete tonight in the 50 back. Archive photo via Jack Spitser/Spitser Photography

In the women’s 50 back, we will get to see Olympic silver medalist and Canadian record holder Kylie Masse try to win her second event of the meet after placing first in the 100 back last night. Behind her, Ingrid Wilm, Kayla Sanchez, and Mary-Sophie Harvey will be fighting for the second spot as they were seperated by 0.26 seconds in prelims.

Maggie MacNeil, the reigning Olympic champion, will be swimming in the women’s 100 fly. She qualified second in prelims with a time of 58.78. That time is a relatively pedestrian one for a swimmer who has been 55.59 before, so there is a great chance that she could have much more in store for finals. Katerine Savard comes in as the top seed from prelims with a time of 57.86.

On the men’s side, Josh Liendo came 0.18 seconds of his 100 fly Canadian record in prelims, and comes in as the top seed with a time of 51.58. Tonight gives him another shot at cracking the record. Finlay Knox, who broke the 200 IM Canadian record last night, is the second seed with a 53.55.

Despite adding over a second from her prelims time, Nikki Ens took the national title in the women’s 50 back with a time of 1:12.72.

Kylie Masse led from start to finish to win the women’s 50 back with a time of 27.18, crushing her old Canadian record of 27.52 by over three-tenths. Her time is also the ninth-fastest of all time, and just 0.2 seconds off of the world record. Masse was already at the top of the world rankings with her 27.52 from February. This swim marks the second time in the 2021-22 season that Masse has downed her best time in this event.

Ingrid Wilm, who missed out on qualifying for the worlds team by just 0.08 in the 100 back, redeemed herself tonight to take second in a time of 27.80. The swim was faster than her previous personal best of 27.98, and ranks her #5 in the world this year. However, 50 stroke races are not selection events for worlds at this meet, which means that spot on the worlds team is not guaranteed for Wilm despite her going under the FINA ‘A’ cut of 28.22.

Mary-Sophie Harvey , who qualified for worlds in the 200 IM last night, was just 0.02 slower than her prelims time to take third in this event with a 28.32. Kayla Sanchez, who qualified in third during prelims, scratched the event and did not swim in finals.

17-year old Loic Courville Fortin barely dipped under the 26 second barrier to win the men’s 50 back with a time of 25.98. Tayden De Pol, the top Canadian seed out of prelims, finished 0.04 seconds behind him with a 26.02, while Tristan Jankovics, another high schooler, dropped nearly a second from his prelims time to finish third with a 26.37.

None of the men were under the FINA ‘A’ cut tonight.

Kacper Stokowski and Evangelos Makrygiannis, who swam the fastest times in prelims, are not eligibile to swim in the finals as they are not Canadian.

After qualifying for the finals with the second-fastest time, reigning Olympic and World Champion Maggie MacNeil dropped over a second from her prelims time to win in 57.13. She led from start to finish, going out in a 26.88 and slowed down a bit on her back half to close in 30.25. MacNeil’s time sits as the third-fastest in the world behind Zhang Yufei and Claire Curzan.

Katerine Savard, the top qualifier out of prelims, was a little slower in finals with a 58.01. However, that time is still under the FINA ‘A’ standard, securing her a spot on the worlds team. Rebecca Smith was faster than her prelims time of 59.22 to finish third with a 58.76, but was a few tenths shy of the FINA ‘A’ cut.

However, MacNeil said in an interview with CBC that she would not be competing in individual events at worlds this summer to prioritize her mental health.

“It’s hard to stay at the top and that pressure really got to me. I need a chill summer. I don’t want to be out of international competition. I want to train and compete well for Canada but I needed that little bit of a let up I guess,” MacNeil said to CBC. “Your mental and physical health comes before you as an athlete. So they [Swimming Canada] definitely have been thinking of us as a person first which is so important. I’m grateful for that.”

Rising 19-year-old superstar Josh Liendo demolished his Canadian record by over half a second to win the men’s 100 fly with a time of 50.88. He went out fast, opening with a 23.63 split – the fastest in the field by 0.51 seconds. He then closed his race with a 27.25 back half. Liendo’s swim is the second-fastest in the world this year, just behind Naoki Mizunuma’s 50.86.

Finlay Knox, who broke the Canadian record in the 200 IM last night, shaved nearly a second off his previous best time of 52.65 from Canadian Olympic trials last year to finish second in a 51.86. He got under the FINA ‘A’ standard of 51.96 by a tenth of a second, meaning that he will join Liendo to qualify in the event at worlds. Keir Ogilvie was a few tenths faster than his prelims time to capture third in a 53.49.

16-year-old Abby Dunford, who trains with the Sandpipers of Nevada, dropped a whopping 18 seconds from her previous best time of 16:38.75 to win the women’s 1500 free with a time of 16:20.26. She was under the FINA ‘A’ standard of 16:29.57 to qualify for worlds this summer, her first international meet swimming for Team Canada. Dunford’s time puts her just outside the top ten in the world this year.

Katrina Bellio, a UCLA commit for the Class of 2026, finished second in a 16:34.23. Bellio represented Canada at the Tokyo Olympics and finished 20th with a time of 16:24.37, but her time from tonight will not qualify for world championships this summer. Emma Finlin broke 17 minutes for the first time to swim to a third place finish with a 16:42.09.

Eric Brown was the only man under 8 minutes to win the men’s 800 free. Brown and Alex Axon were close together in the first half of the race, but Brown pulled ahead to take the win by 2.56 seconds. Brown shed a few tenths from his best time of 7:59.87 from Olympic trials last year, but was far from the FINA ‘A’ cut of 7:53.68. Brown is committed to the University of Florida, and will be competing for their strong men’s distance squad starting in the 2022-23 school year.

Axon dropped over two seconds from his personal best to take second in 8:02.24. Sebastian Paulins was over 15 seconds faster than his best time, placing third with a 8:05.55.

Philippe Vachon was just over a second off of his Canadian record to win the men’s para 400 free with a time of 4:38.92.

Canadian record holder S14 Angela Marina was just off her prelims time by a little less than a second, but still won the 200 free with a time of 2:17.70.

Mr. Worldwide but in swimming

There is only 1 Mister Worldwide with 3 different passports (plus born in Japan). 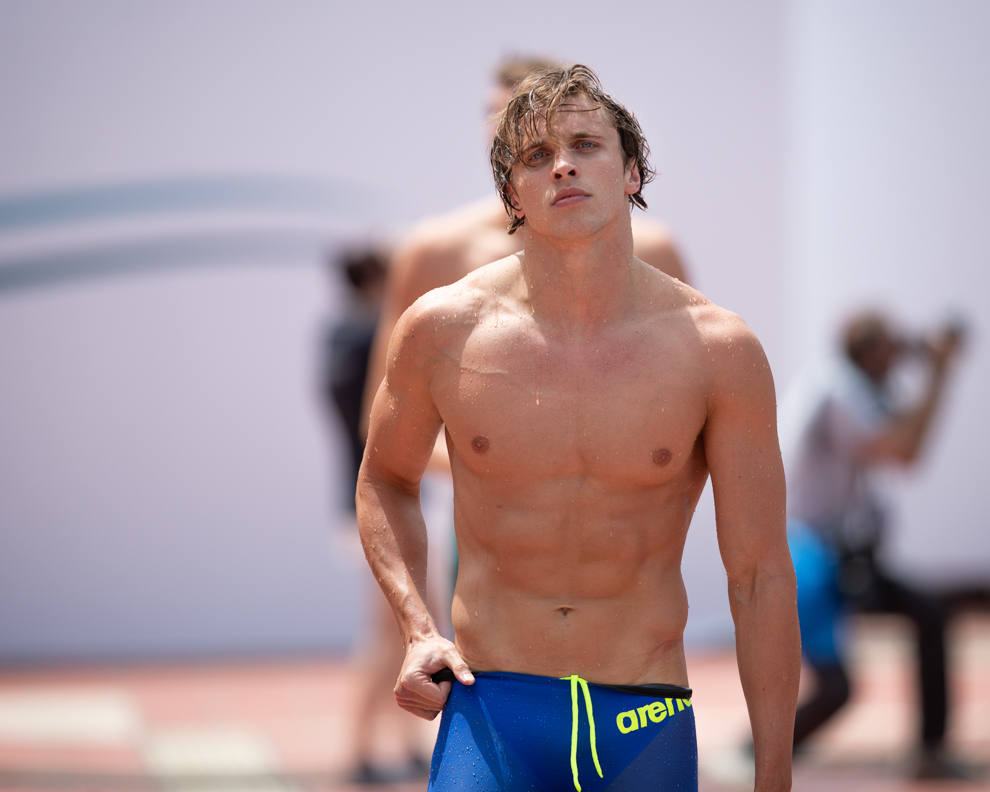 I stand to be corrected.

Who do Liendo and Knox swim for? Just local club teams, or universities or national training centers?

They train at national centre HPC Ontario. Josh reps his home club and Finlay reps the main club that swims at that pool. Finlay is from Okotoks (20 min south of Calgary) & raced Cole Pratt as a kid.

They both train at the High Performance Centre in Toronto

Whoever was the one that said Liendo had a shot at going under 51 tonight well you were right. Man’s just joined the sub 51 club and now has a shot at a medal in the event. This season is Liendo’s breakout season onto the world stage.

The guy has some mad confidence since winning medals individually at SC Worlds. I’m glad it materialized!

This probably means that he’s going to drop a 47.XX flat start 100 free later this week

What’s the story on Abby Dunford? Was she raised in the US, but has Canadian citizenship, a la Taylor and Sydney?

Great swim for her!

at the sandpipers trains with bella sims, katie grimes, and used to swim with erica sullivan

I know that, but wondering if she’s from the US and has Canadian citizenship from her parents or moved there to train.

I know she’s from Canada, and I believe her family moved to Louisiana. She trains in Nevada but represents Canada at the international level

Born in Canada, lived in Louisiana, moved to Las Vegas to train with the Sandpipers.

It seems that McNeil will not compete in any individual events at Worlds.

Props to her for putting herself first! Neccesary in such a grueling sport.

Also in the article is the news that she slipped and fell on the deck at NCAAs and has a slight elbow fracture.

We know she probably wants to emulate Sarah Sjostrom but c’mon, that’s taking it too far 😉

I fractured my elbow last week. Sadly, I won’t be winning gold in Paris or anywhere else.

I think it is amazing that Ms Mc Neil has the strength and support to stand up and say this. Best wishes to her.

Two guys under the 100 fly cut! Nice to see those two really getting up there.

Would love to see another few guys take a big step forward at this meet as well.

Can’t remember the last time Canada had 2 world-class 100flyers, this is great. And they both excel at other events too.