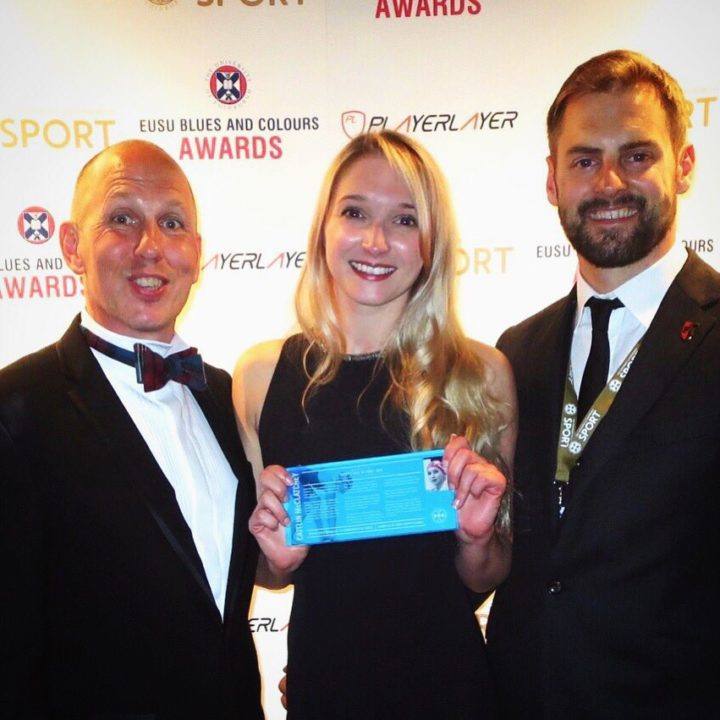 Retired British swimmer Caitlin McClatchey was inducted into the University of Edinburgh’s Hall of Fame this week. 3-time Olympian McClatchey, along with shooter Donald McIntosh and women’s rugby player Heather Lockhart, were welcomed to the storied Scottish university’s hall of fame by Senior Vice Principal Charlie Jeffery as part of the school’s Blues and Colours sports dinner.

McClatchey made her first international squad with Great Britain in 2004 heading to the Athens Game as a member of the 4x200m freestyle relay that finished fifth. A year later she finished an impressive third in the 400m freestyle at the 2005 World Championships in Montreal.

In 2007 McClatchey made the final in the 200m freestyle at the World Championships, finishing seventh overall. At the 2008 Olympic Games in Beijing, she saw a similar result, finishing sixth in the Olympic final.

Overall, 2008 did prove to be a strong year for McClatchey, as she took her talents to the short course World Championships where she finished third in the 200m freestyle and took home two relay medals. Less than a year later at the 2009 long course world championships, she grabbed a bronze medal as a member of the British 4x200m freestyle relay squad.

In her last Olympic appearance, McClatchey finished seventh in the 200m freestyle final.

The 2013 Universiade Games gave way to her last international medals. There, McClatchey took home bronze medals in both the 200m freestyle and 400m freestyle.

Of the Hall of Fame induction honor, Edinburgh’s Director of Sport and Exercise, Jim Aitken, commented, “All three Hall of Fame inductees have demonstrated excellence in their respective sports to earn this honour, which is the highest sporting accolade the University can give. The Sports Hall of Fame celebrates inspirational athletes who have excelled in their chosen sport and underlines the University’s commitment to athletic achievement.”

Keeping it in the family, McClatchey joined her uncle, Alan McClatchey in the school’s hall of fame. Alan was an Olympic bronze medalist in swimming at the 1976 Olympic Games.